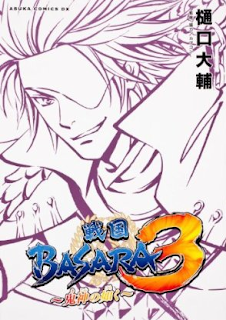 It's time for another shoujo manga review!

Originally running in Kadokawa Shoten's Monthly Asuka magazine from May 2012, the four chapters of Sengoku Basara 3 ~Kijin No Gotoku~ were compiled into a single 141-page volume under the Asuka Comics DX label in 22nd September 2012. This book is priced at ¥588 and can still be purchased today from all good import stores such as CD Japan, Yesasia, HMV or Amazon Japan.

For those who want to see more of the art style before purchasing, there's a free 16-page preview here on the manga's official website along with character profiles for Motochika, Motonari and Tsuruhime. The simple storyline is very similar to Motochika's Sengoku Basara 3 scenario.

As the fateful battle for the future of Japan takes place elsewhere between Ieyasu and Hideyoshi, Motochika is feeling quite pleased with himself; he has a good relationship with the ambitious Ieyasu and the future of the land looks promising. His relaxation doesn't last long, however; he finds himself right in the middle of an argument with Tsuruhime, unintentionally humiliating her by staring at her underwear when she falls over. They decide to race around Japan to settle their dispute.

While he's still revelling in the thrill of cheating, Motonari turns up and informs Motochika that Shikoku has been attacked - by Ieyasu. Motochika rushes back home just in time to see his men and their families strewn over the ground, dead bodies and wounded villagers everywhere. Unable to understand why his friend Ieyasu would do such a cruel thing, Motochika curses his name.

The second chapter opens with Motochika paying his old enemy Motonari a visit at home to find out more about the attack. Motonari reveals that he was a victim too, and he has reason to suspect that Ieyasu was responsible. He suggests that Motochika joins forces with Mitsunari, a man who is talking to warlords in order to raise an army and settle his own grudge against Ieyasu. Motochika doesn't trust Motonari at all, but his suggestion is tempting...

Motochika permits his men to send an ill-fated envoy to Ieyasu to find out what happened once and for all, and then heads to Saika territory to prepare for battle. Magoichi almost manages to talk some sense into him until an enraged Mitsunari arrives, immediately attacking the two of them. The chapter ends with Motochika agreeing to join Mitsunari in his quest for vengeance as Magoichi looks on, horrified.

Next, Motochika visiting Masamune to confront him about Ieyasu. He has to go through Kojuurou first, who isn't willing to let him storm into their castle in his usual style. After even Masamune seems convinced that Motochika is being too hasty, he decides to go straight to Ieyasu's camp and ask him directly. I won't spoil what happens next; it plays out very similarly to the story in the game series.

The bonus features on offer are sparse, limited to a single colour introductory page and a very short afterword from the author. Lift off the dust jacket, however, and you'll find a hidden illustration of Yukimura and Shingen bellowing at one another. Higuchi mentioned that she loved Oyakata-sama in her profile so she evidently managed to squeeze him in somewhere!

Overall, I feel that this manga series suffers greatly from trying to include far too many characters from the Sengoku Basara universe. Although it's Motochika's story, there are cameos from all of the other leads except for Yukimura and it often feels as though Aniki is pushed to the background. Tsuruhime vanishes after the first arc and Yoshitsugu's role in the plot is barely mentioned, while Mitsunari's storyline is dropped halfway without ever being resolved. And as much as I love Masamune and Kojuurou, their inclusion felt completely unnecessary. Four short chapters aren't enough to give this huge roster time to spread its wings. This is very different to the impression I had reading Sengoku Basara 2 ~Rakka Ryuusui No Shou~ with its much tighter plot.

The other criticism I have about this book is that the tone is very light in spite of the cool title and cover artwork. People die and blood flows freely, yet the actual fights feel more like mock battles full of goofy moments. This is partly because of the simple, clean artwork, and partly because Aniki seems a bit, well, weak. He struggles in every single fight no matter who he's facing right up until the finale; the only times he gets to land a blow seem to be when his opponents are intentionally letting him win. I know that this kind of manga often features a struggling protagonist, but here it's so exaggerated that it takes away all of the suspense.

On the other hand, one of the strengths of this retelling is that it provides more background to the story. In the original Sengoku Basara 3 game, Motochika's sudden rage towards Ieyasu seemed rather abrupt - and downright confusing for those who hadn't played the earlier games in the series where their friendship was established. Here, everything is explained in chronological order and the scenes with Motochika's people under attack make it much easier to understand his rage at discovering them all dead. Motonari's trick is more elaborate, bloody and convincing on paper.

Ultimately, Sengoku Basara 3 ~Kijin No Gotoku~ is a fun one-shot book which can be enjoyed as light entertainment. It's short and simple to read; there's even furigana over all of the kanji to help younger readers and foreigners who are still learning Japanese. If you've already played Sengoku Basara 3, you'll find that this is a retread of a familiar story with a simpler art style than most of the other spin-off manga. If you've never played the games, however, it might make an interesting primer for Motochika's storyline. Perhaps it will encourage a new generation of readers to try the original series one day.
at 10:41:00 am