It's Saturday once again, which means that the third of the five weekly Sengoku Basara 4 preorder events has now taken place in Yodobashi Camera, Hakata. There was a presentation by game producer Kobayashi 'KobaP' Hiroyuki and another video was unveiled.

Here is the usual collection of rumours from Twitter, 2ch and other sources. As Hakata is located less centrally it sounds as though there were fewer fans in attendance than there were last week - or fewer fans who use social media networks. It's really tough to separate the rumours from the facts with so few reliable sources.
I'll add to the list if I find anything else of interest.

Even though the event information was weak, while I was searching I stumbled upon this new post on the Sony Playstation blog. There's the first in a series of weird videos with KobaP at the bottom.

The cover artwork for the upcoming Butai Sengoku Basara Bushou Matsuri 2013 event DVD is now available. I still have no idea whether the Dais Shop version is sticking to its 'late November' date now that a general release is on the way. I can't wait to see Ikeda Shuuichi's appearance at last! 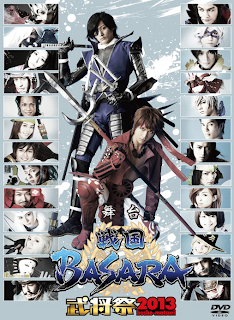 With the news out of the way, I'm going to delve back into the most recent gameplay video and translate more of the menu system. You can click on the pictures to see them at full size.

We discovered that you could level characters up out of battle a few days ago and the latest video revealed exactly how it works. First, you need to select it from the menu in the Battle Preparation screen. Here's an annotated version. 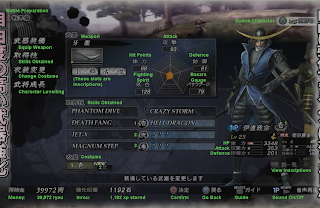 Next, here's a screenshot of the Character Levelling interface. For an explanation of how the Inrou of Enhancement stores experience, please consult the first of this week's translation posts. I think everything else is self-explanatory. 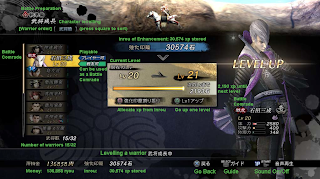 You can access Weapon Enhancement through the Basara-ya Shop using the menu screens I translated in my previous post, or by going to Battle Preparation → Equip Weapon then pressing R1 once to switch screens. You can see which screen you're in by checking the navigation in the top left corner.

This next one looks intimidating but it's just a matter of learning the layout. Square controls the weapon's Rarity level, which affects its maximum stats. Triangle boosts stats by random amounts using your stock of fortune hammers, while the Circle button lets you increase individual stats with your stock of whetstones. 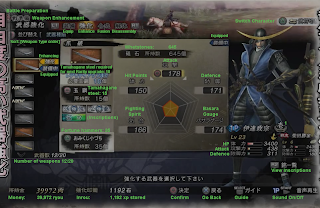 I've mentioned the flat, rectangular items you can receive as rewards or buy from the in-game shop a few times now and they appear to be called Play Books or Game Books. In this case I'm going with the former for my translations since the word 'game' is used a lot elsewhere. I've adjusted the annotations on the march screen in my previous translation post to take this decision into account.

In the bottom left of the main march screen is a section labelled Play Settings which you can access by pressing L1. I believe that this will take you to your Play Books, allowing you to set up to three of them in the slots below. It looks as though they'll work like the accessories did in the previous games.

Here's a list of the books and their effects that I've seen so far. Since the icons all seem to look the same anyway, I'm going to present the translations as a list instead of a picture to make it easier to update over time.

The effect and bonus reward for 'Enemy soldier recovery' is also shown: enemies gradually regain their hit points, and if you win you get a 200% bonus to the money you earned.

To add Inscriptions to your weapons, you need to use the Weapon Fusion system. It can be found in the same menu as Weapon Enhancement above. First, choose your weapon from the list as usual. The blue label means the weapon is equipped, the yellow label means you're performing the synthesis on that weapon (I'm calling it the 'base weapon'), and the red label is used for the weapon you're using as raw materials for the upgrade. Here's the first Weapon Fusion screen from the video with text annotations in English. 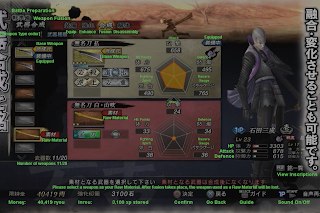 When you've picked the weapon you want to use as your 'raw material', you're taken to the main Weapon Fusion screen. You can move Inscriptions from the 'raw material' weapon to the one you're upgrading. 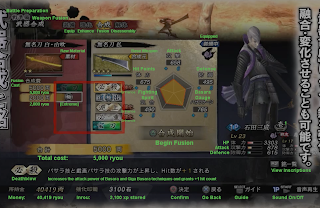 Selecting a slot which already has an Inscription gives the message 'Discard'. Be careful you don't do this unless you want to reclaim that slot!

Certain types of Inscription can be placed on top of others to boost them. The video shows the 'Extreme' Inscription being added to a basic type, making it stronger.

Once you're done, you can press Triangle to complete the fusion, destroying the 'raw material' weapon in the process. Each upgrade has a cost, and you have to pay the total price when the button is pressed.

You can view the table of Inscriptions by pressing R2 when you're in the shop or on the main battle preparation screen, or straight from the Weapon Enhancement menu above.

I've given each individual Inscription a number in this diagram: 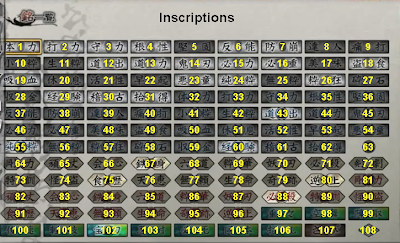 To accompany it, here's the full list of Inscriptions with gaps where the effects weren't shown. As better screenshots and descriptions of the effects become available, I'll revise this and fix any errors: