Today is Saturday, which means that the second Sengoku Basara 4 in-store preorder event was just held in Japan! Game producer Kobayashi 'KobaP' Hiroyuki travelled to Bic Camera in Nagoya to meet fans and present a brand new video. I've been to that branch of Bic Camera a few times before and expect that there were more attendees; it's relatively accessible and the current Butai Sengoku Basara stage play is being performed in the same city all weekend!

Here are the rumours that fans have been sharing about the event from Twitter, 2ch and various blogs. I might add to this later if more details appear at the end of the event.
Update 14:30: A little more news surfaced so here we go!
I expect we'll see the video appear on the Capcom Channel whenever it's ready - last time it went up on Monday, but someone on 2ch suggested it would be Thursday this time. Because today was also the first of the HAL open campus game demo sessions, the Sengoku Basara team has been split to promote the game between two different cities.

This is a rather text-heavy news report so I'll finish with a picture that has been circulating on the official Sengoku Basara Twitter account for the last few days: it's the Yellow-Black Alliance! 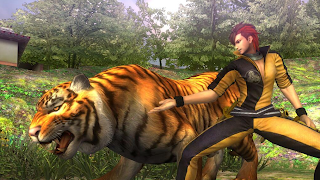 Hoshi Souichirou to appear at the next Basara Matsuri event

The open lottery for tickets to January's Sengoku Basara 4: Basara Matsuri 2014 ~Shinshun No Utage~ event began on Friday, and if it's anything like the fan club lottery a couple of weeks ago it's going to be a real struggle for people to get tickets. There are simply far more people clamouring for a chance to attend than there are seats at the venue!

Capcom decided to exacerbate this situation by helpfully announcing another guest for the event just before the lottery began: popular seiyuu Hoshi Souichirou (Sanada Yukimura) will be attending for the afternoon show only. I bet he'll briefly appear at the evening show too as a secret guest (and Nakai will do the opposite) for old times' sake and to appease the fans who couldn't get a ticket to the right performance.

Until now it was only possible to order the Butai Sengoku Basara Bushou Matsuri 2013 DVD from a limited number of specialist stores, but it seems that a general release (AmiAmi) is coming on 20th December 2013. I'm not sure whether this means that the DVD has slipped from its vague 'late November' release date at the Dais Shop, but I guess I'll find out soon! While ordering through Amazon Japan has the advantage that there's a discount on the price, if I can get my copy earlier then I won't regret having preordered from the official shop.

The Amazon listing also confirms a few details about the release. It will span two DVDs and last 250 minutes; 180 minutes will be the recording of the event while there will also be a generous 70 minutes of extra footage.

Capcom don't intend to let the game's release pass without a ton of merchandise on offer for the fans to buy, and here are the latest additions to shop listings across Japan. 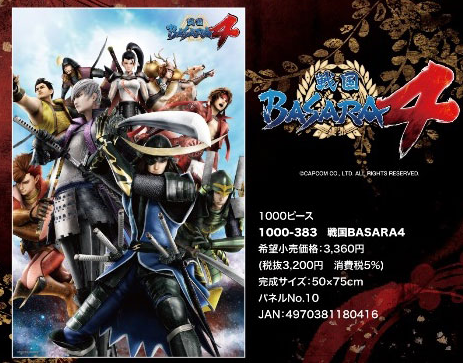 A set of four Sengoku Basara 4 badges. These are pretty cool; they're oversized at 75mm and the designs are better than usual. The badges will be released on 30th January 2014 and they'll cost ¥473 each. Masamune's says "Horse riding is prohibited", Katsuie's is a very glamorous mandala design to go with his theme, Mitsunari's simply says "If it's not about Hideyoshi-sama, I don't care." and Sakon's has an odds/evens gambling theme. 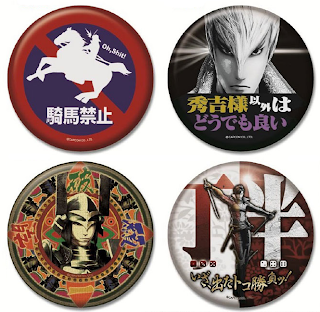 A set of four gorgeous new A4 clear files. They'll be released on 30th January 2014 for ¥368 each. There are designs for Masamune, Sakon, Katsuie and Mitsunari.