Tsuchiura City has added a few more details about their Sengoku Basara tie-in campaign which starts on the 16th March 2013. Today's update covers the stamp rally being run in association with 'Sightseeing City Tsuchiura'. General translated information about the collaboration is here with more details about the museum exhibitions here.

The Gamer website has posted larger sample images of the three clear files that are being given out as rewards. You can pick one for every five stamps you collect.

Clear file type A: Manabe No Sakura (Manabe's Cherry Blossoms)
The characters on the file are Date Masamune and Sanada Yukimura. In the background are the somei-yoshino cherry blossom trees at Manabe Elementary School in Tsuchiura. Some of the trees are said to be over 110 years old. This file represents springtime. 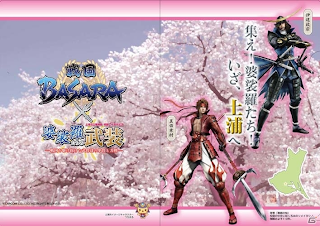 Clear file type B: Renge (Lotus Flowers)
This file features Tokugawa Ieyasu and Ishida Mitsunari. Tsuchiura is particularly famous for the production of renkon (lotus roots) and the picture shows a field of lotus flowers blooming in the summer. 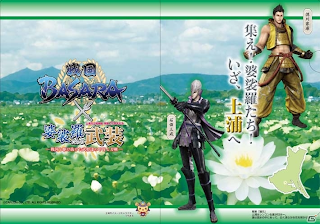 Clear file type C: Hanabi (Fireworks)
Representing the autumn, Tsuchiura hosts one of the three major national fireworks competitions in October every year. The final file has all of the warriors from the Tsuchiura City Museum event on the front with a fireworks display on the reverse. 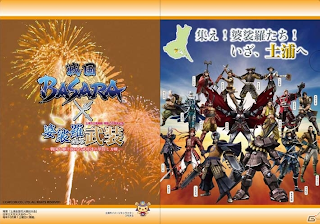 The information for collecting the stamps is now available. To participate, first collect a stamp sheet ('stamp rally daishi') from one of three places: the Tsuchiura City Museum (where the exhibition is being held), the Machikado Kura 'Daitoku' warehouse shop or the tourism stand 'Kirara Kan' at the east exit of Tsuchiura station. On days when the museum is closed the stamp sheets will not be available there. There will be a limited number of 200 stamp sheets issued each day at the other locations.

Once the stamp sheet has been obtained, it's time to collect the stamps from local tourist spots. There are thirty-four locations dotted across the Tsuchiura City area, each marked with a campaign flag (map). Tsuchiura City's mascot character Tsuchimaru is holding a sample flag in the PDF instructions so that tourists know what to look for. The green numbers on the map mark stamp points while the five red locations marked with the letters A-E denote places where the finished stamp sheets can be turned in to claim the prizes. Three of these are the same ones mentioned above which issue the empty stamp sheets; the other two are farther away from the middle of the city: Komachi-No-Sato's Komachi-No-Yakata visitor centre (dedicated to Ono No Komachi) and Kamitakatsu Kaizuka Furusato Rekishi No Hiroba (a historical park). A full list of stamp location information is provided so that visitors can check the opening hours for any shops or museums on their planned route.

Since there are so many participating locations in the central Tsuchiura area and only fifteen are required to collect the full set of clear files, it shouldn't be too difficult. To keep things fair, participants are not allowed to request the same file more than once even if they collect more than five stamps.
at 11:02:00 am