The release information for three of the upcoming manga publications was revealed today. First of all, Sumeragi's Mame Sengoku Basara volume 3 will be released on 29th March 2013 and cost ¥819. Amazon gives the date as 27th March, so I'm going by what e-Capcom says. The cover star this time will be Masamune for the first time. I like the design of the Mame Sengoku Basara books. 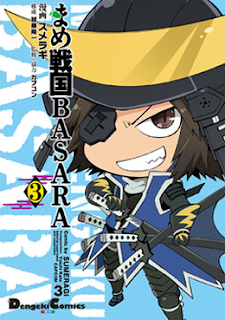 Despite only finding out about it a couple of days ago, the cover has also been revealed for the brand new anthology comic Sengoku Basara Comic Anthology 'Dategun Chronicle'. It comes out on the same day for ¥893. Not much information is available yet other than the fact that the artists will include Sasakura Kou, Arai Karo and Tsutsumi Yoshisada. I'm quite looking forward to seeing the veterans in action; it's been ages since I've seen any new Sengoku Basara artwork by Sasakura even in her doujinshi career. Arai is also contributing to the new Gakuen Basara manga and Tsutsumi illustrated the four Kodansha BOX light novels.

The additional information on the e-Capcom listing notes that the anthology will star Masamune and Kojuurou (obviously) along with appearances by characters such as Yukimura and Hisahide. 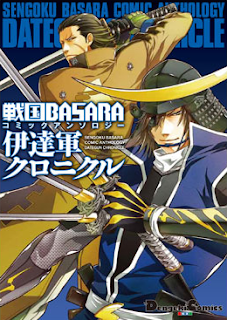 Last but not least, Itou Ryuu's Sengoku Basara 3 Bloody Angel volume 4 will be released on 8th April 2013 for ¥580. It's good to see that Mitsunari's harrowing tale of tragedy has already reached four compiled volumes! The cover fits in well with the rest of the series. 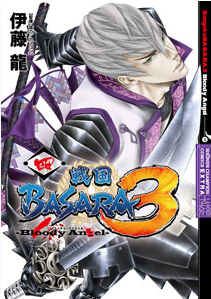 The details of the other upcoming Itou manga, Sengoku Basara 3 Naked Blood, haven't yet been revealed. The full pre-release information for Gakuen Basara 5 manga has already been posted and it can be read here.
at 10:13:00 pm