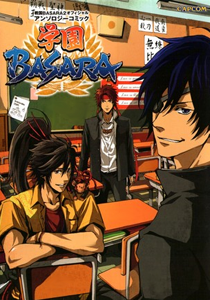 Gakuen Basara is a strange affair; it's a spin-off anthology series which transplants all of the characters from the Sengoku Basara feudal action games into a modern day high school setting. Capcom not only approves of this craziness, they even publish it themselves and carry it in their official merchandise outlets. Most - if not all - of the artists featured in each book are active in the doujinshi community or working on manga professionally, so the production standards are high. I think that this kind of anthology is a charming way to expose passionate manga creators to a new, readymade audience through official channels; with no need to build up complicated character relationships themselves, they can jump straight in with their story and show the reader what they're capable of, while being under Capcom's watchful eye prevents anything too creepy from happening on these pages. It's a pleasant alternative to one-shot BL stories and hyper super-deformed gag manga - not that I have any objection to either of those!

As this is an anthology series, the reader should expect a lot of variety in the art styles and storytelling between each chapter. The creators keep the setting details consistent but the atmosphere can change completely depending on which artist is in control of the story. Some have more attractive artwork while others are heavily stylised; in spite of this not a single one is disappointing, and importantly all of the dialogue is consistent with the characters so it never feels as though it's drifted too far from the core Basara atmosphere.

I do feel that removing the political power and violence of the original in the transition to a high school setting misses the point a little on some basic level. It's a fun diversion, so long as it's not taken as being any more serious than the goofy spin-off that it is. For this post I'm going to review the very first book in the series.

Sengoku Basara 2 Official Anthology Comic: Gakuen Basara came out in July 2007 and covers Sengoku Basara 2. It comes with a beautiful wraparound dust jacket cover by Nari. It's a similar length to the later anthologies in the series at 160 pages, yet there are fewer contributors so the stories are longer. Impressively most of the artists present in this first volume have stuck with the Gakuen Basara world and still actively contribute to the newest volumes six years later. Here is a list of the short stories which appear in the original Gakuen Basara along with their artists and a brief summary of the plot. In addition, rough character design sketches by Sanorin, Yanagi Batoshirou and Kyuugou are included between chapters.

Nekketsu Basara Gakuen (Hot Blooded Basara Gakuen)
Sanorin
The characters are all introduced for the first time against the backdrop of the Gakuen Basara Food Battle eating competition.

Basara Gakuen Guraundo Soudatsusen (Basara Gakuen Ground Scramble)
Kyuugou
With the basic character introductions out of the way, this chapter introduces the other key component of Sengoku Basara: the rivalry between Masamune and Yukimura. Here, the pair fight over the rights to use the school grounds for their respective sports club (baseball for Masamune, soccer for Yukimura).

Choi Aku Nyuumon (Slightly Evil Introduction)
Umeda Seika
The usually sweet Yukimura tries his hand at being a little more unpleasant. And fails, repeatedly. Is he doomed to be a good guy forever?

Seishun Ikinokori Game (Youth Survival Game)
Yanagi Batoshirou
Sasuke's information gathering skills get him into endless trouble when he accepts a request from Keiji to do some research into the school's female pupils.

Seigi No Tatakai! Kono Te De Mamoru Mono (Battle For Justice! That Which These Hands Protect)
Arai Karo
Nagamasa diligently tries to keep the students under control and uphold the school rules for the Oda faction, even when it means confronting the powerful school clubs. He also has to deal with Oichi, who is a little strange.

All in all, Gakuen Basara is a fun spin-off, and the only way you can read Capcom-sanctioned stories involving Tadakatsu playing baseball. I'll post summaries of the next three books shortly; the fifth isn't out yet, so it will come later!
at 2:57:00 pm