News: Tsuchiura City Museum tie-in "Basara-tachi No Busou -The armor and swords of the warlords who ran through the Warring States-"

Not quite the spectacular burst of information I was hoping for, but Capcom have updated their news page with details of a collaboration between Sengoku Basara and the Tsuchiura City Museum in Ibaraki prefecture. The "Basara-tachi No Busou -The armor and swords of the warlords who ran through the Warring States-" event will run between 16th March and 6th May 2013. The idea is that the museum will display weapons, armor and helmets worn by the famous real-life warlords which appear in Sengoku Basara.

Display of armor and weapons
Three of the museum's exhibition rooms will display armaments from warlords who appear in Sengoku Basara.

Sengoku Basara art exhibition
Character illustrations from the series will be on display in a hall in the museum.

Commemorative pictures
Ready to go to war in the exhibition hall will be full-sized replicas linked to the warlords whose armor and blades were on display. Take a commemorative photograph together!

Sengoku Basara stamp rally in 'Sightseeing City Tsuchiura'
Acquire stamps at the city's tourist attractions. By gathering five stamps, you can receive an original clear file. There will be 5,000 clear files available with three different designs. The event will end when there's no more stock left. (Note: Sightseeing City Tsuchiura is the name of a local tourism guide.)

Prizes for those who visit!
The first 10,000 visitors will receive a 'special exhibition official guidebook'.

The museum is open between 9:00 and 17:00 (final admission 16:30) every day of the week except Monday. During the holiday period at the end of April these dates will change slightly; it will be open on Monday 22nd April, 29th April and 6th May and close on the 9th April, 23rd April and 30th April instead. Admission costs ¥600 (¥200 for schoolchildren).

The museum can be accessed by car (free parking available) or by train. The JR Joban line runs from Ueno station in Tokyo to Tsuchiura station and the journey takes 70 minutes using ordinary trains or 50 minutes on an express service. The museum is at Kijou Park, which is a fifteen minute walk away from the station's west exit. If you'd prefer not to walk, you can take a bus from Nishiguchi bus stops 4 and 5 and disembark a minute's walk from the museum at Kijou Kouen.

Alternatively, take the Tsukuba Express (TX) train from Akihabara to Tsukuba station. The train journey takes 45 minutes. Upon reaching Tsukuba, take the bus from Tsukuba Centre bus stop 3 and disembark at Senzokuchou. It's an eight-minute walk from there to the museum.

Tsuchiura isn't very far from central Tokyo; I'd be interested to hear from anyone who visits the museum!

The only other tidbit today came to my attention just after I originally posted the news above. It's an even more tenuous link to the series: the Capcom Unity Japan page on Facebook is running a New Year prize draw which will close tomorrow at midnight. I didn't even know there was a Capcom Unity Japan presence on Facebook in the first place, but it seems they have competitions on a regular basis.

Of the five people who like the page and apply for the prize draw, one will receive a Sengoku Basara goody bag containing a complete set of eight plastic Sengoku Basara keychains and a pair of Masamune/Yukimura plushies. The other four prizes relate to Monster Hunter, Biohazard (Resident Evil) and Gyakuten Saiban (Ace Attorney). All you have to do it 'Like' their page and choose which prize bag you want to try for, granting permission to their app when asked. Please note that prizes can only be posted to Japanese addresses. 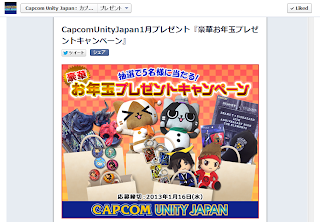