I was sniffing around earlier and came across another Sengoku Basara manga listing for this month with very little information yet revealed. Sengoku Basara Comic Anthology 'Dategun Chronicle' (tentative title) is listed on quite a few online shops as a preorder with a release date of 27th March 2013, priced at ¥893. It's from ASCII Media Works/Dengeki Comics EX/Capcom. A new anthology comic themed around the Date forces? It's been a while since any official anthologies have seen a release, other than Gakuen Basara. I'm intrigued. Along with Naked Blood and Mame Sengoku Basara 3, this makes a total of three manga volumes set for release in late March/early April which still haven't been formally announced.

The rest of today's information is for fan club members only, but I am translating it anyway as it might be of interest to a more general audience too.

Unexpectedly, the shipment of this week's official Sengoku Basara fan club 'Eiyuu No Kai' newsletter was delayed at the last minute. No specific reason was given, however, the main homepage has updated in the meantime to reveal that fan club members can apply for tickets to the long-awaited Sengoku Basara Takarazuka show which starts in mid-June 2013. The fan club ticket lottery runs from the 8th until the 14th April 2013, with the lottery winners receiving their notifications on the 16th April. Expect general tickets to go on sale soon, once all of the various fan club members have had their chance to apply.

Maybe we'll finally get the first glimpses of the Takarazuka actresses in costume at Basara Matsuri 2013 ~Haru No Jin~?

The only other newsworthy happening today is that the Eiyuu No Kai 'Basara-ya' shop will be selling exclusive Mame Sengoku Basara t-shirts for fan club members. There are four designs and each is available in a choice of medium or large sizes. The t-shirts will ship in mid-May 2013. 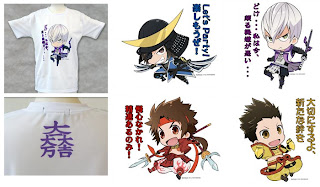