I was looking at the search terms visitors use to find my silly blog recently, and amongst all of the searches for "kintama" and topless pictures of Yamato from Sukitte Ii Na Yo, one stood out like a sore thumb:

Sadly, although I write about all kinds of things that kind of content wasn't available here. I'm really sorry for disappointing whoever was searching for such an amazing website; there's no way that photographs of my latest BL doujinshi shipments can fill the same void.

Having said that, what a great idea it is for a new blog post! So without further ado, I want to make a list with pictures wherever possible. Please leave a comment if you know any other references or parodies which I've missed. Manga is fine too, but let's ignore official guest appearances by Sengoku Basara characters in other media (e.g. game crossovers) or the list will be too long to manage. General parodies of feudal warlords don't count either, it has to specifically be the Sengoku Basara version of a character.

Chronicles Of The Going Home Club (Kitakubu Katsudou Kiroku) episode 2
(Added 11/07/2013)
A new addition to the list (two within the space of a week)!  You can check it for yourself at the 3:31 timestamp on Crunchyroll. The characters are discussing the unifiers of the Sengoku period and somehow Masamune pops up mid-conversation. 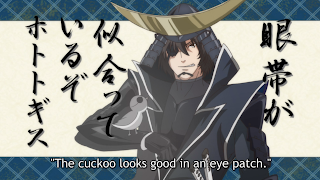 Genshiken Nidaime (Genshiken second season) episode 1
(Added 07/07/2013)
Production I.G. clearly couldn't resist slipping a Sengoku Basara doujinshi into the pile of books which appears during the Genshiken Nidaime opening sequence. You can watch it on Crunchyroll at the 4:00 mark to see for yourself. 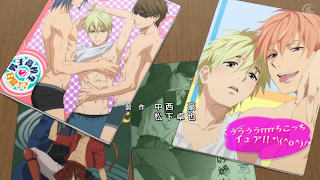 These books also look mildly familiar later in the episode (picture take at the 7:56 mark)... 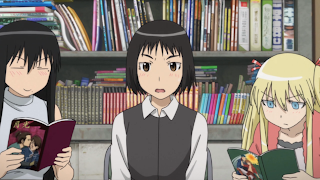 We occasionally get Sengoku Basara references in background merchandise throughout the series - especially whenever Rika's room is shown.

Genshiken Nidaime (Genshiken second season) episode 6
(Added 10/08/2013)
The very end of this episode (23:16) has a preview for episode 7, which contains this shot. It seems to be a confrontation between a monkey-like Toyotomi Hideyoshi (dressed in his real historical helmet) and Sengoku Basara's version of Date Masamune. At a school. I think it counts. 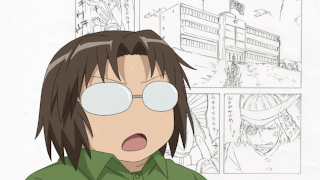 Gintama episode 184
Gintama has a lot of excuses to parody Sengoku Basara. For one thing, it's a samurai show too (even if it's set in a completely different period), and for another, Hijikata Toushirou is voiced by Masamune's seiyuu, Nakai Kazuya. In this scene, the characters are squabbling about historical depictions of famous people. To make things even weirder, the guy who makes the SenBasa reference is Katsura - and he's voiced by Ishida Akira, who also plays Sengoku Basara's cunning Takenaka Hanbee. 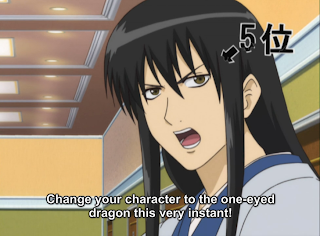 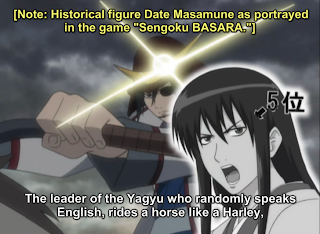 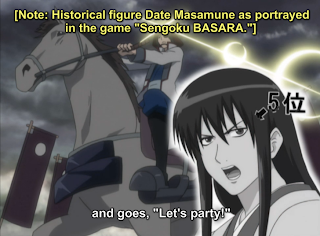 Gintama streams with English subtitles on Crunchyroll, so you can see the episode in context here just after the 10:30 mark. It's part of an ongoing, very funny story arc which starts here, if you're a little more patient.

Gintama' episode 241
Leaving it at that wasn't enough for the Gintama team, and so the Masamune references returned with a vengeance in a later arc. 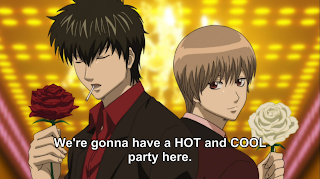 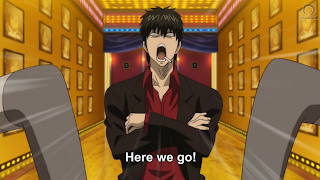 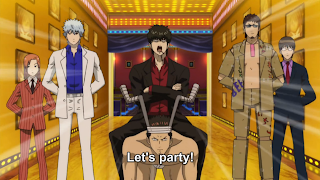 You can watch the episode on Crunchyroll here. The scene starts just after the 17:00 mark.

Kuroko No Basket episode ???
(Added 24/12/2015)
I haven't seen this one myself, but an episode from the third season has an Ieyasu reference in the ending sequence. Credit goes to @jyocchi44.

Maria†Holic Alive episode 6
SHAFT's sequel to the original Maria†Holic came out just as Sengoku Basara was at the peak of its popularity. They needed an example of a series popular with girls for one of many discussions about the history boom in Japan. Here's what they went with at around 3:48 in the episode: 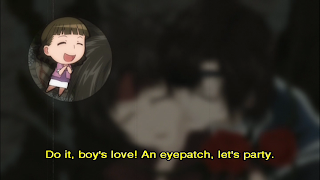 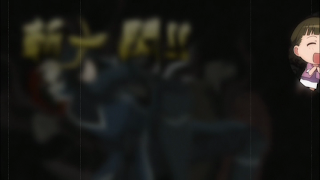 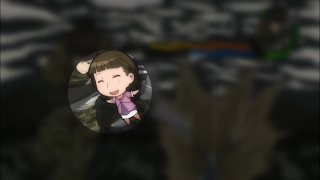 It's very hard to tell what's going on from the screenshots I took; the spotlight pans across the three images, giving a clear view of Yukimura's headband, Sasuke's face and torso and Masamune's, uh, eyelashes. Maria†Holic alive is available on DVD with English subtitles from Sentai Filmworks.