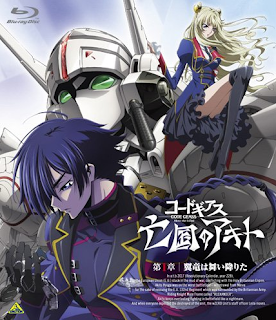 After the enormous success of the original anime Code Geass: Hangyaku No Lelouch (Code Geass: Lelouch Of The Rebellion), it was only a matter of time before its makers would try to expand the universe they'd created. Unlike 2012's fluffy spin-off, Nunnally In Wonderland, Akito The Exiled is a serious mini-series with an brand new cast.

The Code Geass television series told a self-contained story which didn't require further expansion, so this follow-up isn't a sequel and doesn't cheapen what came before it. Instead, Sunrise has chosen to produce a four episode OAV set on a different continent to the television series, with a completely different struggle as its backdrop. The events which unfolded in the television series are mentioned in the dialogue as distant world affairs, but for the most part Code Geass: Akito The Exiled stands alone.

Changing all of the characters would usually be a risky thing to do. It helps that Code Geass already had a vast roster of characters in the first place to draw from; whether you warm to the newcomers probably depends to a large extent on whether you were watching the television series for Lelouch himself or for the plot and supporting cast. The new characters have charms of their own, while being far less melodramatic than the old hero.

Another potentially risky decision on the creators' part is that this new series has a much more serious tone than Lelouch's story. The original Code Geass can only truly be enjoyed if you can suspend your disbelief from time to time as the story lurches between tragic and farcical. This OAV takes a different approach and sticks firmly to a more solemn plot. There's no room in its short run time for school hijinks; this is a story about war, persecution and politics. If anything, it reminded me a little of a simpler Gundam 00.


The setting this time is Europe, which confusingly means that everyone keeps talking about "Europia United", an alternate future version of the E.U. - I was certain that "Europian" was a spelling error in the subtitles until I realised that it was probably deliberate. To make things seem even more complicated, the enemy is Euro Britannia, the European front of the Holy Britannian Empire. The first episode doesn't expand on things in much detail, instead laying the groundwork for the battles to come by introducing the new main characters and the persecution of Japanese nationals overseas. Even the series' trademark geass powers barely appear at all.

I was startled when the episode came to an end as the fifty minutes had flown by with very little appearing to have happened. The next episode preview which follows is a dreadful tease with a glimpse of a familiar face from Lelouch's story. With the character introductions complete, it looks as though things are going to become much more dramatic from now on. 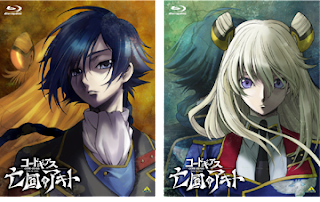 Visually, the new series is lush. The switch to computer-generated imagery during battle scenes is well done, if rather noticeable. The designs are great, too; the new lead female is sexy with endless legs and Akito himself is a typically attractive (and scrawny) young man with a permanent pout. They'd fit in perfectly next to the original cast. 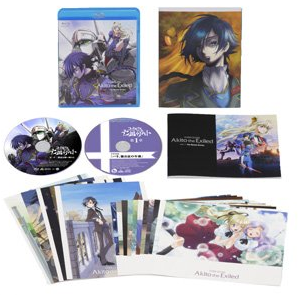 Code Geass: Boukoku No Akito is available now as either a limited or standard edition Blu-ray. Both versions have English subtitles on the disc, while the limited edition also has an audio commentary, drama CD, deluxe packaging with a textured slipcase, a 24-page booklet of liner notes and a collection of art cards. There's no mention of any region lock on the packaging, though if they are locked it will be to region A, just like standard American anime releases. According to Amazon, the DVD edition also comes with English subtitles. However, I would definitely recommend paying the extra thousand yen for the BD if possible; this is a series which looks stunning in high definition.

With Australia's Madman Entertainment having already staked a claim on the rights to Akito The Exiled and European anime distributor Kaze recently rescuing the original Code Geass: Lelouch Of The Rebellion in the UK, I imagine it's only a matter of time before the other western licensors announce a local edition of this new series. With it coming out one episode at a time in Japan, there'll be pressure from the overseas marketplace to wait until more episodes are available before producing a localised version; buyers have the choice to either wait for that and see the series relatively cheaply, or pick up this excellent Japanese edition complete with English subtitles and get involved with this exciting new Code Geass spin-off sooner rather than later. I already made my choice, and look forward to episode two finally making its way to Blu-ray later this year.
at 10:32:00 am