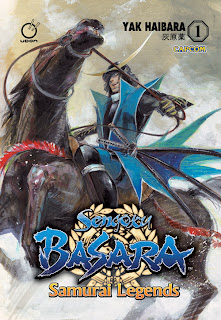 Sengoku Basara: Samurai Legends is the official name of the English translation of Haibara Yak's Sengoku Basara 2 manga, originally serialised in the Japanese magazine Dengeki Maou from March 2007. Four compiled manga volumes subsequently went on sale, with the last one being released in February 2009.

The English adaptation comes courtesy of Udon Entertainment, who have been the sole beacon of hope for English-speaking Sengoku Basara fans lately - Capcom's own US subsidiaries appear to have given up on the series entirely due to its unspectacular performance outside Japan.

Udon's release is a little different to the original Japanese edition, spreading the content over two books rather than four. This is a good deal as the price for the two books isn't much higher than usual for a niche manga title when buying overseas and you get a lot of Sengoku Basara for your money; it's definitely good value for such thick volumes. My biggest concern with the books being combined like this was missing out on some of the earlier Japanese cover art (the picture of Keiji is a particular favourite). As it happens there was nothing to worry about. The US release includes the original illustrations as colour inserts at the start of the book along with some other artwork from Haibara, and my inner nitpicker was pleased to see a note to acknowledge the original game and explain why the title was changed.

Haibara's art style is confident and stylish, a perfect fit for the series' hallmark over-the-top action. It's also very sexy; I'd think both male and female fans can enjoy reading this series without any concerns about their favourite character receiving the proper amount of attention. Since the plot of Sengoku Basara 2 revolves around the rise of the Toyotomi forces, Hideyoshi and Hanbee take centre stage as powerful antagonists with Masamune, Keiji and Yukimura facing off against them - separately, of course. Kojuurou and Sasuke are present too, as are Kasuga, Kenshin and Shingen. The two older warlords get to appear in what is probably the best fight in the whole first book where Haibara captured Kenshin's dangerous grace so elegantly that it left a lasting impression on me long after I'd finished reading.

The second book shifts the plot away from Kawanakajima and expands the role of the Maeda clan. As a result, Yukimura takes a back seat for much of volume two, stepping aside to give Keiji more time to reconcile his complicated relationship with Hideyoshi. Fans of the anime will be surprised by how a few adjustments to the plot can make the same confrontations play out so differently.

Being the most popular character in the series, Masamune's forces dominate the main storyline at times - yet at others he's completely absent for chapters at a time, and Keiji's role is explored much better. I really liked the way that the armies were portrayed. Tactical discussions receive just as much attention as riding around performing ridiculous feats of mass destruction, and the relationships between the warlords, their soldiers and even the common townspeople are explored in the background.

It's worth mentioning that Mitsuhide, Motonari, Motochika, Nagamasa, Oichi and even Mitsuhide make very brief appearances in addition to the characters I've already mentioned. The manga was written before Sengoku Basara 3 came along to confirm the series' canon ending to the Toyotomi conflict, so the plot deviates from what fans might expect at times. This is not always a bad thing.

One of the things I love about the way Sengoku Basara portrays the period in which it is set is that almost every faction is easy to root for. Even though Masamune is the central figure when it comes to popularity, Haibara doesn't hold back, depicting him as an aggressive, cocky upstart who makes mistakes and could easily be playing the part of a villain. Other characters too acknowledge that what they're doing isn't always right or the most honourable approach they could be taking. If the manga had been written just a little differently, it would be Hideyoshi's forces which the reader would be cheering for as he advances across the nation. This aspect of the series is strongest of all when the heroes' loyal subjects are shown; Hanbee, Kasuga, Yukimura, Sasuke and Kojuurou all share a deep devotion to their masters which is rarely seen in the real world. The commanders of Sengoku Basara must have been incredible people to inspire such unwavering dedication. 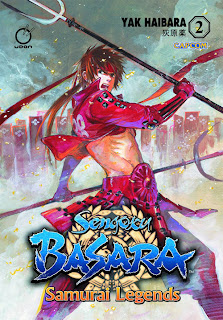 The translation of the English adaptation is particularly good for the most part, and they've retained some flavour of the original by keeping the original Japanese for the maps which appear from time to time and adding the English translations as extra labels. This might be awkward in most series, but Sengoku Basara is a period piece and it's likely its readers will have more interest in Japanese culture than usual. The old-fashioned Sengoku-era names for the regions are slightly exotic to Japanese readers as well, and I felt it was appropriate to keep that feeling intact here.

There is only one aspect of the English adaptation I disagree with, and it's that the "Danna~" which Sasuke uses to address most of the other characters has been translated as "Guv". This is probably only an issue because I am from the UK, but to me the word seems dreadfully out of place in an otherwise strong script. The connotations of "Guv" are quite specific and it evokes an image of a shady Cockney gentleman, which isn't how I think of Sasuke! I can understand why the translator made this choice as they were trying to retain a sense of the myriad forms of address which pepper the dialogue of Sengoku Basara, and there simply aren't enough equivalents in English to cover all of the different words used in the original. However, I really wish they had chosen a less silly word.

Overall though, the translation is great and the script matches the action well. There's a lot of variety in the styles of English used, depending on which character is speaking. There are also a few things that are difficult to get used to after being used to hearing them in Japanese, such as "Kawanaka Island" instead of "Kawanakajima" and "Kei" instead of the familiar "Kei-chan" - even leaving the old-fashioned honourifics intact to accommodate "Kei-chan" would make the dialogue difficult to follow for newcomers to the series. Names are presented in western order and with simplified romanisation to match the English version of Sengoku Basara: Samurai Heroes (Sengoku Basara 3). Because a western audience won't necessarily have the same familiarity with Japanese history as the readers in its home country, it would have been a challenging manga to translate.

The first volume of Sengoku Basara: Samurai Legends came out on 24th April 2012 (Amazon USA). Volume two was released on 19th February 2013 after suffering a few production delays (Amazon USA). The series is now complete. Udon have obligingly provided generous samples of the artwork in the form of previews of volumes one and two.

In summary, Udon have given the excellent Sengoku Basara 2 manga the English adaptation it deserves, giving me hope that future volumes of manga might eventually make their way to the west. All English-speaking samurai fans owe it to themselves to look out for these two books.
at 1:48:00 pm