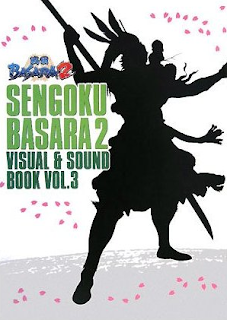 The book I'm reviewing today is the third and final volume which was based on Sengoku Basara 2 (the game, rather than the anime adaptation). There is no continuity between the books so fans can buy them in any order if they don't want to collect the set.

Volume three starts off with 'Gravure of Heroes' as usual, but the creators presumably realised that they'd blazed through most of the popular characters already in the first two collections. This time the illustrations cover a wider variety of characters with a number of stunning group portraits. The artists who contribute paintings are Shimotsuki Kairi, Yumeji Kiriko, Kugawara Kadzuki, Nagasawa Shin, Kazuaki, Wolfina, Kyuugou, Kazama Raita, Tobashi Kotomi, Shishizaru, Hitaki and Haibara Yak. The artists outdid themselves this time; the range of characters chosen was excellent and all of the pictures are on another level compared to the earlier books, even in the absence of a few of my favourite artists. The female characters are well represented too.

Next comes a short manga by Shimotsuki Kairi. Better known now for her own hit Sengoku-era manga Brave 10, Shimotsuki has worked on a number of BL series in the past as well as Capcom's three-volume Sengoku Basara: Ranse Ranbu manga back in 2006 (available from Amazon Japan: 1, 2, 3). The manga included in the Sengoku Basara 2 Visual & Sound Book Vol. 3 is an original story based on Sengoku Basara 2 called Chuushin No Kyouji ('The dignity of a loyal subject'). With a title like that, it's only natural that the simple, self-contained story revolves around the Dragon's right eye, Katakura Kojuurou.

The Chuushin No Kyouji manga is the main feature of the book and it's what the CD ties into. Seiyuu Nakai Kazuya (Date Masamune), Morikawa Toshiyuki (Katakura Kojuurou), Hoshi Souichirou (Sanada Yukimura) and Koyasu Takehito (Sarutobi Sasuke) all appear, as does series narrator Watanabe Hideo (or someone who sounds very much like him - the role is not credited). While he isn't voiced, Fuuma Kotarou also has some scenes in the manga.

Since a lot of the manga is visual in nature, the audio script is longer with extra narration and dialogue so that it can stand alone and still make sense. It occurred to me when reading that these CDs would probably be quite interesting for students of Japanese who can follow along with the book. They'd need to look out for the idiosyncratic speech patterns of the characters; still, a little challenge surely makes learning all the more fun!

Short interviews with the four seiyuu follow the manga along with information about Sengoku Basara 2 Eiyuu Gaiden (Heroes), which had been released a couple of months previously, and the upcoming Sengoku Basara X (Cross). Two pages are dedicated to a very brief summary of the Basara Matsuri 2007 ~Fuyu No Jin~ fan event, then a collection of fan art and letters wraps things up. Official artist Nishizawa Sabroh provides official illustrations to complement the fan contributions.

Sengoku Basara 2 Visual & Sound Book Vol. 3 was published on 15th January 2008 by Media Works and it's still available for purchase from all good Japanese bookstores such as Yesasia and Amazon at the original price of ¥1,800.
at 9:58:00 am