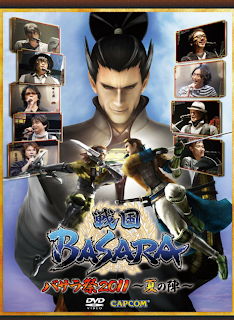 Some time ago I purchased and watched the DVD compilation of footage from Basara Matsuri 2011 ~Natsu No Jin~. Since I wasn't running this blog at the time, I've gone back to create a belated review to summarise what happened at the event so that I can reference it easily in future. The other reason for this sudden bout of Basara-related archaeology is that I'm trying to judge when we can expect an announcement of the next game, if one is coming at all!

The DVD version of Basara Matsuri 2011 was released on 23rd December the same year on a single dual-layer disc, retailing at ¥5,040. It included a colour booklet with some pictures from the event and brief profiles of the guests. There's also a slip of paper inside apologising for a misspelling of Nakamura's name (corrections like this are a surprisingly common occurrence).

It was an exciting time to be following the series: Sengoku Basara 3 had just been rereleased on Wii and PS3 on their respective priced down classics labels, and the movie Sengoku Basara -The Last Party- was receiving good reviews from its cinema run. Two radio shows were on the air on a regular basis. 2011 also marked the revival of the Butai Sengoku Basara stage play project with Butai Sengoku Basara 3 bursting onto the scene. It had been announced back in June and was going to debut in October; fans were naturally curious about which actors would be playing the new leads.

In addition to all of this, the second PSP spin-off game called Sengoku Basara Chronicle Heroes was to be released the week after the event.

The fans had purchased their tickets expecting Chronicle Heroes to be the main focus of this Basara Matsuri. However, on the 5th July - two days before the scheduled publication date - a scan from Famitsu revealed that a brand new game was on the horizon: Sengoku Basara 3 Utage. This news was far more exciting than the announcement of Chronicle Heroes had been; Utage was to be a proper PS3/Wii game rather than a handheld spin-off title.

Consequently, the scheduled Basara Matsuri event would be the perfect opportunity for Capcom to tease more details ahead of Utage's distant November release date. Without further ado, here's a description of how things went.

The guests for the main Basara Matsuri 2011 event were all seiyuu:

Hayami Shou only appeared at the afternoon performance while Nakai Kazuya was only present for the evening. Series producer KobaP (Kobayashi Hiroyuki) was in attendance throughout.

The show was opened with a performance from Sengoku Nabe TV ~Nantonaku Rekishi Ga Manaberu Eizou~, a well-known comical television show which is popular with SenBasa fans even though it technically has nothing to do with it. Unfortunately this segment was removed from the DVD version. It involved the Sengoku Nabe TV versions of Nobunaga and Ranmaru (who are adorable) performing their song Atsumori 2011, followed by two songs from the Azai Sanshimai.

The DVD is laid out quite strangely with the two separate performances interleaved. The segments which only appear in the list once would have been the same for both the afternoon and evening shows.  In addition, Morita Masakazu occasionally appeared in footage shot backstage to provide extra details exclusively for the DVD. I'm going to give general comments on each section of the event in the order they appear on the disc.

Sengoku Drama Emaki: Sengoku Basara Chronicle Heroes
The seiyuu performed classic encounters between rivals from the new PSP game live on stage. This was a mixture of scenes from the afternoon and evening events.

Cast introduction
Opening talk (afternoon)
Opening talk (evening)
Everyone was formally introduced to loud cheering from the audience. These sections were a little confusing because the guest list was a little different between the two shows. The seiyuu were as spirited as ever!

Decisive Battle! Sengoku Basara Chronicle Heroes (afternoon)
Decisive Battle! Sengoku Basara Chronicle Heroes (evening)
The seiyuu had to play the PSP game on stage in teams of two accompanied by commentary from KobaP who also joined in and played too when a slot was free. Fujiwara Keiji (his character, Hisahide, wasn't playable in Chronicle Heroes) presented the winners with a tawara of Japanese rice. Tawara are the traditional containers which appear in the game to represent rewards of experience points, so it was an apt prize. The young girls whose job it was to configure the PSPs from inside a throng of playful guests seemed to be having a wonderful time.

Sengoku Basara 3 Utage: Latest information
This was the part of the event everyone had been waiting for. KobaP went over the information which had already been announced and unveiled the game's first poster and promotional video. With assistance from Morita Masakazu he went on to describe the eight main characters who would be featuring in Utage.

Sengoku Drama Emaki: Sengoku Basara 3 Utage
This was another set of live drama readings from the seiyuu, this time themed around the new game. The first in the DVD compilation was a meeting between Motochika and Keiji at the Kyoto fireworks festival. Next came a performance of the dialogue between Hisahide and Kojuurou as the latter fled from Odawara with an unconscious Masamune in tow. Next, Masamune, Yukimura, Sasuke and Kojuurou performed a scene set at Ueda Castle (the Takeda pair weren't present so their lines had been prerecorded). Yamazaki was the setting for a scene with Tenkai, Ieyasu and Mitsunari and the segment finished at Sekigahara with an encounter between Ieyasu, Mitsunari and Hisahide. The dramas gave an effective taste of the more serious stories we'd be seeing played out in the final game.

KobaP: Latest information
Once the dramas were finished, leaving the audience to absorb all that they'd heard, KobaP came back on stage to introduce the latest waves of merchandise to tie in with the release of Sengoku Basara Chronicle Heroes. This was the debut of Zoff's ridiculous datemegane: glasses themed around the characters. It's a dreadful pun in Japanese as the word means 'fake glasses' and it's used to describe spectacles which are worn for fashion rather than for practical purposes. The date in datemegane is exactly the same as the name of the historical Japanese clan, so there's a dual meaning when glasses are produced for Sengoku Basara's Date Masamune...

Anyway, the SenBasa glasses have since become a very popular tie-in, and this was their humble debut. The first wave of spectacles were themed around Masamune and Yukimura.

The next announcement was that the Pasela chain of karaoke venues would be running a Chronicle Heroes campaign with themed food, drinks and collectible coasters. I don't think the coasters were as successful as they'd hoped since I was still able to get one a year later when I visited one of the karaoke shops with my friends.

Last but not least was the announcement of two fan events to promote Chronicle Heroes. Kumamoto's Greenland leisure resort would be hosting a Sengoku Basara corner for six weeks over the summer involving a talk show for a thousand guests with seiyuu Ookawa Tooru. Finally, the huge JTB travel agency would be running their third historical Sengoku Basara tour. This two-day overnight trip would be based on the Mouri army and include Hiroshima Castle and Itsukushima Shrine. Motonari's seiyuu Nakahara Shigeru would participate in the tour along with KobaP himself.

Sengoku Basara 3 Utage: special talk (afternoon)
Sengoku Basara 3 Utage: special talk (evening)
Sengoku Basara 3 Utage: warlord talk
Ending
Curtain Call
The seiyuu came back on stage and Morita guided them all in a goofy segment where they shared their ideas on various diverse Sengoku Basara topics and played games which necessitated drawing silly pictures. It's amusing to see the insights they have into their characters. Hoshi Souichirou (Sanada Yukimura) appeared in a pair of video messages as he hadn't been able to attend Matsuri in person. After some final discussion, everyone said farewell to the audience and Basara Matsuri 2011 was formally closed with all of the voice actors performing a final line in character.

I mentioned the stage play above yet information about it is conspicuously absent from my description of the Basara Matsuri 2011 coverage. The reason for this is that the stage play details were revealed the day before. Some clips from Basara Matsuri 2011 ~Natsu No Jin~ Zenyasai was included on the DVD as a 46 minute bonus feature. As well as KobaP, three seiyuu guests were present.

The Zenyasai was primarily about the stage play, so of course several of the key Butai Sengoku Basara 3 actors appeared too.

The coverage started off by introducing the four veteran Butai Sengoku Basara actors who sat down with KobaP to rowdily discuss the new stage play. The actors for Butai Sengoku Basara 3 were then announced (amusingly, KobaP also included the four who were present in his list - they reacted to their own names with elation as though there had been doubt they might be participating). There was great excitement from both the crowd and the actors on stage as each new character and actor was named. This was the first time that Hirose and Nakamura had been revealed as newcomers to the series so they were brought on stage right at the end of the talk session.

The next segment was a chat between KobaP and the three seiyuu guests. This was followed by a series of Sengoku Basara Chronicle Heroes team battles with KobaP commentating. The stage play actors trounced the seiyuu. Winners had to perform a line as their character, while as a forfeit the losers had to perform a skit together as Kasuga and Kenshin. After the silliness was over a lengthy farewell from the guests completed the Zenyasai footage.

It was a little strange how the stage play project was kept completely separate from the game news which would follow in the main Matsuri 2011 event the day after. It was probably more convenient for Butai fans who didn't play the original games since they could opt to go to the Zenyasai instead of the full festival; having said that, from what I've seen the vast majority of the hardcore Japanese fanbase seems to enjoy both sides of the series equally.

Gaming websites 4gamer.net, Dengeki, Famitsu and Famitsu's SBCH portal all posted detailed event reports which are full of pictures. Overall Basara Matsuri 2011 ~Natsu No Jin~ was a big success and Sengoku Basara 3 Utage would turn out to be a worthy addition to the series later in the year. I'll be making an extra-long post to cover the 2012 Matsuri event in the next few days!
at 7:51:00 pm