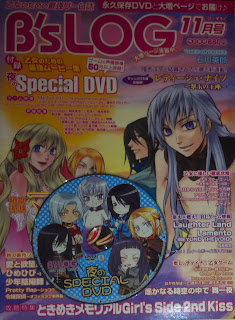 This will be the least detailed of all of my Basara Matsuri posts, as it covers the very first event. Unlike the later Matsuri celebrations, 2006's never had a proper standalone DVD release. Instead, the highlights were included on a compilation disc which came with the November 2006 issue of B's Log magazine, a publication which generally specialises in topics of interest to female gamers such as otome games and BL.

Basara Matsuri 2006 ~Natsu No Jin~ was held back on Saturday 22nd July 2006 in front of an audience of 1,200 people at Odaiba's Zepp Tokyo. I've been to Zepp Tokyo a few times myself and there's not much space so I was impressed to see that they'd somehow crammed a number of dedicated PS2 demo stations into the hallway for the attendees to play on, in addition to the usual merchandise stalls.

The original Sengoku Basara game had been released almost exactly one year earlier, and its sequel would becoming out five days after Basara Matsuri 2006. Back then, the series had earned some devoted popularity but it was still a long way from having taken off as the multimedia juggernaut it would eventually become. The purpose of the event was quite simple: to show the fans what they could expect from the long-awaited Sengoku Basara 2.

The guest list included Nakai Kazuya (Date Masamune), Hoshi Souichirou (Sanada Yukimura), Ishino Ryuuzou (Chousokabe Motochika), Paku Romi (Uesugi Kenshin) and Morita Masakazu (Maeda Keiji). The seiyuu were accompanied by series producer KobaP (Kobayashi Hiroyuki). The event also featured a music performance of Dive into Yourself by HIGH AND MIGHTY COLOR which wasn't included on the DVD. A shame since I am one of the people who thought their song for Sengoku Basara 2 was great, even if it was a departure from T.M.Revolution.

Sadly, the event footage which made it to the DVD only runs for a total of twenty minutes. After a short introduction by KobaP, clips from the event prologue are shown. It took the form of a costumed samurai-style combat display which reminded me a little of the recent stage official plays.

The DVD then went straight into clips from the seiyuu 'talk show' where the cast spoke about their characters and working on the game. The audience was really boisterous; there was far more yelling than I'm used to! Due to the fragmented footage which cut the talk show down to the bare minimum, there was nothing worthy of translating for this blog entry.

Some live voice performances followed reading dramatic scenes from the new game. The weirdest one to watch was Paku Romi as Kenshin; she's a beautiful woman and to hear Kenshin's silky words spoken by her live is a little unsettling - in a good way. Her voice carries a distinct feeling of masculinity even when you can see her standing there on stage in a long skirt. Ishino was immersing himself completely in his performance, mustering just as much enthusiasm for his role as he does now, more than half a decade later. As a treat, there was also a special Matsuri-exclusive dialogue between Masamune, Keiji and Yukimura.

And that was that! All that remains of Basara Matsuri 2006 ~Natsu No Jin~ was all over far too quickly. KobaP finished with an exclusive message of hope and gratitude for the readers of B's Log, and I was left wondering how much of the footage ended up being removed when this compilation was put together.

Although it was disappointing that so little of the event was shown, I can see why this was never sold as a standalone disc. The video quality is blurry (it's hard to make out the seiyuu at all when they're not being shown close up) and the sound isn't great, either. The difference between the Basara Matsuri 2006 footage and that from later events is very noticeable. It's a shame though; all of the clips are cut so abruptly to move straight into the next that so any lighthearted fooling around between the guests has been purged from the recording entirely. 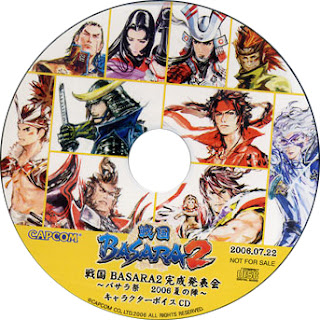 Since my comments on the event itself are so short, I'll mention something else. One extra incentive to attend the original event was that visitors were able to pick up a unique audio disc, the Sengoku Basara 2 Kansei Happyoukai ~Basara Matsuri 2006 Natsu No Jin~ Character Voice CD. This is quite rare these days as it was never made available elsewhere, and attendees who have moved away from the series can neatly cover their original ticket costs by selling it on the used market.

The CD contains twenty tracks, half of which are very short musical interludes to separate the others. The remaining ten tracks collect dialogue from the game. Each contains a few minutes of standalone quotes from the characters on the front of the CD (pictured). Since there are no background sound effects (or music) played alongside the voice track, if nothing else it's probably a good way to make some exciting personalised ring tones.

For the sake of being thorough - in case some gaming magazine fan stumbles across this post one day and wants to know - the November 2006 B's Log DVD also includes some material which is completely unrelated to Sengoku Basara. There's a promotional video for the anime adaptation of Kin Iro No Corda (La Corda d'Oro), long video interviews for seiyuu Ishikawa Hideo and Takahashi Hiroki, an interview with Suzuki Masaru, Miyake Junichi and Nemoto Kouta of seiyuu unit Boy's Beat, and a Boy's Beat clip to promote Summer Beat ~Love & Smile~. Alongside the event footage I've reviewed above, other games are advertised with videos clips including Lamento -Beyond The Void-, Laughter Land, Ayakashibito -Genyouibunroku-, Mermaid Prism, Yo-Jin-Bo ~Unmei No Freude~, Under the Moon, Palais de Reine, and Arabians Lost ~The engagement on desert~. There's no other Sengoku Basara content besides the stingy Matsuri compilation.

In the absence of a proper event DVD, I've drawn heavily on event reports from gaming websites such as Famitsu and Gpara in order to pull all of the details together. I'm glad that the Sengoku Basara series has become so big since the summer of 2006; it makes enjoying things properly from afar much easier!
at 7:38:00 pm