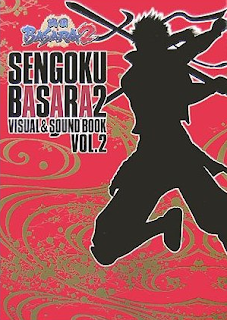 The book I'm reviewing today is the second based on Sengoku Basara 2. There were three in total for that game, one for Sengoku Basara 3 and a similar but separate volume called the Sengoku Basara Dengeki Visual & Sound Book. I'm starting with Sengoku Basara 2 Vol. 2 for no reason other than that it's the one I received most recently. Each volume stands alone.

Volume two starts off with 'Gravure of Heroes', a series of character profiles for Chousokabe Motochika, Sanada Yukimura, Sarutobi Sasuke, Maeda Keiji, Azai Nagamasa and Oichi. These are accompanied by gorgeous full-page colour illustrations by a number of regular Sengoku Basara series fan artists: Haibara Yak, Yumeji Kiriko, Shishizaru, Wolfina, Shimotsuki Kairi, Nagasawa Shin, Yoshizumi Kazuyuki, Kazuaki, Hirooka Masaki, Tsunako, Sasakura Kou, Kugawara Kadzuki, Yamamoto Kana, Tobashi Kotomi, Hitaki, Enomoto and Kazama Raita all feature. Several of these artists have gone on to win wider recognition for their talent in the years since the book was produced, making these SenBasa illustrations even more exciting. There's an interesting variety to the art styles on display (especially for the pictures of Oichi) and I don't think I'd ever seen Nagamasa drawn by Sasakura before. The quality is superb.

The next part of the book is a short story based on Sengoku Basara 2: Cool & The Gang, the very first Sengoku Basara novel written by Asou Ryou. The novel (sold separately) was illustrated by Tsuchibayashi Makoto while the 'special edition' arc in this book comes with a generous number of pictures by Tobashi Kotomi instead. Cool & The Gang involves Masamune teaming up with Motochika. As both characters are not only extremely popular but also in possession of similar character traits, the storyline was well received.

This is where the CD comes in, allowing you to immerse yourself in the story with the dulcet tones of the familiar Sengoku Basara seiyuu. The actors featured on the CD in this volume are Nakai Kazuya (Date Masamune), Ishino Ryuuzou (Chousokabe Motochika), Morita Masakazu (Maeda Keiji), Okiayu Ryoutarou (Toyotomi Hideyoshi) and Ishida Akira (Takenaka Hanbee). The dialogue is loaded with cocky lines to allow Masamune and Motochika an opportunity to play off one another beautifully.

The next part of the book is a set of short interviews with the seiyuu who featured on the audio CD. One thing which could have made the bundle feel more worthwhile would have been some out of character discussion by the seiyuu about either the story they performed or to expand on these too-brief interviews. There was plenty of space on the CD.

Sengoku Basara 2 Visual & Sound Book Vol. 2 was published on 10th October 2007 by ASCII Media Works and it still seems to be in print (my book is from the third printing in 2009). It can be purchased from all good Japanese bookstores at its original price of ¥1,800, including Yesasia and Amazon. There shouldn't be any customs fees importing it to the UK, so anyone curious should give the series a try.

I'll post the details of the other Visual & Sound Books I possess whenever I have the time to slot them into my schedule!
at 3:16:00 am