News roundup: More about the Monster Hunter costumes and returning characters in the newest Weekly Famitsu

It's that time again! The 2nd July 2015 issue of Weekly Famitsu is now on sale in Japan which means that we have the latest official Sengoku Basara 4 Sumeragi news update. The topics are numbered as usual.

33. The updated Shingen, Toshiie and Matsu tear through the battlefield!

The three remaining returning characters are reintroduced with their profiles from Sengoku Basara 4 and the first details of their brand new R2 specials.

Takeda Shingen
Maeda Toshiie
Matsu
Toshiie is wearing a summery recoloured blue outfit with what looks like a floral pattern instead of his usual fur, and Matsu is dressed in a similar pink costume.

When you destroy a Roulette Camp, one of the rewards you can get from the roulette wheel landing on 'Tenka' (red) is that Medal Soldiers with stacks of Tenka Medals on their backs will spawn on the map. Predictably, killing these soldiers rewards you with a large number of medals. They will vanish 30 seconds after they first appear.

35. Another batch of Tenka Medal rewards is revealed

There's another batch of reward descriptions, as usual. Some have already been shown at events.
All of the costumes had technically been shown before this time, so I guess it's not as exciting as usual. I'm surprised that Kojuurou got another one, though it means that the Takeda Dojo story costumes now make a complete set. Hideyoshi is wearing a golden/purple outfit in the screenshot showing his move enhancement.

These were all revealed yesterday but we now have more pictures, official names and very short descriptions.
(Raindrops' note: I don't know anything about Monster Hunter and it's confusing that everything has different names in the English and Japanese versions, so all corrections are gratefully accepted!)

The PS3 version of Sengoku Basara 4 Sumeragi has slipped slightly to 23rd place in the magazine's list of upcoming games while the PS4 version is back in 35th place.

The game's official website will probably update in a few hours to confirm all of this information and share high quality versions of the pictures.

I didn't expect to have much more news to post today after catching up yesterday. I was wrong.

Remember Bokesuke, the live action parody version of Sen No Rikyuu's 'third personality' who debuted at the Nico Nico Choukaigi 2015 event? It seems that Capcom have more plans to use him in a series of six videos called Sengoku Basara 4 Sumeragi Bokesuke Special Video: Matsuo of Chocolate Planet's 'Do You Know This, Bokesuke?'. The clips will be released on the official website every Thursday until 23rd July 2015, and three of them will be previewed one day early on Capcom TV on the weeks that the show airs. 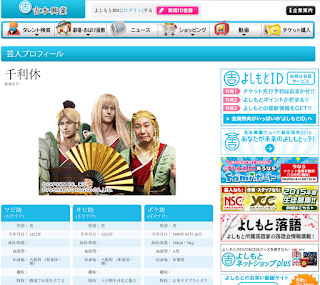 The first video aired during today's episode of Capcom TV (episode 23) and it was about a novelty ballpoint pen which delivered a small electric shock to the user. The topics for the remaining shows will be gomu pacchin (a rubber-stretching game), headphones, foot massage, Brazilian waxing and death sauce. I doubt these clips will be very interesting to most fans who don't follow Japanese comedy, but please take this as advance warning that the website will update with these goofy videos each week.

A new batch of Sengoku Basara 4 Sumeragi merchandise is announced

The CafeReo website added two new lines of merchandise yesterday, both of which merge the anime and game designs. The first is the Sengoku Basara 4 Sumeragi Mini Shikishi Collection, a set of twelve collectible illustrations. They'll be priced at ¥450 each or ¥5,400 for a box of twelve when they go on sale in late August 2015. 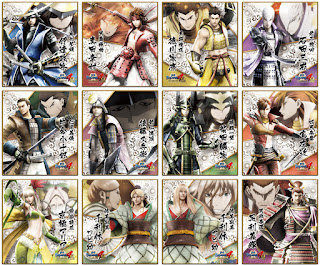 A rare glimpse of anime-style Matabee!

There's also a set of ten different charms in the Sengoku Basara 4 Sumeragi Bushou Metal Strap Collection. The straps are priced at ¥500 each or ¥5,000 for a box of ten. They'll be available in late September 2015. 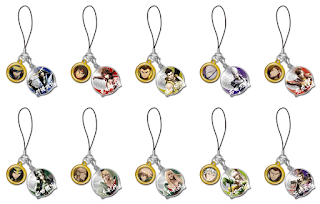 Rather cruelly, matching Kojuurou and Matabee options for the straps don't seem to exist.

The Amazon Japan listing for Sengoku Basara Magazine issue 9 (due out at the end of this month) has been updated, giving us a clearer look at some of the content which hasn't yet been announced thanks to their new placeholder image for the magazine's cover. 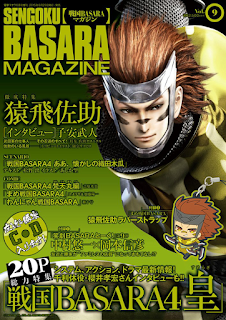 It's possible that the cover illustration will be changed as usual. If it is, I wonder whether we'll see anime-style Sasuke this time or a new CG render? There's also an updated preview shot of the rubber strap and a promise that the Sasuke coverage will span 18 pages. 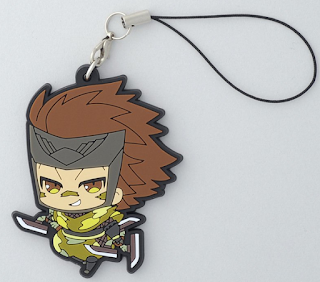 It seems that the two-part 'scenario novel' from the previous issues was a success as there's a new one starting in this issue titled Sengoku Basara 4: Aa, Natsukashii No Oda Mokkou ('Ah, The Good Old Oda Mokkou'). The mokkou (Japanese quince) is the flower famously used on the Oda clan's family crest and Mitsuhide will be the main character this time. The mini-novel will (finally) tell the story of what happened with the Oda army behind the scenes during Sengoku Basara 4, naming Nobunaga, Nouhime, Ranmaru and Katsuie in the list of characters. The game's scenario writer Matsuno Izuru is returning to write the story with Ashika Nozomu providing the illustrations. Ashika has worked on several short Sengoku Basara manga in the past so it sounds as though this will be something to look forward to.

In addition, there will be an interview with Sasuke's voice actor Koyasu Takehito and the tribute illustration will be drawn by Mikami Ritsuhiro. It's described as depicting a close-up scene with Sasuke battling Kojuurou. The 'Basara Challenge' skit on the bonus CD has Sakon and Katsuie working at a family restaurant and trying to treat the customers with the appropriate hospitality.

Oh, and there will be a full 20-page feature all about Sengoku Basara 4 Sumeragi including an interview with Sakurai Takahiro (Sen No Rikyuu). Most of those pages will probably be spent covering the information we already know, but there's a promise of comments from KobaP and YamamotoD so there should be some interesting tidbits to hunt for there too.
at 5:57:00 pm