As expected, all the magazines have today is a summary of last week's news in Dengeki PlayStation with some short comments from YamamotoD.
Sengoku Basara 4 Sumeragi has shot up to 7th place in Dengeki PlayStation's ranking of upcoming games, with 39.1% of its votes being for the PS3 version and 60.9% for the PS4. That's a pretty good ranking, especially since it's (temporarily) overtaken Final Fantasy XV and some other big-name RPGs. The game doesn't fare quite so well in Weekly Famitsu, where it's now ranked in 21st place for the PS3 version and in 33rd place for the PS4.

Sengoku Basara's Tokugawa Ieyasu is participating in another real-life collaboration in the Okazaki area, this time with the Great Ieyasu-kou 'Aoi' Bushoutai, a troupe of people who dress up as historical figures and try to encourage interest in visiting famous sites. I was lucky enough to see several members of the group when I visited Okazaki Castle; they're often wandering its grounds to meet tourists and chat about the area's history. If you time a visit well enough, you can even catch them participating in a mock battle or performing live music.

Okazaki is famous for being the birthplace of the real Tokugawa Ieyasu, so the Sengoku Basara version been selected to appear on some promotional posters designed to encourage people to visit. He's accompanied by Tadakatsu and the Great Ieyasu-kou 'Aoi' Bushoutai version of Ieyasu. The campaign begins in July! 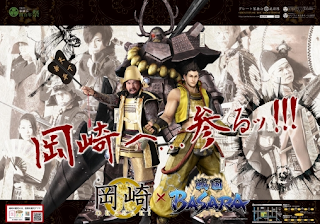 There should be a lot of news next week, with another Weekly Famitsu feature likely and the official magazine being released, not to mention another new video on Friday morning.
at 7:50:00 pm