This week is a Dengeki PlayStation week which means a recap of last week's announcements in Dengeki PlayStation issue 592, and nothing much more. Series director YamamotoD provided some brief comments about Kenshin and Kasuga returning for Sengoku Basara 4 Sumeragi:

Kenshin was affiliated with the Ashikaga faction historically, and he's rushing around for the sake of the chaotic world Yoshiteru created. Since his story is based on tales from actual history, as you wait please go ahead and imagine the 'dramatic' demise of Kenshin's dealings with Yoshiteru, and how things will be settled with rival Takeda Shingen.

Kasuga is tremendous this time around! Her usual 'heart full of Kenshin-sama' is overflowing. And if your timing is good enough and you're able to keep it going, it reaches a crescendo at the end of her pole dance technique! While Kasuga is performing that move, the soldiers surrounding her cheer and applaud, so please do your best to concentrate.

(Raindrops' note: I guess there's a big flowery finish at the end of the move if you press the buttons correctly?)

The big news from Dengeki PlayStation is that will be a gameplay event on 4th July 2015 for 100 lucky fans in Japan, where they'll get to try out Sengoku Basara 4 Sumeragi before its release and be treated to a presentation from series producer KobaP. There will also be a SCE x Dengeki PlayStation presentation on the subject of this year's E3 trade show. It's free to attend and applications will be accepted until noon on 22nd June 2015. If you'll be in the Tokyo area at the time, check this article for further details and application instructions.

The game is now sitting in 10th place in the magazine's ranking of upcoming games with a 34.8%/65.2% split in favour of the PS3 edition.

The 25th June 2015 issue of Weekly Famitsu magazine was also released today so I checked that out too. The PS3 version of Sengoku Basara 4 Sumeragi has crept up one spot to 21st place in the list of upcoming games while the PS4 edition has sprung back into 26th place this week. There was nothing else of interest in the entire magazine; we'll probably have to wait until next Wednesday/Thursday for the next batch of information. I'm guessing that the final tie-in costumes will be announced on the Famitsu website in advance since Monster Hunter is such a popular series.

It's been announced that the first Sengoku Basara anime will be broadcast on television once again as part of the late night MBS Anime Shower block from 11th July 2015, to celebrate the series' tenth anniversary. The broadcaster plans to show the first twelve episodes (i.e. the whole first season). Let's hope that people check it out; television broadcasts often seem to increase interest in a series and it's been quite a long time now since Sengoku Basara originally aired.

Preorder the upcoming drama CD at Dengekiya for some extra goodies

I last mentioned the Sengoku Basara 4: Sanbee Souran ~Oushuu Ni Teru Hikari~ Kouhen ('Three '-bee' Mayhem ~The Future Which Shines On Oushuu~') drama CD back when it was announced in the last issue of Sengoku Basara Magazine, but a listing has since appeared on the Dengekiya website with details of a special preorder bonus. Customers who place their orders on the site by 6th July 2015 will earn a set of three interchangeable cards to customise their CD jacket. One of the three illustrations will be drawn by Yokota Mamoru, who also illustrated the original scenario novel upon which the story is based.

In addition, the CD will include a brand new BASARA Challenge skit with all five of the characters who appear in the main story! The theme for the skit will be 'Riddles'.

The story is credited to the game series' scenario writer Matsuno Izuru.

The CD will be released on 27th August 2015 and costs ¥3,240 including tax. A preliminary sample of Yokota's cover artwork is also available on the listing. 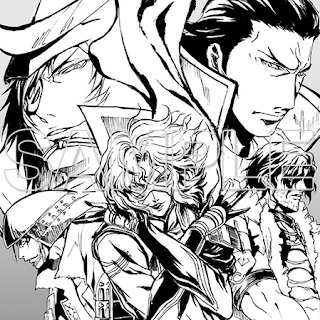