The usual spoiler-filled preview of the next issue of Weekly Famitsu was posted on the official website today and it's another generous reveal, with pictures of Rikyuu as Ken, Maria as Rose, Ieyasu as Ryu and Kasuga as Chun-Li in Sengoku Basara 4 Sumeragi. The article's main feature will be about the return of Kenshin and Kasuga as playable characters and their movesets. In addition, there will be more Tenka Medal updates.

Full details will be included in the magazine, which goes on sale on Thursday (Japan time). I'll update with a summary of the article on Wednesday night.

Sabisuke looks the part as Ken, but I'm curious how Wabisuke is going to look dressed in that kind of outfit...

Sengoku Basara 4 Sumeragi will be featured at two upcoming events

I guess promoting Sengoku Basara at the regular Jump Festa events has been successful as it's now been announced that Sengoku Basara 4 Sumeragi will be featured at the Jump Victory Carnival 2015 event on 18th July 2015 (Tokyo) and 25th July 2015 (Osaka). The game will be exhibited together with Monster Hunter Spirits and Dai Gyakuten Saiban. Visitors are being promised the chance to try a demo of the game at the Capcom stand.

Speaking of events, it's also been confirmed that Capcom will be running prerelease demo events at the HAL vocational colleges (they did the same thing in the run-up to Sengoku Basara 4's release). The 'open campus' events for prospective students will take place on 21st June 2015 (HAL Osaka) and 27th June 2015 (HAL Tokyo). As well as the chance to try the game out before release day, attendees will be able to experience a lecture from Sengoku Basara series director Yamamoto Makoto!

Amazon Japan is now offering the book of questions which was promised when the official Sengoku Basara exam was announced back in April. Scheduled for release on 25th June 2015, the Sengoku Basara Kentei: Koushiki Mondaishuu ('The Sengoku Basara Qualification: Official Exam Questions') will cost ¥1,080.

According to the book's description, it will include a total of 300 questions on topics such as famous scenes, dialogue and characters and cover all of the titles in the series, from the first Sengoku Basara through to Sengoku Basara 4 Sumeragi. It can be used to help study for the official test or simply as a fun way to increase your general knowledge, whether you're a newcomer to the series or a dedicated fan already. There will also be plenty of full-colour pictures of the characters.

Merchandise based on the Judge End anime continues to appear

Ami Ami is listing another new Sengoku Basara Judge End item in the form of this sticker folder. It's priced at ¥1,080 and due for release in late July 2015. 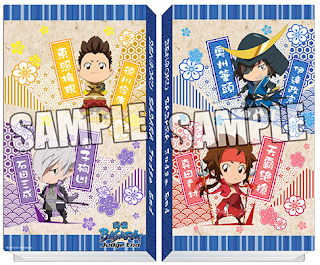