News roundup: A few miscellaneous updates, all of which somehow involve Sasuke

This weekend marked the opening of the Osaka: Mysterious Rebellion ~Escape From Namba's Hidden Castle Town~ (Side Story) event in the Namba Walk complex, so Capcom posted an update with details of the 'top secret mission' that visitors can sign up to help with. 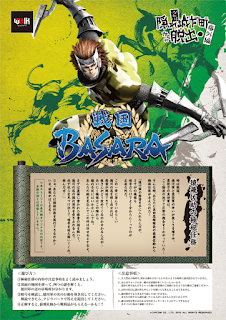 The update also showed off the set of three exclusive postcards which are being given out to visitors who manage to successfully clear the mission. The strange dog is the shopping centre's Namba Wan (a deliberate pun on 'Number One') mascot character.

It seems as though the first day was a success as several fans I follow on Twitter were tweeting pictures from the area showing the mini gallery (with seiyuu signature boards) and Sengoku Basara booth. The whole thing reminds me of the room escape puzzle challenge from a few months ago; I hope they can keep running fun events like this to encourage fans of all ages to learn about history and the Sengoku Basara games.

Sample artwork for the next Sengoku Basara Magazine rubber strap

There still hasn't been much information posted about the next issue of Sengoku Basara Magazine due out at the end of this month. However, a preview picture was published a while ago showing artist Sumeragi's illustration which will be used for the rubber strap; it looks as cute as expected. 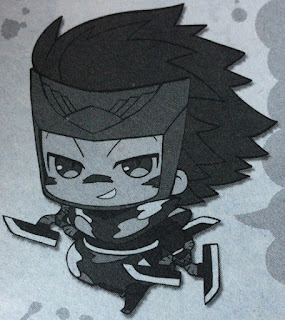 Here are the most recent BASARA Sengoku HERO columns from Sengoku Basara series director YamamotoD, which discuss how the characters were originally created and the historical references they incorporate. There are still ten more of these columns I have yet to track down, since it took me a while to realise they were running bonus 'excursion' chapters in Dengeki Maoh as well as the normal ones from Sengoku Basara Magazine.

The very latest column coincides with the upcoming issue of Sengoku Basara Magazine where Sarutobi Sasuke is headlining most of the coverage. Since there's not so much real-world history associated with Sasuke, there were a few hints about the upcoming game woven into the article too.

I also got hold of the previous issue which talked about Takeda Shingen.
at 11:39:00 am