There was a major announcement this morning to reveal a special edition PlayStation 4 console with a laser-etched Sengoku Basara hard drive bay cover. The console will be available in jet black and glacier white variants.

It will be released alongside Sengoku Basara 4 Sumeragi on 23rd July 2015, to coincide with the series' tenth anniversary. The 23rd is the closest release date to the actual anniversary on 21st July 2015.

The special PlayStation 4 will also come with a matching custom theme. 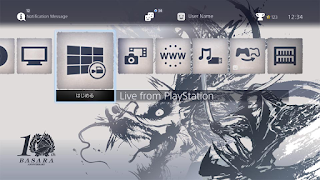 The set will cost ¥41,980 before tax when purchased through the Japanese Sony store, the exclusive distributor. Reservations open today. It will be made to order, so the delivery date may vary depending on when you place your order with Sony.

Oh no! My friends convinced me I was crazy for believing that something like this might happen, so I bought a PS4 the last time I visited Japan. At least this means I don't have to make the difficult choice between the two designs since I already have my own custom Masamune PS4 covered in stickers...

I really like the way they've combined the classic Tsuchibayashi Makoto artwork with the dragon painting from Sengoku Basara 4. An appropriate anniversary design.
at 10:09:00 am