News roundup: Mouri Motonari will be included in Sengoku Basara 4, and a new video is released

Mouri Motonari is to join the Sengoku Basara 4 roster

Finally! It hasn't even been released yet but the cover artwork for Sengoku Basara Magazine Vol. 3 posted on Amazon Japan received a stealth update today. They changed the line about the number of characters announced since the previous issue's feature: 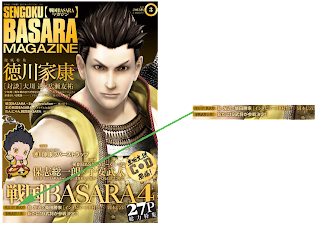 "Nineteen new commanders have been selected to join the battle!!" was secretly changed to:

"Beginning with Mouri Motonari, nineteen new commanders have been selected to join the battle!!"

We can expect a character profile for Motonari on the 27th November when people receive their copies of the magazine. I don't expect to receive mine until next week so a full translation of any of the new content will have to wait for a while. I'll try to post and tweet any rumours in the meantime.

It seems likely that there will be a formal reveal for Motonari in next week's Weekly Famitsu magazine as well for the benefit of regular gamers who don't collect Sengoku Basara Magazine. If it follows the same pattern as Yukimura's surprise announcement a few months ago, the formal reveal will also include characters with links to Motonari. Is it finally time for the Xavists..?!

(My thanks go to G in the comments section, whose message about this cheered me up when I was stuck at work without proper Internet access this morning!)

The new video which debuted at Fukuoka on Saturday has now been shared on the Capcom Channel. You can watch it on YouTube or below as usual.


Of course, a new video requires some new speculation. Here's what I noticed on my first few viewings.
I've added the new stages and Play Books to my ongoing lists (please see below for more details).

Since finding the individual posts will be difficult in future, I've rounded up all of the game information I've been posting so far into a summary for players who are worried about the language barrier if they import the Japanese edition of Sengoku Basara 4. I'll try to keep this summary post up to date each time I spot something new.

You can find the compiled information in the post just before this one, or through the Articles menu at the top of this page.

Of course, if Capcom later announce an English language translation themselves, this will have been a waste of time. Nobody will be happier than I am if that turns out to be the case!
at 11:37:00 pm