I was very surprised to receive an email from the Sengoku Basara Official Fan Club ~Eiyuu No Kai~ last week which advised that the club is shutting down. I had been expecting a renewal message at some point since it was about the right time for one, so this came out of the blue!

It seems like a good opportunity for a short retrospective on the fan club and its first (and now, sadly, only) year of activity. It was obvious that there were plans to continue the club for a long time at the start since they'd listed the annual renewal fees as far back as when I first signed up. There were apparently some internal issues with running the club effectively, but I can only speculate that the relaunch of Capcom's electronic newsletter coupled with Sengoku Basara Magazine meant that it would have been increasingly difficult to spread exclusive content between all of the different portals vying for information. It's fortunate that they held back the decision on closing the club until after Sengoku Basara 4 had been announced - if the email had come a few months earlier, many fans would have assumed that the series was finished for good.

So what did the club actually do?

Eiyuu No Kai (fondly nicknamed Hideo No Kai by its members) was originally launched in April 2012. It's very first activity was giving the first wave of members access to preferential tickets for Basara Matsuri 2012 ~Natsu No Jin~ event. This was no doubt frustrating to members who didn't sign up immediately, as the club would only accept new applicants during designated recruitment periods. The second of these didn't start for some time after the first ended relatively quickly. There would never be a third.

Incentives for joining Eiyuu No Kai included a personalised membership card, birthday card, a nengajou (New Year greeting card), a cloth wallet and clear plastic Mame Sengoku Basara files. There was also a newsletter which came out three times over the course of the year (a fourth volume is yet to be released). The cards were mailed individually to each member at the appropriate times, and they came in a variety of designs which you had to pick when you signed up. I chose the Date Masamune versions (the selection of characters was quite limited).

Early access to event tickets was where the club was most active, with ticket lotteries every time a stage play or event came up. There was a single members-only event: a 'fan meeting' where a group of lucky fans were invited to dine with series producer KobaP and Yoshida Tomokazu (the actor who plays Katakura Kojuurou in the Butai Sengoku Basara stage play).

Members were also given access to the special fan club website. Video greetings from the series' seiyuu and picture reports made up most of the content. Sections for downloading official wallpapers and artwork from the games were regularly updated and a fan contribution corner rounded off the main website attractions. Please note that I'm not going to share any of the content from the website or fan newsletters unless Capcom makes it public themselves. I can confirm that none of it related to upcoming games.

Of course, the Sengoku Basara series is all about making money, and here are some of the items that Basaraya, the official fan club shop, stocked for members. They were all labelled as "Vol. 1" because they commemorated the first issue of the newsletter; presumably new versions with different characters had been planned for the future. The fan club shop was also the only place to buy unique items such as the Mame Katakura Kojuurou blanket and Sengoku Basara Fan Kanshasai ~BSR48 Kaihyou No Utage~ DVD which I've covered before on this blog. The thing I appreciated most about the Basaraya store design was that it accepted foreign credit cards - unlike Capcom's official shop! 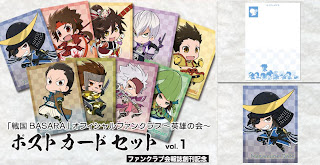 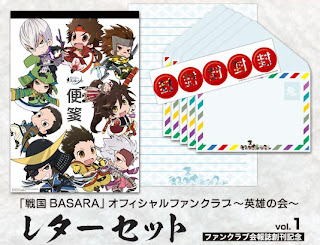 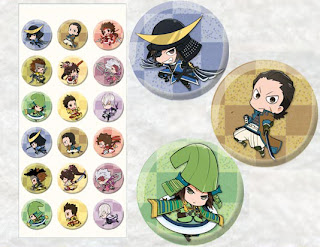 Ultimately, it was very difficult to participate in the Eiyuu No Kai fan club from overseas; I didn't accomplish as much in my year of membership as a fan in Japan would have done. Yet I can honestly say that I felt the hardships of foreign membership were worthwhile. It was the reason that I was able to have such wonderful seats at the Basara Matsuri 2012 ~Natsu No Jin~ event (and seats at all at the sold out Basara Matsuri 2013 ~Haru No Jin~). The staff who kept the club running have my gratitude.
at 3:55:00 pm