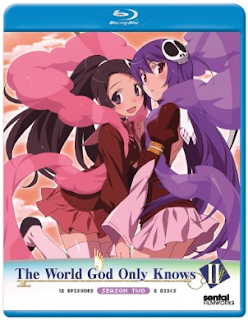 It's been a while since I watched the first series of The World God Only Knows. Based on a Shounen Sunday manga by Wakaki Tamiki, the series follows the conquests of an unpopular schoolboy who is forced into capturing the hearts of girls using the knowledge he's gained from his favourite games. It's effectively a 'monster of the week' harem series with a huge dose of self-aware parody.

The first series was something I enjoyed more than I'd expected, so I went into this 2011 sequel hoping for more of the same. I wasn't disappointed; these twelve new episodes are just as charming and fun to watch as the earlier ones were.

Season two was released by Sentai Filmworks on Blu-ray and DVD on 7th August 2012. I was pleased that the Blu-ray video was presented in 1080p this time as Sentai have a mixed track record when it comes to transfer quality. The sets come with a choice of an English language dub or the original Japanese audio with English subtitles. I didn't watch the dub; everything in this review relates to the Japanese soundtrack. Extras are limited to textless opening/ending sequences.

Since I never reviewed it separately, I should add that the first series is also available from Sentai as a Blu-ray or DVD complete collection. According to this forum post, there's an audio glitch on the first season Blu-ray set. I haven't noticed any problems with the second season set (if anything, it's above average for a Sentai Filmworks release).

When it comes to the content of the discs, what you get with The World God Only Knows is exactly what you'd expect from the simple summary above. The plot's formula is unashamedly politically incorrect without crossing the line and becoming offensive. There are some serious undertones here and there yet nothing bad ever really happens to anyone - even the characters who lie or pick on the main character, Keima, tend to get away with bruised feelings at worst.

Most episodes are grouped into short arcs focusing on Keima's conquest of a particular girl, though there are also a couple of standalone stories which a tiny insight into Keima and his hobbies for a change of pace. Despite playing off what is a very niche gaming genre in the west, I feel that the jokes still work even for people who don't pick up on the references. Having some knowledge of Japanese dating sims and the gaming subculture simply makes everything funnier.

Amidst the fantasy storyline and gags, there's a strange undercurrent which is almost inspirational. Most harem shows are designed to make the insecure viewer feel they have a chance with attractive women. In the World God Only Knows, that's replaced by a strategic look at how an unpopular guy can improve his chances and find success with almost anyone with some hard work and empathy. Perhaps I'm reading too much into things? 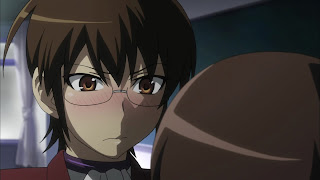 The single biggest strength of The World God Only Knows is probably that Keima himself is unusually likeable; it's a harem series with a main character who is interesting enough in his own right to carry the story through all kinds of twists and turns. Even when he's pursuing a girl I'm not all that keen on, Keima's mildly sociopathic (yet ultimately kind-hearted) personality makes the show addictive viewing. The scenes where he captures the heart of each girl only work because there's an underlying plausibility about his appeal, once his nerdy side is stripped away.

The comedy works too; although Keima is clearly well-qualified to be called the 'god' of conquering girls (both in his games and now in reality too), he's also an easy target for ridicule - which makes his bickering with Elsie and her unintentionally sarcastic-sounding praise even funnier. 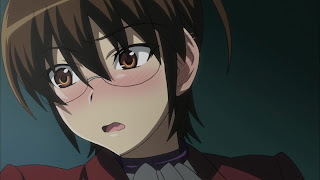 Of course, a series about seducing girls is no good if the girls aren't cute as well, and for the most part they're adorable. The character designs are slick and attractive. To allow the main characters to make as many gaming references and jokes as possible, all of the girls conform to established dating sim stereotypes in various ways - which should make them come across as shallow, except it's so funny and well scripted that it works. Each 'conquest' is over within a few episodes so there's no chance of boredom.

In case the human girls aren't enough (and to allow for a more supernatural twist to the ongoing storyline), this second series introduces a second demon girl character, Haqua, whose more serious personality makes Elsie seem more dithery and sweet than ever. 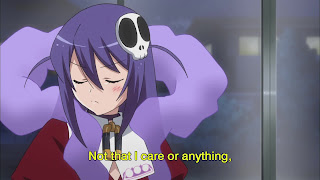 The main reason that I watched The World God Only Knows II now was to prepare myself for the upcoming new television series titled The World God Only Knows Megami-hen. It's due to begin this summer. I'm hoping that Crunchyroll will manage to pick up the streaming rights for this charming show, otherwise I'll have to wait for Sentai Filmworks to get the third series out on Blu-ray before watching more! Until then, if you want to have a permanent copy of the earlier seasons which Crunchyroll is already showing then these sets come highly recommended.
at 9:12:00 pm