There hasn't been much solid news for a while since Capcom doesn't want to divert attention away from the Butai Sengoku Basara 3 Utage stage play which is currently running. For those of us who aren't able to watch it, these tiny news updates will have to do.

Once again, there'll be a special 'after talk' event for a few lucky attendees who go to see the new stage play. This time, the session will be in Tokyo on 14th May 2013. The guests will be the same as before: Kubota Yuuki (Date Masamune), Hosogai Kei (Sanada Yukimura) and Nishida Daisuke (stage play organiser).

In other news, the Sengoku Basara tie-in with Tsuchiura City Museum ended on 6th May 2013, attracting 28,057 new museum visitors in less than two months. I think it's safe to say that it was a big success for the local tourism industry in Tsuchiura - the event had four times as many visitors as the previous record-holding exhibition. Hopefully they'll consider arranging more Sengoku Basara attractions in future!

Some promotional videos have also appeared on YouTube showing the three main characters (Yukimura, Kenshin and Inori) from the Takarazuka Revue performance of the new Sengoku Basara -Sanada Yukimura-hen- musical. I'm not going to link to them as they're not authorised videos and they'll be taken down at some point (breaking any links), but they can be found without much effort with a search in Japanese. The footage isn't quite the same as the video I saw at Basara Matsuri 2013, but the main song is: I love that they're working from the game music rather than making up a completely new soundtrack!

Finally, there's more merchandise coming out: these items debuted at an event last week and they're now receiving a limited release for other customers who want to buy them. Everything has a cute Mame Sengoku Basara theme with illustrations by Sumeragi.

First up are collectable Mame Sengoku Basara button badges. They'll be released in capsule machines for ¥200 each. There are eight in the set; the final badge design is a secret (though I have my suspicions based on the other illustrations being used for this set of merchandise). 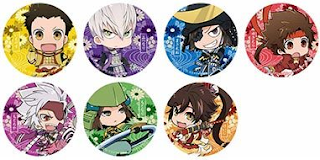 Next come reusable decorative jackets costing ¥525 each. They're for brightening up IC cards (or anything else that's the right size). 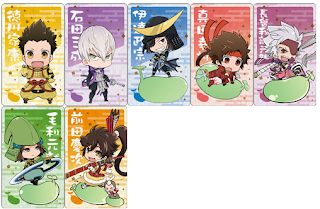 Three different ceramic Mame Sengoku Basara mugs will also be available. Each mug is priced at ¥1,575. 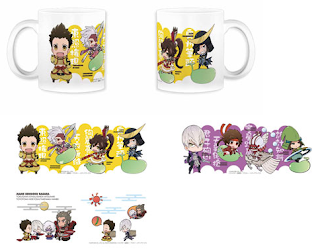 Last but not least are clear Mame Sengoku Basara bookmarks, available in two different designs for ¥525 each. I believe that each set comes as a sheet with four bookmarks; you pop them out of the sheet in order to use them. 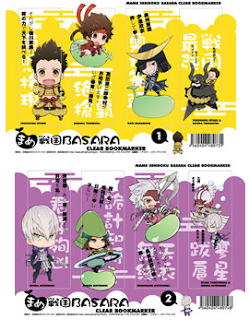