The Sengoku Basara Fan Kanshasai ~BSR48 Kaihyou No Utage~ DVD was finally released for fan club members on 20th December 2012 at ¥3,900. It's still on sale at the Basara-ya now so the next wave of members should be able to pick it up when they join.

Sengoku Basara Fan Kanshasai ~BSR48 Kaihyou No Utage~ was a special 'fan appreciation' event held at Tokyo Mielparque Hall on Saturday 26th January 2012. There were two separate ceremonies held on the same day to accommodate the crowds; one in the afternoon and the other in the evening.

The purpose of the event was to reveal the results of the BSR48 election, a comedic campaign that Capcom ran alongside the release of Sengoku Basara 3 Utage. Buyers of the game were allowed to vote for their favourite warlord, with the winning character receiving three rewards: a starring role in a new drama CD, an internet commercial, and a special 'image video'. The drama CD would also include the characters ranked in second through to seventh place, and there'd be one wildcard participant drawn at random from the characters who ranked either 10th, 20th, 30th or 40th. 45,541 votes were tallied in total and in the end few were surprised to find that Date Masamune won by a comfortable margin. He was joined on the drama CD by Mitsunari, Yukimura, Kojuurou, Sasuke, Motonari, Motochika and Nobunaga. I've listed the full results right at the end of this post for posterity.

Although this event was to celebrate the BSR48 voting campaign, Capcom didn't manage to get the actors for all 48 characters to attend (that would have been something to see, and a few of the seiyuu would have had to clone themselves!). Nevertheless, the selection of guests they put together was impressive.

The countdown was presented by Watanabe Hideo, narrator for the Sengoku Basara series, and naturally producer KobaP (Kobayashi Hiroyuki) was also in attendance in a very smart suit.

The DVD recording of the event runs for 100 minutes with an additional 44 minutes devoted to bonus material. After kicking off with a tremendously exciting video introducing the Sengoku Basara characters, KobaP and Watanabe ran through the results of the voting in reverse order, taking the time to make observations regularly. It was interesting hearing the audience reaction to each name as it was read out; far more so than simply looking at a list of results without appreciating the strangeness of 330 people having voluntarily selected Naoe Kanetsugu with their voting slip or Mori Ranmaru's popularity being close to that of Amago Haruhisa. The countdown stopped with the top ten still unrevealed.

KobaP then kept the audience in suspense by leading a 'talk corner' with the Butai Sengoku Basara actors. The six main actors came on stage for an informal chat about their roles; Hirose's hair was dyed blonde and he had a thin moustache, so for once he didn't look anything like Ieyasu at all...

At the end of the chat, KobaP made a surprise announcement that there was going to be a new stage play, Butai Sengoku Basara 2. The crowd went crazy, screaming loudly as he went on to reveal the three new main characters (Keiji, Hanbee and Hideyoshi). The regular actors on stage were also confirmed to be returning for the new stage play, despite the obligatory banter when everyone pretended that there was some doubt. When Ieyasu was announced, there was some joking about whether he was going to be the younger or the older version since it was set before Butai Sengoku Basara 3.

I really love how the stage play cast take such an interest in their characters and the series overall. It makes them seem all the more professional. It's also really cute when they abruptly slip in and out of character.

KobaP went on to announce the rest of the new characters for Butai Sengoku Basara 2: Shingen, Kenshin, Kasuga, Toshiie and Matsu. Every one of them received cheering from the crowd as well as enthusiastic reactions from the other actors. Murata was especially pleased about Kasuga, gushing that he'd been waiting for her to finally make an appearance!

The three new stars were invited on stage to introduce themselves as a surprise, though most of the discussion ended up being about how much taller Odai was than everyone else (he was towering over the other actors). The rest of the stage play details were provided and then the Butai Sengoku Basara 3 segment drew to a close.

Watanabe came back on stage and the final BSR48 countdown continued from where it had left off. The crowd was buzzing with excitement. Once they had counted down to 8th place, they paused so that KobaP could make the drawing to decide which one of the characters voted in the 10th, 20th, 30th and 40th positions would be joining the top seven in the upcoming special drama CD. He drew Nobunaga's numbered ball from a transparent plastic box without looking - after teasing the audience terribly by repeatedly picking up different balls and dropping them a few times.

The countdown then finished and it was explained that the drama CD would be a bonus item for a previously-unannounced new game: Sengoku Basara HD Collection for Playstation 3. For a small event, there were quite a few newsworthy revelations that day.

All that was left was some time for the seiyuu, and this began with a selection of Sengoku Basara 3 Utage audio drama performances. These were excellent, not least because they included some rarely-seen cast members and made use of special effects (for example, Muneshige's 'inner thoughts' were performed live with some microphone tricks whenever he switched speech patterns). The final audio drama was a shouting match between the two surprise guests, Nakai and Hoshi.

This led into the seiyuu 'talk corner', allowing them all to discuss the storylines in Sengoku Basara 3 Utage. Inada had dressed in a shirt and tie which matched Muneshige's livery and he even had a magnificent beard on display, so he was asked if he was cosplaying. Nakai and Hoshi lamented their unglamorous appearances in the backgrounds of their allies' stories, with Nakai imitating Masamune draped unconscious over a horse and Hoshi describing Yukimura's naive behaviour (which led to Sasuke slapping him) as rather pathetic.

A set of farewell messages from everyone came next, closing the event. Morita made a show of guiding newcomer Isaka since they play the same character (Keiji). During the closing speeches, KobaP made a final surprise announcement, this time about the brand new Sengoku Basara Official Fan Club 'Eiyuu No Kai'. This is where its nickname 'Hideo No Kai' originated, as by coincidence Watanabe Hideo's given name is written with exactly the same kanji as 'Eiyuu' ('hero'). Morita helpfully pointed this out on stage during the announcement, dooming the club to being referred to as 'Hideo No Kai' by giggling fans ever since. KobaP begged the audience not to reveal the results of the vote and the secret guests to the fans who would be coming to see the evening performance later in the day.

The bonus material consists of the other pair of talk corners from the evening event and some extra backstage footage. Kubota and Yoshida spent a lot of the second Butai Sengoku Basara 3 talk corner performing impromptu dialogues as Masamune and Kojuurou, then Nakamura joined in and made a surprisingly good Kojuurou himself. The backstage footage was grainy and it was quite funny seeing how relaxed everyone was, joking around at the camera moments before they were due to appear. Inada referred to Shiratori and himself as "Double Tetsu", while Hoshi and Nakai started jumping around on either side of Ishino chanting "Aniki!" adoringly over and over again. The backstage material also showed that Hoshi and Nakai had performed the pre-event message live behind the scenes. Since they were secret guests, the audience at the venue wouldn't have known that at the time! 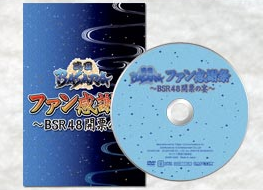 The full results of the BSR48 vote were as follows (with their total number of votes):

Mitsuhide suffered from fans splitting the vote between his main identity and Tenkai, but overall it paints an interesting picture of the popularity of the cast at the moment Utage was released. Poor Ieyasu was the only main character to miss out on appearing in the drama CD - even if the votes received by his younger self had counted, he'd still have failed to topple Aniki. I also find it deeply amusing that Kanbee narrowly missed out on 20th place by getting too many votes, then 20th place ended up being selected as the wildcard slot for inclusion in the CD. Poor Kanbee.

As usual there was a lot of complaining online about the results, mostly from people who hadn't actually voted themselves. Since I placed my vote for Masamune I was completely satisfied. It would have been difficult for there to have been a result I wasn't happy with, admittedly, since I adore so many of the characters from this series!

In summary, the DVD definitely felt shorter than usual since this was a smaller event than the semi-regular Basara Matsuri festivals. However, unlike other Sengoku Basara event footage which didn't receive a general home video release in the past, this DVD was well made and satisfying to watch. I wonder whether the fan club will produce any other unreleased footage for members in future?
at 10:24:00 pm