Next weekend on the 24th to the 26th May 2013, London Comic Con (also known as MCM Expo) will return to the London Excel exhibition centre for three days of merchandise, celebrities and stage events. They've finally released their programme online today so I've taken a quick look through it to pull out the most interesting attractions from my perspective. The ebook tool they use for the programme makes my main browser slow to a crawl.

With little interest in trendy television shows, Hollywood movies, cosplay or games, what I'm mostly interested in is news and information relating to anime, manga or Japan. In this post I'll summarise what seems to be on offer.

MangaUK were the first to post their plans and they have a two-page spread in the programme as a reminder. There'll be the usual discounts, special bundles and early releases at their booth #510 right in the middle of the hall. Exclusives will be a One Piece tote bag (limited to 300 customers) and a separate DVD release for the Highschool Of The Dead OAV, which isn't otherwise available separately. There'll be a prize draw to tempt customers into parting with some of their money.

Newcomers Anime Limited will also be at the event for the first time at booth #1003. They're off to a strong start by bringing famous anime director Watanabe Shinichirou - director of Cowboy Bebop, Samurai Champloo and Kids On The Slope - along with them to help promote their big debut. Anime Limited's first release will of course be Cowboy Bebop, due for release in the UK on Blu-ray and DVD starting in July. Signings will be taking place at their stand. Fans who have somehow stumbled upon this blog entry without knowing anything about Watanabe or his work should check out the three-page special feature in the online Expo programme.

Kaze have a small stand and no apparent marketing campaign around it - or is it shared with the Anime Limited stand? I can't read the number. It stands to reason that they'll be selling their DVD releases, possibly accompanied by some pretty trinkets from France and Japan to give fans an extra reason to check them out. Any actual news from Kaze is probably coming via Anime Limited or Manga UK.

I haven't seen any information from MVM Entertainment about their London Comic Con plans, other than confirmation that they'll be in attendance. Tony will be on stage for the industry panels, and no doubt they'll be offering special deals on their popular shows at their stand in the exhibition hall too.

The exception to my disinterest in the UK gaming industry is the Tecmo-Koei Europe stand. July's Dynasty Warriors 8 (Shin Sangoku Musou 7) will be playable at the show; I've got my fingers crossed that they'll have some merchandise on sale to tide me over until the release date.

Alternative 'warriors' title One Piece Pirate Warriors 2 is going to be present as well, presumably on the Bandai Namco stand. Capcom have a presence at the event but they have a habit of pretending any titles other than their current big hits don't exist. I'm not expecting any Sengoku Basara goodies from them.

Last of all, the old JapanEx event has been relegated to its tiny corner of the convention hall. It gets hardly any promotion. The stalls should be selling some tasty Japanese nibbles and souvenirs as usual.

I skimmed through the guest list on the London Comic Con website but didn't recognise anyone at all other than Watanabe. Not too surprising given the narrow scope of my interests.

It looks as though the stage schedule fares a little better; here are the highlights from the main stage timetable:

15:00 - Kids On The Slope screening with a Q&A with series director Watanabe Shinichirou

This looks interesting! It's good promotion for MVM Entertainment too who will be releasing the complete Kids On The Slope series on Blu-ray and DVD next month.

The usual spokespeople for the UK anime industry will be on stage to run through some announcements: Jerome Mazandarani (Manga UK), Tony Allen (MVM Entertainment) and Andrew Partridge (Anime Limited). They've only been allocated half an hour, though; will that be enough time?

A second chance for audience members to ask Watanabe some questions. I hope the room is packed so he can see how popular his work is in the UK.

The cream of the cosplay crop should be assembling on stage to vie for a position in the EuroCosplay competition. It might be fun, especially if people perform lively skits.

Exactly the same as Saturday's panel. I guess they might be dealing with the short timeslots by spreading their announcements across the weekend.

The finale of the weekend's stage events is the traditional Masquerade. It's probably fun to watch for the spectacle alone.

Finally, because I don't plan on rummaging through the ebook each time I want to check something, here's the floor map as a blurry composited image (I'll replace it if they release a better version themselves). 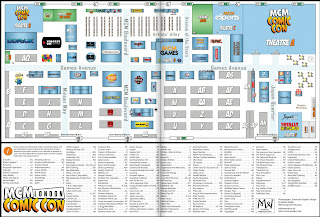 Of the booths listed, I'm most likely to visit the Japan Quarter area, United Publications, Otaku and the industry booths. Making out the corporate logos on the map is quite difficult. It's disappointing to see a fair number of well-known bootleg sellers still present this time around. It may be worth making a record this time of which stalls are trustworthy - the London Expo group don't take any responsibility for booths selling illegal imitation goods, so buyers need to exercise caution!
at 5:05:00 pm