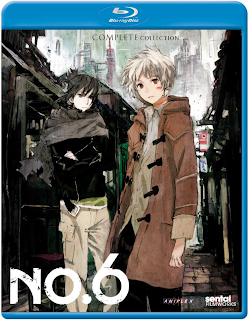 I've yet to see a noitaminA show that wasn't worth watching. No. 6 is an eleven-episode anime series from 2011 based on a series of novels written by Asano Atsuko.

Some elements of the setting reminded me of the earlier Loups=Garous movie (also based on a novel), though it's likely both share influences from earlier dystopian science fiction works. Sion is a young boy with a bright future ahead of him and a passion for science, living in a walled city (the titular No. 6) where peoples' lives are carefully controlled. Sion's comfortable world is soon turned upside-down when he encounters Nezumi, an escaped prisoner whose life he saves.

I didn't watch the dub. Kaji Yuuki's distinctive voice is immediately recognisable in the role of Sion, however, I'm less familiar with Hosoya Yoshimasa who plays Nezumi. He handles the character's difficult range of emotions perfectly. Shindou Kei stood out as the hot-tempered Inukashi as well, even though there was little doubt in my mind about the character's real gender (it was supposed to be ambiguous). The number of important characters is tiny so all of the leads have a great deal of screen time.

By the end of the series I'd grown attached to everyone in the cast - even Nezumi, who was initially too inscrutable to elicit much sympathy. One thing which should be noted is that the Sentai translation uses the English words for names where there's a direct equivalent, so Nezumi is 'Rat' in the subtitles and Inukashi is 'Dogkeeper'. This makes sense since their names are also their descriptions and it's a shame to lose that, but some fans are bound to find it grating to see the words translated instead of transcribed in the text. Overall, the subtitles are quite good for a Sentai release with only a few noticeable mistakes.


The story unfolds with a grimness which would make it a perfect choice for adaptation into a drama series or live action movie. As an anime it's an ideal fit for the noitaminA television slot. The muted colours and nuanced characterisation of No. 6 mean that it might appeal to a different audience to the usual otaku crowd without limiting itself to any particular demographic.

Having seen the forum discussions which occurred when the show first aired, I should mention that a certain type of viewer will find the show's treatment of homosexual themes problematic. I would strongly advise that people who cannot stand seeing two men who might be in a relationship avoid No. 6 entirely rather than watching it and then griping. Having said that, the BL content is only as much of a plot point as the viewer wants it to be; it's easy to rationalise it as a one-sided crush or awkwardly-expressed camaraderie. There's nothing explicit or uncomfortable shown on screen whatsoever. The characters have far more pressing things to be worrying about. 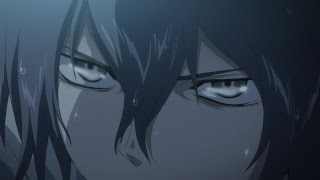 The closing theme by Aimer didn't stick in my mind, unlike the beautiful opening song by Lama, Spell, which gave the start of every episode an uplifting, bittersweet feel. It was one of many things which reminded me of UN-GO - another Bones noitaminA show which aired the following season. The animation which accompanies the opening theme is a good match for the music.

Speaking of music, No. 6 includes a surprising number of insert songs for a serious short story. These are performed by the characters and enhance the emotional impact significantly. 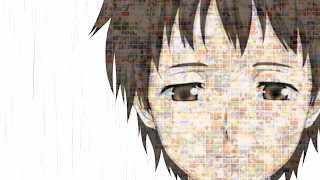 At the time of this post No. 6 has never been licensed in the UK. Sentai Filmworks gave it a full bilingual Blu-ray release in the US back on 21st August 2012. This is the version I watched. The extras are a set of Japanese commentaries, creditless opening and ending videos and some trailers. The DVD edition costs $59.98 and the Blu-ray is $69.98, though it should be possible to find both for $30-$40 with online discounts. Unlike many of Sentai's recent discs, the picture on the Blu-ray version is lovely and it comes highly recommended.

I'm glad that Sentai have been releasing niche titles like No. 6 instead of just focusing on big hits. It's a well-made show, though destined to alienate many viewers by virtue of its weirdness and the polarising BL subtext. Personally speaking, I'm delighted that I had the chance to watch this bleak story unfold for myself.
at 11:47:00 am