There are a few new comments about Sengoku Basara 4 floating around on 2ch and Twitter at the moment now that Sengoku Basara Magazine has been released. I haven't been able to verify the content of the interview with my own eyes as yet, so I'm going to refrain from speculating too deeply over the hints which have appeared so far.

The main piece of information that people have picked up on seems to be that the staff aren't sticking to a linear interpretation of historical events for Sengoku Basara 4, meaning that it's possible that we'll get the older version of Ieyasu instead of the younger one. There was also a comment about there being two pairs of leads. I think that it's most likely one will be Masamune and Yukimura, coupled with two new characters central to the end of the Muromachi period (one of which may be the younger Nobunaga everyone desperately wants to see). It's unlikely that all four will be new characters, and Masamune's family kamon is still part of the logo for the new game. Furthermore, if they're using the Sengoku Basara 3 version of Ieyasu, it contradicts their own timeline less to make Masamune and Yukimura play a more central part in the events set earlier in history; the pair of them were already involved with Nobunaga more tightly in the established Sengoku Basara version of history so there will be less rewriting required.

The other piece of information I saw was that the second issue of Sengoku Basara Magazine is due in July. It's a plausible date given that the magazine will be published quarterly so I'll confirm it as soon as possible. If I'm right about the four main characters for Sengoku Basara 4, that would let them put Yukimura on the cover of the second issue, then covers for the other two leads could bring us right up to the release of the game in 2014. This reasoning assumes that Capcom isn't planning on revealing too much about the characters shown in the trailer as silhouettes until the summer.

Oops, I said I wouldn't speculate.

There's a tiny bit of actual news as well: the pictures of the three final characters in their new stage play costumes can be seen in a photograph KobaP posted on Twitter. Yoshimoto looks hilarious, and Yoshiaki's pose is quite odd. My friends said that Kotarou resembles Robocop in the tiny picture. I'm looking forward to seeing some full event reports on Japanese gaming sites soon!

In the meantime, there's always more merchandise to report on. The Sengoku Basara Rubber Strap Collection from last year is being reissued in July 2013 in two separate boxes. The first set contains Masamune, Kojuurou, Hisahide, Ieyasu and Motochika. The second has Yukimura, Sasuke, Mitsunari, Motonari and Hideaki. Each box contains a 'secret' character, but as this is a reissue it's likely that they'll be the same as before: Keiji in the first set and Tenkai in the second. 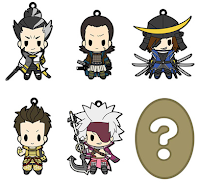 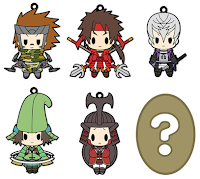 Using the same designs are some sticky notes due in June 2013 for ¥420 per pack. While the rubber straps seemed to split their characters into vague Eastern/Western Army groupings, the character selection for the Sengoku Basara Fusen Set Part 1 and Sengoku Basara Fusen Set Part 2 is less logical. Each pack contains five small packs of twenty sticky notes (15mm x 50mm). 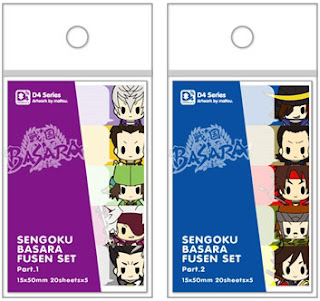