Event report: A visit to the Capcom Bar 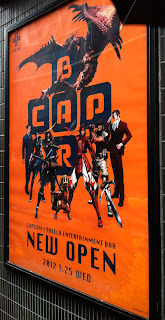 It's no secret that I adore Sengoku Basara. It's the reason I visited the Sengoku Basara karaoke room in Akihabara and the official Capcom shop in Odaiba, and it's a contributing factor to several of the pilgrimages I've made to historical sites in Japan before.

As part of this obsession, one of the locations I made sure to visit on my 2012 trip to Japan was the Capcom Bar, an 'entertainment bar' situated in Shinjuku, Tokyo. This post is mostly going to cover the crazy food my friends and I ordered during our visit, but I'll start by describing the bar itself in case anyone needs help planning a visit one day.

Capcom Bar is located in Shinjuku and might be difficult to find. The easiest way to get there is to navigate to Shinjuku Sanchoume station then take exit B9; it's a long underground walk but hard to get lost that way. A map and list of opening times is kept up to date on the bar's official website.

The first thing which needs to be understood when planning a visit is that the Capcom Bar is very popular. It's so popular that on the day we dined there, a queue had formed which stretched down the road even though the bar wasn't scheduled to open for another hour and a half. If you are a fan of the Biohazard series (Resident Evil), it might be worth trying the separate Biohazard Cafe and Grill S.T.A.R.S. in nearby Shibuya instead.


Because of the high demand, the bar requires that every visitor reserves a time slot in advance (that's why we were queued up outside to begin with). At the time it was only possible to book in person - slightly annoying, as even though we'd arrived early the queue was so long we had to pick the second time slot of the day, leaving us with a long wait before our meal. Since then, the staff have introduced telephone bookings and Lawson convenience store reservations which should streamline the process. 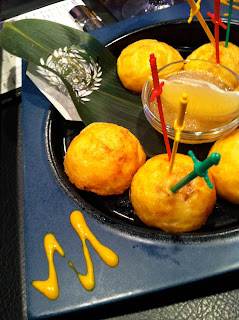 I'm not sure whether it's still done this way, but we had to complete an order form for our food in advance as well to avoid delays; each time slot is only two hours long so you don't want to waste any time. The names of the menu items are all in Japanese, so if you don't speak the language it's a good idea to check the website before you visit and make a list of all of the dishes you want to order. It will make completing the reservation form much easier. If you can read Japanese, there are detailed menus outside the bar which give much more information about the food than the website. It's quite fun to wait in the lobby area leafing through the menus, making use of the free shaved ice machine and gazing longingly at the merchandise on display.

When our reserved time slot was due to begin the staff rounded everyone up and gave a rousing introduction ("Let's party!") to get all of the guests in the mood for some fun. We were then led inside the Capcom Bar and given time to look around at the decorations bathed in blue neon lighting. Small screens were set up next to the tables to show trailers from various Capcom games and merchandise from Monster Hunter and Sengoku Basara covers all of the available wall space. There were some consoles available too for people who had time to play (nobody did when we were there; the food was too interesting!).

The most prominent Capcom games represented on the menu are Monster Hunter, Gyakuten Saiban (Phoenix Wright: Ace Attorney), Sengoku Basara and Biohazard, with Street Fighter and Devil May Cry appearing too. Since my visit a few items from Dragon's Dogma have also been added to the list and there are occasionally special events for other games.

As soon as everyone had settled in, it was time to dine!

The drinks were served first of all. One of the obvious problems with visiting a bar is that I don't drink. My friends don't either, so our entire table was limited to the non-alcoholic beverages. I couldn't decide which of the three Sengoku Basara options I wanted so I chose both Uesugi Kenshin: Magokoro Wo, Kimi Ni ('For You, My Sincerity') and Maeda Keiji: Hitomebore ('Love At First Sight'), passing on the maccha-flavoured Sarutobi Sasuke: Kumogakure No Jutsu bubble tea. It's a shame we couldn't indulge in Masamune's cocktail, appealingly named Date Masamune: HELL DRAGON. 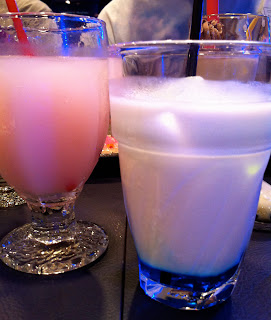 As soon as our waitress brought our glasses to the table we discovered why it's called an 'entertainment bar'. Every time the staff placed something new down in front of us, they drew attention to it by performing a line from the series. Because Kenshin and Keiji interact often in Sengoku Basara I was treated to both of their lines being spoken together as though they were conversing (I was particularly thrilled that it was one of the female staff members who imitated Kenshin!).

Of the two drinks, Kenshin's was more to my taste; it had a layer of blue syrup at the bottom which made the white, Calpis-flavoured body of the drink turn a satisfying pale blue when mixed. Keiji's drink was sweeter with a fruity flavour. It suited Keiji's friendly, flamboyant personality.

Next came the food.

I'm proud to say that between us, my table managed to order almost every single Sengoku Basara food item on the menu. We only missed out on the Toyotomi Hideyoshi: Enbu Gouhaku tomato jelly and Tokugawa Ieyasu: Mie Goreng Youganwari wrapped fried noodles. Since everything had been ordered in advance there was no waiting; it was two hours of non-stop Capcom-themed cuisine.

The bar is quite small so everyone can enjoy watching the staff performing skits for other tables; we hadn't ordered from the Street Fighter menu but we were still able to enjoy the waiters shouting "Hadouken!" at one another. There was a special Monster Hunter campaign running during the time of our visit and almost every table had ordered a dish which required the waitresses to start singing and marching around whenever it was served. The atmosphere in the room was delightful.

Here's what we ordered from the Sengoku Basara menu!

This dish is called Chousokabe Motochika: Buttataki Katsuo No Tataki, a Tosa-themed platter of pounded skipjack tuna. I think it suits Aniki very well. I loved the way that his family crest is represented in the background too. 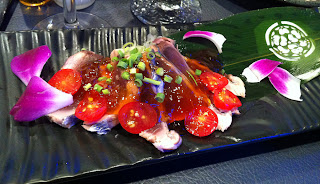 Maeda Keiji: Tako No Renka Carpaccio was quite similar; an attractive plate of seared octopus cut very finely. The scattered petals blend in with the octopus slices so it looks like a big flower. 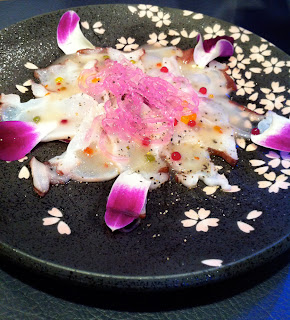 This next one was my favourite in terms of taste. Katakura Kojuurou: Jiyou Pasta isn't the most dazzling dish to look at, but it represents Kojuurou well in its simplicity and it tasted divine. I've wanted to go back to the bar and order it again ever since! The vegetables mixed in with the pasta include gobou burdock and leek, representing Kojuurou's original joke weapons from the games. 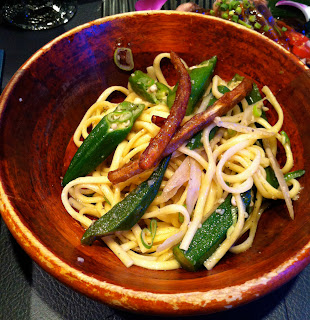 Sarutobi Sasuke: Kouga Shuriken No Katsudon was just regular katsudon, served on a triangular plate to evoke images of Sasuke's shuriken from the game. I wasn't entirely convinced. 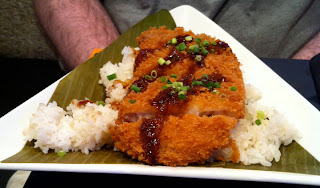 Motonari was represented by a hearty salad, decorated with okra shaped like his eboshi hat and a yellow tortilla chip halo to represent the sun he worships. It had a long, colourful title which made me glad we didn't have to order anything verbally, especially as I'd have felt obliged to try to do so in his voice - Mouri Motonari: Ike! Okura Yo! Waga Sarada No Kate Tonare! ('Go! Okra! Become An Ingredient In My Salad!'). 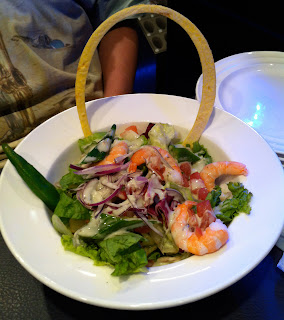 One of the most stylish choices was Date Masamune: Mugen Rokusouryuu Akashiyaki. Akashiyaki are gooey octopus balls. I loved the way that the presentation incorporated the lightning bolts, Date crest, six swords and his blue/gold colours. The fact that the swords were silly plastic toys didn't seem important. 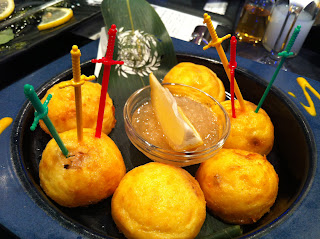 For dessert, Ishida Mitsunari: Zanmetsu Creme d'Ange was a tasty choice. The thick cream was wrapped in a fine net (supposedly shaped to resemble Mitsunari's hairstyle). I liked the contrast between the pure white cream and the dark red fruit compote. It goes well with Mitsunari's complicated personality, and perhaps it's also a reference to his 'bloody angel' theme? 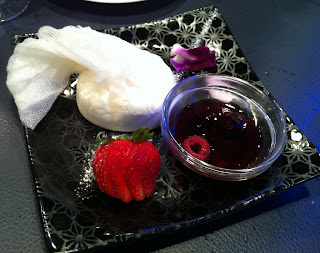 The last Sengoku Basara dish was my favourite. Sanada Yukimura: Sanada Kamon No Rokumonsen Dango was a set of Yukimura's favourite mitarashi dango with six chocolate coins to represent his famous rokumonsen crest. A flash of red sauce and two 'spears' were the perfect finishing touches. When the waiter brought us our dango, he spent a while composing himself before launching into a typically hot-blooded greeting. As he was leaving, my partner shouted after him and soon they were both ad-libbing an "Oyakata-sama! Yukimura!" exchange across the bar. Their antics caused ripples of laughter from the other guests nearby. 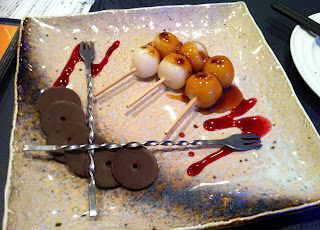 I haven't included a picture of the Devil May Cry Dante To Virgil No Kessen Caprese this time, but the Gyakuten Saiban inspired Sono Sauce Ni "Igi Ari!" Onion Rings ~Saibanchou No Kizuchi Croquette-tsuki~ ('Onion Rings: I Have An "Objection!" To That Sauce ~with Judge's Gavel Croquette~') are below. When it was time for these to come out of the kitchen the staff made everyone in the room stop what they were doing and hold an impromptu court session with shouting and dramatic finger-pointing. 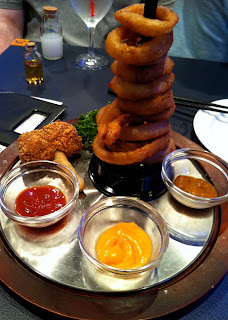 And no visit to the Capcom Bar can be complete without someone deciding to try the famous Brain Cake inspired by the Biohazard series. It comes complete with a knife shaped to look like a scalpel. Even though it looks dreadful, the cake is a normal Mont Blanc topped with raspberry sauce. The people at the table behind us were so excited by the Brain Cake that they had ordered one each. 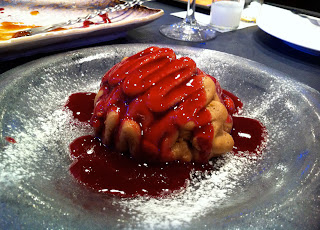 During the meal there was also a prize draw to win an exclusive Mogami Yoshiaki tin badge. The waitress who announced the draw did a magnificent Yoshiaki impersonation when she was explaining the prize. We didn't win the badge, unfortunately, but that didn't mean we went home empty handed... 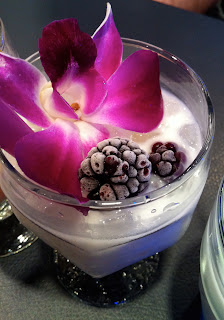 One of the reasons the meal was so expensive is that the Capcom Bar doubles up as a shop! You can browse a catalogue of goods while you eat and complete a reservation form, then when you pay the bill at the end the staff will hand over your bag of goodies. Some of the items they sell are hard to find elsewhere so it's quite convenient. I took advantage of the shopping service to purchase a back issue of Capbon and some other Sengoku Basara treasures that I couldn't find elsewhere.

The two hour visit flew by and soon it was time to leave, with everyone feeling extremely full and satisfied. We were given some vouchers, commemorative coasters, garish orange carrier bags and cute Monster Hunter fans to take away with us. We were also taught about the incentives for making repeat visits, like a loyalty card which is marked each time you dine to eventually earn a prize, and a separate stamp card where hardcore fans can track their progress in a quest to eat every single dish on offer.

Our afternoon at the Capcom Bar wasn't cheap, but it was hands down the most fun I have ever had inside a bar. I would go back again in a heartbeat.
at 12:27:00 am