News round-up: A place to order Sengoku Basara Magazine, and new merchandise on the way 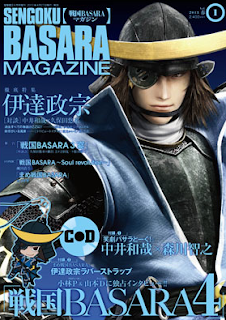 I was beginning to panic about the lack of availability of the first issue of Sengoku Basara Magazine which comes out next week on the 27th April 2013. Several sites have it listed (including e-Capcom, Amazon and Hobby Search Japan) - and all of them seem to have closed their preorders ridiculously quickly. It's a magazine, not a limited edition figurine!

Anyway, after hunting around I finally discovered that HMV Japan are still accepting preorders. Although the sales tax is waived it will be expensive, since they only ship overseas using EMS and it's going to be quite heavy. At least it means that I'll receive it more swiftly, even though any juicy Sengoku Basara 4 information inside will have been leaked online long before it reaches my letterbox.

The magazine will probably be made available for purchase everywhere else again soon, once it's been released properly, but I feel so much better now I have an order placed!

In my hunting I also came across a couple of new merchandise goodies which are due for release in June this year.

The second new merchandise item is the very similar Bushou Sticker Collection Box. It's a collection of deluxe stickers for a painful ¥6,720, also due for release on 27th June 2013. This time, Honda Tadakatsu and Kasuga replace Ootani Yoshitsugu and Takenaka Hanbee. 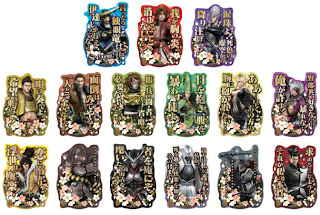 The prices of these boxes make more sense when you consider that physical shops will be able to sell the individual items one at a time as a lucky dip; I'm not sure I could make use of sixteen clear files or stickers by myself to justify the shipping costs. Between both sets most fan-favourite characters get to appear at least once so I wouldn't feel disappointed randomly receiving any of the designs.

One potentially interesting aspect of all of this is that both the files and the stickers are available in sixteen designs. However, only fifteen have been revealed. The secret character in each set is almost certainly someone like Oichi or Hideyoshi, but what if it's a brand new picture or a Sengoku Basara 4 illustration instead..?