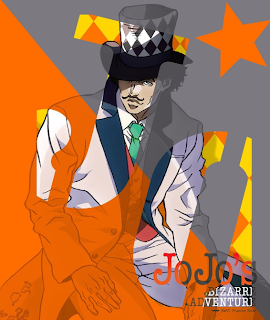 I picked up the second volume of the recent television adaptation of JoJo's Bizarre Adventure on my recent trip overseas. This disc contains episodes four to six, covering the middle of the Phantom Blood arc.

As with the first volume, the series has stunning visuals and fantastic, over-the-top voice acting. The quality of the presentation on the Japanese Blu-ray disc is magnificent. There's still no sign of a western release - or even a legal English-subtitled stream of the show - so I'm relieved that the Japanese edition has been handled with such care.

JoJo's come a long way since the start of the series. He's been forced to leave his innocent boyhood behind and found some allies in unlikely places, most prominently the reformed thug Robert E. O. Speedwagon from the first volume who has decided to stay around and help JoJo as much as he can.

Speedwagon steals most scenes with his melodramatic narration and reactions to everything that happens. I think it's impossible not to love his ridiculousness; even if he has completely abandoned his intimidating appearance from the previous volume he's so adorable like this that it doesn't matter at all. 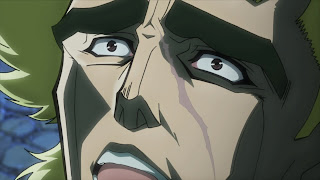 Anyway, I should say something about the plot instead of talking about how amazing Speedwagon is for the entire post. After the fast-paced start to the series I was worried that there wasn't much farther that the Phantom Blood arc could go, having already covered enough material to fill a normal television series within its first three episodes.

It soon turns out that Jonathan Joestar's problems aren't over yet as he encounters the mysterious Baron Zeppeli. Zeppeli seems intent on dragging poor JoJo into even more trouble, but he's kind enough to introduce him to some new techniques first. The episodes on this disc consequently teach us all about hamon, the foundation of a new fighting style which might give our hero the edge over his opponents. 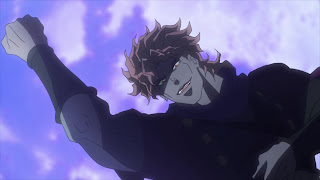 It turns out that JoJo very much needs that edge, as Dio has wasted no time in mastering his new powers and setting himself up as a classic villain - now with an even greater grudge than before. His unwavering dedication to his role as the antagonist is an inspiration; criminals all over the world should have posters on their walls to encourage them to strive to be as evil and twisted as Dio.

With another clash between JoJo and Dio seeming inevitable, the three unlikely heroes head to the town of Windknight's Lot to confront the swarm of criminals and undead warriors lying in wait for them. The classic shounen battles which follow are turned into impromptu training sessions by the unpredictable Zeppeli. Every time I think that the series has reached its limit for craziness, it bowls me over with Zoom Punches and various rainbow-hued Overdrive attacks. My excitement turns into laughter (then straight back into excitement) many times over the course of each episode. 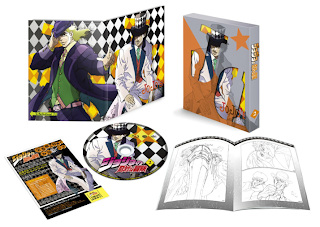 JoJo's Bizarre Adventure volume 2 was released on 22nd February 2013 and is available as a special edition Blu-ray or first press DVD (picture). The standard Blu-ray and standard DVD aren't being made available until the first press versions have sold out. Once again, the first press DVD has a special slipcase to set it apart from the standard edition while the Blu-ray has a more interesting 64-page 'Key Animations ~Phanton Blood~' booklet accompanying its special packaging (pictured). The second proof of purchase ticket you need to collect to claim your special statue at the end of the series is also included, of course.

JoJo's Bizarre Adventure hasn't lost any momentum so far, continuing to be memorable and entertaining with every episode. I can't wait to watch volume 3 next week!
at 7:56:00 pm