Today I received something I had been long been hunting for; the Animedia tie-in Sengoku Basara Yomifuda CD Tsuki Karuta set; in other words, a pack of Sengoku Basara karuta cards with a matching CD.

This set was originally obtained by sending in proofs of purchase from issues of Animedia from September, October and November 2009 along with one from the October 2009 issue of Seiyuu Animedia. It comes with a CD featuring Nakai Kazuya (Date Masamune) and Morikawa Toshiyuki (Katakura Kojuurou) reading their famous lines; you're supposed to put the CD on random play and race your fellow players to match up the spoken lines with the corresponding cards. 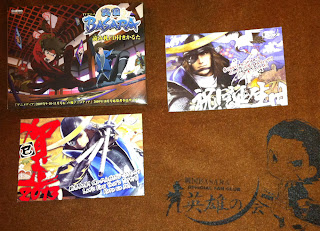 I wasn't able to apply for the giveaway (and I rarely buy Animedia anyway, let alone Seiyuu Animedia) so for the last couple of years I've been haunting secondhand stores waiting for my chance to buy an unwanted set. Every time I was too late, and the price of the cards on Yahoo! Auctions has been increasing fast. I felt very lucky when a pristine set became available from a Japanese used goods store online for a very fair price.

Accompanying the karuta set are some cards of a different variety: my long overdue birthday message and New Year's 'nengajou' card from the Sengoku Basara fan club! I picked the Masamune designs during signup, and that's what was sent. They're very late but it's the thought that counts (even though I technically paid to send them to myself).
at 7:52:00 pm