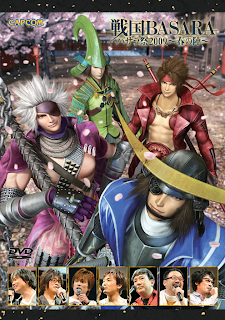 After being spoiled by two Basara Matsuri events in 2007, the next major Sengoku Basara gathering didn't take place until the spring of 2009. Basara Matsuri 2009 ~Haru No Jin~ was held on Saturday 2nd May 2009 at Hibiya Koukaidou (Tokyo Metropolitan Hibiya Public Hall). There was a gathering in the afternoon and another in the evening; each attracted an audience of around 2,000 fans.

There hadn't been a new game for a while until PSP spin-off Sengoku Basara Battle Heroes had been released a month before the event. April 2009 was also when the first season of the Sengoku Basara television anime had made its debut. There were two radio shows running too, so although it was a dry period for fans of the main games it was a good time for the series as a whole. As Basara Matsuri 2009 came before the teasing for Sengoku Basara 3 began, the event was a relatively relaxed affair to promote the recent release of Battle Heroes and allow fans a chance to get together and enjoy watching the seiyuu fooling around.

The list of guests at Basara Matsuri 2009 was as follows:

Sengoku Basara series producer Kobayashi Hiroyuki (KobaP) was also in attendance, as was series narrator Watanabe Hideo who acted as the MC.

The DVD version of the event was released on 16th October the same year for ¥5,040. It contains 129 minutes of footage recorded at Basara Matsuri 2009 and is still easy to find on sale today. There's a very thin colour booklet included which contains profiles for all of the guests besides Watanabe and some small photographs. The bulk of the footage on the DVD came from the evening performance.

The first pressing of the DVD also came with a 'PR' promotional card for the Japanese trading card game Weiβ Schwarz. I don't play the game so the card only caught my eye for its novelty value and the Tsuchibayashi Makoto illustration on the front. A glimpse was also made available to people who didn't get the first pressing via an official sample image. 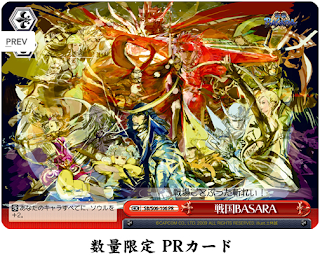 The event opened with a performance by Chanbara Project, a group of musicians who blended traditional taiko drumming with electronic sounds and a live combat sequence. Acrobatics, weapons, costumes, flags and umbrellas gave the display an immediate atmospheric feel. While the performance didn't really have anything to do with Sengoku Basara, it was an appropriate choice for a historically-themed festival event. For once, the entire opening sequence made it to the DVD intact.

The seiyuu guests then came on stage, accompanied by some light drumming, and Watanabe Hideo started his work as MC. KobaP joined the others on stage to lead a 'Talk Corner' discussion with the voice actors to discuss Sengoku Basara Battle Heroes.

The funniest part was when Morikawa made fun of Hanbee, calling him Takenoko Hamburg ('bamboo shoot Hamburg steak') when discussing his role in Kojuurou's story mode. The mean nickname originally came from the Sengoku Basara radio show Morikawa and Morita hosted and became an in-joke amongst fans, as well as an easy way to pick on Ishida Akira (Hanbee's voice actor). Since Morikawa was talking about how loyal Kojuurou remained even when being aggressively courted by the Toyotomi forces, mocking Hanbee's name made it clear that he was completely supportive of his character's choice. It was cute.

After the talking was over, the guests formed four pairs (KobaP joined in to give Nakahara a partner) to  play Battle Heroes live on stage. This segment was called the Gotouchi Gourmet Soudatsu Team Tournament ('Regional Speciality Gourmet Team Tournament Contest'). The gimmick was that the prizes were foods which related to regional dishes from parts of Japan. There was beef tongue and shark fin soup from Touhoku (the home of Masamune and Kojuurou). The neighbouring regions of Chuugoku (Motonari) and Shikoku (Motochika) were represented by a 'hyakunen Tosabushi' platter - dried bonito flakes from Tosa - and fugu tecchiri (blowfish hotpot). Ieyasu's home region of Chuubu offered a 'Mikawa set' made up of eel, Cochin chicken and miso-katsu; all Nagoya specialities. Ten kilos of world-famous Koshihikari rice represented Keiji, while two items were chosen for the Kansai region due to its strong ties to both Hisahide and Capcom: premium Uji green tea and takoyaki equipment.

The battle kicked off with Masamune and Keiji versus Ieyasu and Kojuurou. When the former team triumphed there was significant gloating. Next, the team of Motonari and Oichi (KobaP) was defeated by Yukimura and Motochika. The reason that Fujiwara was using Yukimura was of course because Hisahide isn't a playable character in Battle Heroes. KobaP always seems to choose Oichi...

The four winners squared off in the deciding battle until Masamune and Keiji emerged victorious. They had been saying all along that they wanted the rice as their prize, and that's what they chose - even with everyone else trying to persuade them to take the beef tongue instead ("What if it's ten kilos of beef tongue?!" "Are you trying to start up a shop...?").

The next segment was the 'Afureko Corner', or live dubbing session. It was quite handy having having Watanabe as MC as he could introduce each scene in the same style as the games. First of all came a batch of scenes from the game series, including a special dialogue created for the event with Hisahide confronting Masamune and Kojuurou in his inimitably obnoxious way. This was followed by the seiyuu guests performing scenes from the anime version of Sengoku Basara live on stage - with the twist that it was now a 'cast shuffle' session where they all had to voice the wrong characters.

First came a classic punching scene from the second episode starring Yukimura (Nakai), Shingen (Morikawa) and Sasuke (Nakahara). The seiyuu looked nervous as the roles were read out (except for Nakahara, who simply said "Sasuke is a ninja." with an air of satisfaction) but when it came to the time to perform they were hilarious; I was crying with laughter as I watched. Morikawa was a tremendously accurate Shingen, while Nakai threw himself into parodying Yukimura's overexcited tone and making physical gestures to accompany his words.

Next came the scene where the two rivals met for the first time in episode one, featuring Yukimura (Ishino), Masamune (Morita) and Kojuurou (Nakahara). For some reason Ishino decided to read the entire script in a falsetto voice up until his final battle cry, so the other two were stifling laughter whenever it was time to respond. The same scene was then repeated with Fujiwara as a rather camp Yukimura and Ookawa as Masamune. Nakahara performed in all three sessions since his roles were so small.

The strangely-titled 'Capsule Talk' came next. A rack of capsule vending machines was placed behind the guests, some priced at ¥100 and some at ¥500. Each seiyuu had to buy a capsule from a machine of their choice and then perform some kind of challenge according to instructions written inside. It was completely random except that the ¥100 challenges seemed more embarrassing than the more expensive ones. Ookawa and Nakahara only had to talk a little about the series, but Ishino had to reminisce about Sengoku Basara in character. He did this with gusto, happily rambling in Motochika's aggressive tones. Morita had to draw a picture of his character's clan crest. He drew the word 'hen' ('strange') in the same style as Keiji's usual 'love' kanji; they both have the same radical at the top so he'd arranged the paper to gradually fold down to reveal the surprise. He'd decorated it with Keiji and Yumekichi and after explaining why he'd drawn it that way, it was handed to a lucky member of the audience.

Morikawa's challenge was quite similar as he was charged with drawing a new seventh weapon for his character. He designed a gigantic dairy cow familiar (complete with an eyepatch and fangs) who charged around the battlefield knocking over enemy soldiers. It was described it as being about as strong as Tadakatsu. Kojuurou would ride around on it rather than equipping it like a traditional weapon.

Nakai's capsule triggered a video message from absent seiyuu Hoshi Souichirou (Sanada Yukimura) who'd been asked who he thought would be the one to draw his capsule from the machine. He guessed correctly that it would be his rival! Hoshi's message was quite long and included an impromptu one-man 'Oyakata-sama! Yukimura!' skit. For some reason, Nakahara decided to imitate all of Hoshi's expressive hand gestures during the video from his seat on the stage. As soon as I'd noticed what he was doing it became difficult to keep my eyes on the video message.

A lengthy batch of farewell messages from the guests followed the capsule antics, then there was a curtain call with each seiyuu reading a final line in character.

The only bonus feature on the disc was the alternate version of the 'Afureko Corner' collection of anime skits from the afternoon Basara Matsuri event. As this had been the first of the two performances, the seiyuu were surprised when the first clip was shown since none of the actors who had originally recorded the lines were present to perform them live. "What should we do?" asked Watanabe, theatrically, "Today is Basara Matsuri! In other words, we're going to have a special feature: cast shuffle! Is that ok?". As it happens, two of these afternoon skits were used in the second video I posted recently at this link.

The first scene used in the afternoon performance was from the first episode of the anime, with Shingen (Ishino) ordering Yukimura (Morita) to set up his 'woodpecker maneuver' with some muttering from Sasuke (Nakahara). Ishino completely stole the show with his coy, camp version of Shingen - though Nakahara's sociopathic Sasuke was also worthy of praise.

The second scene was the same one that was used in the evening show. It was performed twice, once with Nakai as Yukimura and Morikawa as Masamune. Finally, Ookawa took over as Yukimura and Fujiwara played Masamune. Morita was Kojuurou both times. Ookawa's Yukimura sounded ludicrously bratty (on purpose), while Fujiwara's Masamune was almost too cool.

That ten minute extra concluded the DVD footage. A few segments from the event were omitted, most noticeably KobaP's usual news roundup where he stunned everyone by announcing the first ever Butai Sengoku Basara stage play for July 2009. The other major announcement was for a 'Dategun Tour' where he'd personally accompany fans on a trip to historical sites relating the the Date forces.

With no major game announcements to make, Basara Matsuri 2009 ~Haru No Jin~ was a less flashy event than usual aimed squarely at seiyuu fans. The DVD recording was a worthwhile purchase for the 'cast shuffle' skits alone; however, the lack of backstage footage and announcements really made me appreciate the magnitude of Basara Matsuri 2012 ~Natsu No Jin~ DVD I watched previously.

Some photographs taken live at the event can still be viewed online via the event reports from MyNavi, Dengeki, Famitsu and Gamez.
at 6:16:00 pm