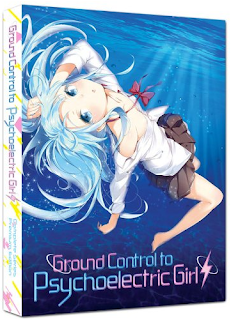 It doesn't feel as though it was all that long ago that NIS America announced that they'd acquired the rights to the 2011 Shaft anime Denpa Onna To Seishun Otoko back in October, and now I already have it in my hands. The official English title is Ground Control To Psychoelectric Girl; I'm not entirely fond of the 'ground control' reference but I like the way the aesthetics of the title match the original. And 'psychoelectric' both sounds cool and makes the box set easy to search for online. Good job, NISA.

NIS America have given the series a splendid US release in the form of a limited edition set, containing all twelve televised episodes as well as the single bonus episode from the Japanese release. Both Blu-ray and DVD discs are included. I watched the BD version for this review; the sharp artwork looks fantastic in high resolution. There's no English dub and NIS America have a notice on their website that the English subtitles are locked so they can't be turned off (a license stipulation to discourage reverse importation from Japanese fans). However, I'm lucky enough to have a playback device which can still disable them as normal, so I'd like to make the point that locked BD subtitles are nowhere near as severe a flaw as hard subtitles placed directly on the video streams were in the old days. On-disc extras are limited to creditless opening/ending sequences and trailers, and the set also contains a hardcover art book and bundles everything together in an oversized chipboard box. The design of the packaging is beautiful. If I saw this in a shop there's no way I'd be able to resist picking it up. 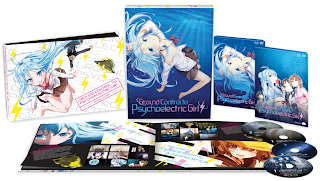 I'm usually not all that fond of fluffy romances involving helpless schoolgirls and weak male leads obviously designed to allow the viewer to project onto them. There's been a terrible glut of this kind of series thanks to its popularity in the light novel industry at the moment, and while there are some gems to be found there is also a large amount of generic tripe.

So there was a danger that I might have passed this series over entirely, had it received a quiet release from a larger company or come with less attractive packaging. Fortunately, I stumbled upon the opening video back when it was originally airing. The series' theme song is a collaboration between Erio's voice actress and the eccentric musicians Shinsei Kamattechan and it's easily one of the best anime openings I have heard in years. After just one viewing of the memorable title sequence, I knew I had to buy the show one day. The bouncy ending theme is adorable as well - musically, Denpa Onna To Seishun Otoko is a cut above its peers.

The other aspect of the show which immediately stands out is that the characters are all beautiful thanks to artist Buriki's work on the original character designs. I'd like to believe that I'm reasonably desensitised to adorable doe-eyed schoolgirls, yet this series has some exceptionally lovely artwork. It helps that the colours used in the anime are vivid; Erio's attention-grabbing blue hair highlights her unworldliness while also being easy on the eyes. Even the male lead is a genuinely cute-looking, likeable guy rather than one of the weak-willed doormats who usually star in series of this kind. It may be a show about aliens and psychic powers, but the beautiful artwork helped ground it in reality by making the interest that all of the characters had in one another feel plausible. 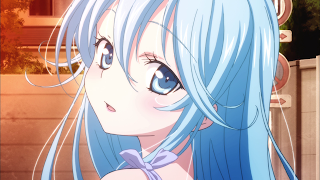 With such strong visuals and audio from the talented creators, it would have been awful if the plot let Denpa Onna To Seishun Otoko down. Thankfully, that isn't the case. The story is an offbeat take on the standard 'magical girlfriend' genre, with light harem elements as young Makoto strives to enjoy his youth to the full. Unlike most young boys in his position (if anime is anything to go by), he seizes every opportunity he's given with enviable purity of thought. When he discovers that he has an oddball cousin called Erio - a shut-in who refers to herself as an extraterrestrial and avoids opening up to others - he courageously approaches her and tries to earn her trust. Along the way, the two adolescents stumble through the challenges of making friends, fitting in and finding a place for themselves in the world. My impression throughout was that Denpa Onna isn't a harem show no matter how many cute female characters it happens to contain; it's simply an unusually lovely story about growing up and finding yourself.

I watched the whole of the first disc (nine episodes) in a single day because I was enjoying the anime far too much to take a break. My interest dipped a little at the start of the second disc, mostly because the less interesting supporting characters are given a chance to take centre stage for a while. In spite of this, it wasn't long before the plot regained its momentum and sped towards a completely satisfying climax, leaving me wishing that I didn't have to say goodbye to Makoto and his friends so soon as the final end credits scrolled.

One thing I've noticed in discussions online is that some viewers interpreted the series as making light of mental health issues, which I strongly disagree with. Even though the plot is crazy, the portrayal of the debilitating problems some of the characters struggled with actually felt more human and sympathetic than I'm used to. Makoto is the perfect rock for someone in trouble to rely on, never exploiting or making fun of those around him. Erio's helplessness is visually attractive, yet nobody in the series itself takes advantage of her and the way that the characters' quirks were dealt with always seemed reasonable, too; nobody was forced to change against their will.

Erio's mother has also been criticised for having been unable to 'solve' her daughter's quirky issues for her, which feels especially unfair. The pair of them have a loving mother-daughter relationship and she clearly respects Erio deeply. However much commentators on the Internet may dislike it, the message that even a young, fragile person needs to have the right attitude in order to keep moving forwards seems a lot stronger to me than the alternative of having a super-parent solving all of their child's problems for them. 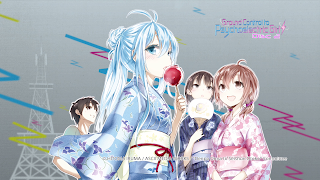 Purchasing NIS America releases is mildly inconvenient for fans in the UK, since they're generally limited to specialist retailers. Rightstuf.com is a reliable source so long as you remember to factor in the customs charges that you may be hit with once the order arrives in the country (I recommend buying several items at once to limit the burden!). NISA also offer a limited edition lunch bag if you purchase the show through their online store. Alternatively, if you don't mind waiting until after the release date Amazon.com often has a few people selling copies to the UK that way. If you use the 'Fulfilled by Amazon' option and pick courier shipping, you can prepay the customs fees in advance which is always cheaper than paying Royal Mail upon arrival - not to mention faster. I purchased my copy from a UK-based importer, so I didn't have to worry about customs directly and instead paid a little extra to begin with. Anything to avoid Royal Mail's dreadful combination of high processing fees and delays! 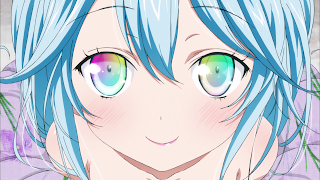 According to American seller Robert's Anime Corner Store, one month after its release the first print run of Ground Control To Psychoelectric Girl had already sold out in distribution channels. NISA will be making some extra copies for circulation in the spring; after that future buyers will have to make do with a standard edition instead of the gorgeous artbox. I urge anyone who has an interest in the series to pick it up as quickly as possible to avoid disappointment!
at 8:41:00 pm