News roundup: Atlus still suck, however, Magi is coming to the west

It's a rare day when there's nothing Sengoku Basara related for me to post! The current buzz in the fandom is split between the Valentine's Day event in the mobile phone game and feverish speculation that the Sony event in a week's time will reveal both the Playstation 4 and a new Sengoku Basara title. These two stories aren't really worth posting about in detail, but fortunately some other things have happened recently which are. I'll post the interesting news items first and rant about the negative ones at the end so it's easy to stop reading when it gets too angry.

First of all, some good news: Magi is coming to the west. It's hasn't been formally announced, but the UK arm of manga publisher Viz has revealed that it's scheduled to begin publication in August this year. Viz UK get their books straight from the US so we can expect an announcement from that side of the pond soon as well. I'm very excited about this since most people seem to agree that the anime adaptation of Magi (which I love!) is inferior to the original manga. Now I can have twice as much Sinbad! 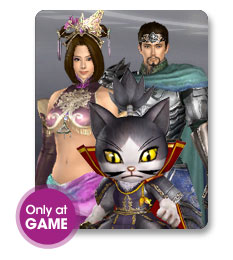 Secondly, Tecmo-Koei Europe have announced a UK pre-order bonus for the upcoming PS3 game Dynasty Warriors 7: Empires (Shin Sangoku Musou 6: Empires). Fans who order from Game will receive a bonus costume pack containing classic costumes for Zhao Yun, Diao Chan and one for Nobunyaga, which can be used to customise your characters when the game is released.

Dynasty Warriors 7: Empires will be released in the UK next Friday on 22nd February. There's not much time left to get your hands on the pre-order bonus!

The last piece of news is less positive: Persona 4 Arena (Persona 4 The Ultimate In Mayonaka Arena) recently went on sale digitally on the Playstation Network in the US and Canada. Unfortunately, it's been discovered (by the sympathetically-named Was_An_Atlus_Fan) that the digital version is region locked just as the physical release was. The European edition never did come out, with its original already-delayed August 2012 release date slipping gradually. It's currently scheduled for May 2013; any Persona fans who are still left outside the prime regions can finally see what everyone else was playing a year ago a few months from now.

I still don't understand why the Japanese version was region locked. The official line from Atlus was that the American version was so cheap that it had to be locked, but the fact that the Japanese one was as well makes it feel as though the real reason was to make the European version (which still doesn't exist) sell better by forcing everyone here to buy it instead of importing. Personally, I hope it sells terribly here and sinks like a stone. I shall continue to boycott all Atlus-related series until they reassess their treatment of foreigners.

For some reason, a while ago the official PersonaEurope Twitter started following me on Twitter out of the blue before swiftly unfollowing me a couple of days later. Given my vocal condemnation of the way that international Persona releases are handled, it's hard to know what they were thinking.

While I'm in a critical mood, I've been checking the Anime On Demand website on a daily basis since the very start of the year and I've been extremely disappointed to find that three of their six simulcasts for the season have still yet to surface. Crunchyroll is about to air the seventh episode of Maoyu for American fans, yet our service hasn't even managed to get the first one online, and what makes things worse is that they are completely uncommunicative. Their sluggishness is responsible for having delayed my Winter 2013 first impressions (which were originally written to help promote their services!) all this time since I was hoping to put everything in one single post. I'm beginning to think I should just treat the two missing shows as unlicensed rather than continuing to wait for simulcasts which will probably never happen; the Anime On Demand website still doesn't even have the original announcements that they were acquired yet.

I don't understand why companies spend so much time and money promoting their site at expensive trade shows when they're so unwilling to give fans a reasonable amount of information about what their service is doing. It makes people who recommend them to others as a legal alternative to digital subs look like chumps.
at 11:22:00 am