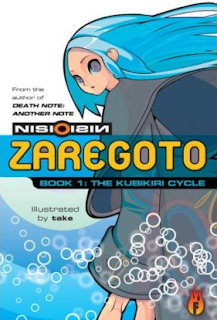 Zaregoto was a series of light novels released between 2002 and 2005, which told six stories over the course of nine books. It was written by NisiOisiN, the quirky mind behind the Bakemonogatari series and many other hits. Stylish illustrations contributed by artist take added to Zaregoto's appeal.

Back in 2008, there was a surge of interest in NisiOisiN's work in the west so along with some tie-in novels and compilations, US manga publisher Del Rey translated and released the first book in the Zaregoto series. The second book followed two years later... and that seems to have been the end of it. Whether the reason was poor sales or a side effect of Kodansha's complicated acquisition of Del Rey's properties, the second book seems to be the last we'll ever see of English-translated Zaregoto.

The story follows the adventures of an unnamed protagonist (he's addressed by various nicknames depending on which character he's speaking to, but his full name is never clearly stated in these two books). Ii-chan - as he's referred to by his close friend Kunagisa Tomo - is a very unusual guy; he's unusually detached from the world while having a truly terrible memory. He provides lackadaisical descriptions of everyday Japanese life from the perspective of someone with no particular hobbies or interests of his own. In contrast, Kunagisa is an unapologetically eccentric computer genius who lives as a shut-in. She's by far the most interesting of the two, but so enthusiastic and scatterbrained that Ii-chan's commentary is the only thing holding the plot together whenever she's around.

The first book, The Kubikiri Cycle, drops the reader right in at the deep end with a traditional murder mystery on a secluded island. I found the story rather chaotic; it's a blend of genres from crime, shounen action, philosophy and self-aware otaku comedy. Although dropping the two leads into an island setting made it easier to get to know them away from their everyday lives, it also made keeping track of the surprisingly-large supporting cast difficult - not least because they were all very strange individuals with a litany of personal quirks to remember. My lasting impression was that it was a flawed yet thoroughly enjoyable work. I wasn't able to put the book down until I reached the last page, once it had finally settled into a rhythm.

With the second volume, The Kubishime Romanticist, the author sets the story out completely differently. I felt that this worked much better, following Ii-chan back home in Kyoto and gradually introducing a very simple cast of characters. On the surface it's another murder mystery, except it's also the introduction to what I presume eventually becomes an overarching plot on a grander scale. Ii-chan's personality is also explored in more detail. I enjoyed The Kubishime Romanticist even more than the first book in the series. 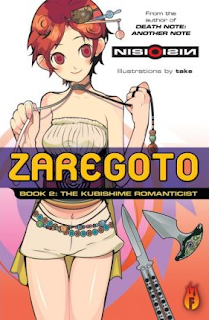 A sense of NisiOisiN's writing style came across well in the English edition, though it's quite exhausting to read because obscure geeky references and Japanese sayings aren't always as clear as they would have been in the original. A number of themes seem to crop up in his stories time and again; fans of his animated works will notice similarities between certain characters and imagery which crops up here. There's obviously a lot of the author's trademark wordplay in Zaregoto too, from the character names to the verbal sparring that runs through most of Ii-chan's conversations with other people. Some of this is retained in the English adaptation, but I'm sure a lot of it is lost in translation. In the end the script is a little awkward for sacrificing some of the original charm in order to be readable as an English language mystery story, while at the same time being too rich with Japanese pop culture material to ever really catch on with a mainstream audience. The translator must have had a very challenging time.

Zaregoto Book 1: The Kubikiri Cycle was originally available from all good booksellers, though it's recently become scarce and the asking price on the used market is increasing by the day. I bought my copy brand new back when it was still easy to find for the princely sum of 49p. From this I gather that it wasn't a hot seller in UK comic shops, at least.

Zaregoto Book 2: The Kubishime Romanticist is still priced more reasonably at the time of this review. It's out of print too, though, and I wouldn't be surprised if it joins the first book in time as NisiOisiN's work gradually gathers steam in the US thanks to Blu-ray releases of the anime adaptations of Bakemonogatari, Nisemonogatari and Katanagatari, not to mention Medaka Box in due course. As Del Rey haven't published any more Zaregoto books since 2010, and Kodansha have stated that they're probably not interested in releasing any more titles from Del Rey's old library, it doesn't look good for the series' future.

Still, if you don't mind knowing that the adventures of Ii-chan and Kunagisa will be brought to an end prematurely, the two books that are available do at least have decisive endings to the stories they contain. With NisiOisiN's popularity showing no sign of abating it's probably only a matter of time before Zaregoto is adapted into a quirky late night anime series or movie. That's what I'm hoping!
at 8:32:00 pm