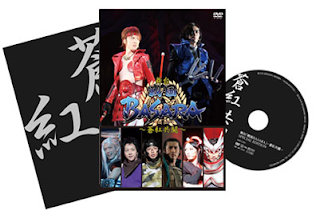 Today's review is the last of my Butai Sengoku Basara DVDs until the new one is released later this month.

The second Butai Sengoku Basara wasn't based on one of the later games but rather, once again, on the original Sengoku Basara. To separate it from the earlier stage play, it was given the subtitle 'Souku Kyoutou'. The only change to the casting was that Kataoka Shinwa was replaced by Hosogai Kei in the role of Sanada Yukimura.

Butai Sengoku Basara ~Souku Kyoutou~ ran in Ikebukuro's Sunshine Gekijou between the 9th and 18th of April 2010. The DVD was released on 16th July 2010 as a ¥7,140 special edition with a run time of 178 minutes (40 minutes of which is devoted to bonus footage). It included a stylish foil-embossed black slipcase and 36 page photo book. The photo book is thicker than usual and very glossy. Customers who placed preorders at Animate or Lawson received postcards or trading cards with their set. I'm not sure whether there was ever a standard edition for this particular performance; I've never seen one anywhere.

As well as the change of actors for Yukimura, this revival of the stage play promised some modifications to scenes from the original as well as a smattering of new content.

Once again the story is based on the downfall of Oda Nobunaga and it's noticeably darker (both literally and figuratively) than the more recent stage plays. It seemed as though all of the characters had more lines than before as nobody seemed especially neglected. My favourites this time were Kojuurou and Ranmaru; the latter's acrobatics were thrilling, keeping me pinned to the screen whenever he was on camera. Even though Shiina is quite a bit older than Ranmaru looks in the games, he has the perfect spunky attitude to pull it off.

Speaking of the camera, it was immediately obvious from the start of the performance that the camerawork for the DVD was significantly better this time around. The sound was crystal clear and the recording captured the action from various angles without any distortion. Even if the plot was the same, this factor alone made the ~Souku Kyoutou~ version of Butai Sengoku Basara much more enjoyable than the first outing; it was like watching a completely different play.

Being able to see the actors' facial expressions properly made it plain to see how much effort they were putting into their roles. On top of this, the returning actors seemed more comfortable this time around. It doesn't feel entirely fair to compare Hosogai's Yukimura to the original under the circumstances; Kataoka never had the opportunity to appear in the new version. Still, Hosogai fits in well with the others even in this debut and if I hadn't seen the previous show I'd never have guessed he was new to the cast. Although the floppy hairstyle is a little on the unflattering side, his Yukimura is full of enthusiastic vitality.

One disadvantage of the cleaner picture on the DVD is that it lets the viewer see the action on stage even more closely than the audience in the theatre would have been able to. Some of the costumes looked a little cheap as a result, such as the parts of Nobunaga's clothing between his belt and breastplate and Yukimura's flesh-coloured stomach-covering. Mitsuhide's wig and makeup still aren't quite right either, although they've been tweaked since the earlier stage play. Ranmaru's mimed bow attacks also looked even more ridiculous than before.

The only other nitpick is that there are some strange enhancements to the visual effects used in the live performance, such as fire effects and full screen text overlays occasionally. The on-stage effects aren't always visible on the DVD due to the lighting so they did this to make things easier to follow, but the CG used is very cheap-looking so the transition between the live stage acting and the DVD enhancements is awkward. Still, it doesn't happen too often so it's tolerable.

Thanks to the clearer picture and sound, I was fully satisfied with this DVD. As I mentioned before, it also contains forty minutes of bonus footage. Since the main feature ends with a credit role rather than the usual curtain call or farewell from the cast, I'd expected this to be part of the bonus material - it isn't.

Instead, there's a long 'special talk show' with the actors appearing on stage in costume to chat about the play with one of the extras. Naturally, the discussion is accompanied by a lot of fooling around. Accompanying the talk show is a pair of backstage clips with messages from the cast and staff, one filmed on the day of the premiere with everyone looking nervous and hopeful, and the other on the day of the final performance. All of the actors were in good spirits (especially in the later clip), even though some of the messages were being recorded in the dressing room while other people were getting changed in the background!

Most of what I can say about Butai Sengoku Basara ~Souku Kyoutou~ in a general sense was already covered by my review of the first play. This is the same again only bigger and better; its existence renders the earlier Butai Sengoku Basara redundant and it's a worthy addition to any fan's DVD collection.
at 10:44:00 am