It's another slow news day with Capcom announcing the final details for the DVD/BD versions of Sengoku Basara -Moonlight Party- and Butai Sengoku Basara 3 ~Setouchi Kyouran~. If I'm not mistaken these are currently the last Sengoku Basara DVDs which are scheduled to come out at all. There should be a few more later in the year after the various upcoming stage events have been recorded.

Last summer's television drama Sengoku Basara -Moonlight Party- will finally be released tomorrow (2nd February 2013) on DVD (¥13,650) and Blu-ray (¥15,750). It's going to be an enhanced version of the show with extra footage. 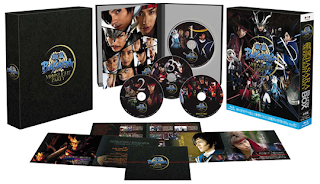 In addition, the first episode has been given a makeover with a director's cut and improved CG effects. The show's total length clocks in at 216 minutes with an extra 120 minutes special features. The first pressing will include a 16-page Sengoku Basara -Moonlight Party- booklet. No English subtitles have been announced, so expect Japanese-only audio with no other language options. 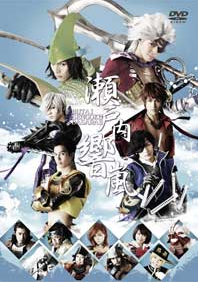 I never had the chance to watch the show when it was airing; can't wait to see it when I get my hands on a copy of the Blu-ray box set!

The only other piece of news today is that the cover for the Butai Sengoku Basara 3 ~Setouchi Kyouran~ DVD has been revealed at last. The blue and white colour scheme they've been using for promotional shots from this stage play has always looked great as a background for the brightly coloured costumes.

The show originally ran back in November 2012 and the DVD recording is due for release on 28th February 2013. The single-disc standard edition costs ¥6,000 and has a run time of 150 minutes. The limited edition comes with a separate bonus disc containing 40 minutes of extra footage and costs ¥6,500. The limited edition has been sold out at most shops online for a while now. The official stage play shop linked above recently started taking orders for the limited edition again for fans who missed out on the first opportunity.

The popularity of the Butai Sengoku Basara series doesn't seem to be showing any sign of waning!
at 10:46:00 am