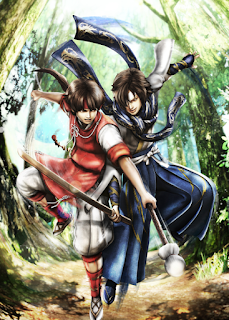 The 16th June 2016 edition of Weekly Famitsu magazine was released today in Japan and there was some brand new content for Sengoku Basara: Sanada Yukimura-den fans. The first page of the article featured a new rendered image of Benmaru and Bontenmaru fighting; not bad.

This led into the gameplay details for the adult version of Date Masamune, which had been strangely absent until now.

Masamune's new gameplay mechanic is similar to Bontenmaru's, which was revealed previously; in fact, it's specifically described as being an advanced version of it.

By powering Masamune up using Mad Drive, you can unleash 'Rampaging Dragon' mode. To use Mad Drive, the player has to hold down the button after each attack. This will add a follow-up attack to the move and gradually, as you chain more of these, a blue aura will start to surround Masamune to indicate 'Rampaging Dragon' status. This status significantly increases his attack speed and allows him to attack the enemy without offering them any chance of a counter.

Details of some of Masamune's other regular moves are also listed. The names are already in English which keeps things simple (and Masamune seems to have discovered lowercase).

Ground Dragon: Thrusting his six claws into the ground with force, Masamune releases a thunder dragon which snakes across the ground. Enemies that it hits will be drawn towards Masamune, allowing for further attacks.

Deadly Cross: Masamune makes a cross in the air and launches the enemy upwards. You can hold down the button to activate Rampaging Dragon mode, and also follow up with another attack.

Kill Shake: A chopping attack while Masamune spins quickly in the air. Holding the button down will increase his rotation speed, and consequently the destructive power.

His Basara move: Masamune draws the surrounding spirit energy into his own body and releases it as an azure wave, resembling a dragon. The rampaging wave brings about a massive explosion on the battlefield.

Magnum Dunk: Masamune charges while twirling his six claws, and any enemies caught up in the attack are struck to the ground. With the wide range of this attack it can be used to sweep away enemies standing in a line. Furthermore, by holding down the button you can increase the distance Masamune will cover with his charge.

There are also screenshots showing him with an extra move called Heart Bolt, and we can see the abilities both characters unlock via the Bushin system at Odawara.


The second half of the article focuses on stages and story details as usual. Masamune, still intent on conquering the land and fully prepared for death, heads to Odawara Castle to face Toyotomi Hideyoshi and Ishida Mitsunari, dressed in his white outfit emblazoned with a crucifix. Another panel shows Matabee and Sen No Rikyuu (Sabisuke) who will both be standing in Masamune's way. Meanwhile, Hanbee and Kojuurou are going to be trying to stop Yukimura as he rushes to see what's happened to Masamune.

Stage: Guide Masamune and Yukimura to the honmaru as they advance against Odawara Castle

Masamune is trying to get to the heart of the castle in order to face Hideyoshi, while Yukimura is desperately trying to stop him; the player will control both characters as they work through the stage. Yukimura is shown with a mission of having to break through the cavalry guarding Odawara Castle before unlocking the gate and continuing. A screenshot shows there are fifteen Date cavalry officers to defeat as part of that mission.

(Raindrops' note: I guess that's why there are so many Toyotomi NPCs confirmed - they want to make the enemy seem overwhelmingly powerful for the sake of the narrative, instead of having all of the factions appear to be similarly tough as they are in the main game series.)

Masamune and Yukimura are also shown in their 'classic' outfits for the first time since this game started its promotion, both as new renders and in-game. It seems that they'll be confronting one another at the Osaka Summer Siege that way, some time after the events at Odawara have played out.

Edit: The official website has since updated and it shows Wabisuke as well as Sabisuke. Masamune's costumes are labelled the Azure and White Cross versions, while Yukimura's are the Hinokaku ('Scarlet Horns'), Crimson and Phoenix versions.

It has been announced today that anyone who preorders their copy of Sengoku Basara: Sanada Yukimura-den from the official e-Capcom online store before 24th August 2016 will be automatically entered into a prize draw.

The seven winners of the draw will each receive an exclusive bath towel with one of the designs shown above. The chance of winning is relatively low, but what a unique bonus...

The time, the survey is asking fans to name the game with the characters they were most interested in by the 30th June 2016. This will be the fifth and final Basa-ranking survey as the tenth anniversary festivities wind down, so don't forget to vote!

More details about the BIC Camera in-store event this weekend

I mentioned the plans for an event in Shinjuku's huge BICQLO store a few days ago and we now have a little more information. Unfortunately, it seems that gameplay demonstrations from Sengoku Basara: Sanada Yukimura-den won't be available but producer Nonaka Daizou will be attending and talking to the audience about the game.

History fans who take a trip to Kofu this summer will be able to participate in an updated version of last year's successful stamp rally activity between 23rd July and 30th September 2016. More details should appear at a later date.

A tweet from Capcom has added a (very small) picture of a different mini towel available to fans who visit the Capcom Cafe during its Sengoku Basara campaign. This is different to the design which fans who attended the Machi★Asobi event were able to purchase. 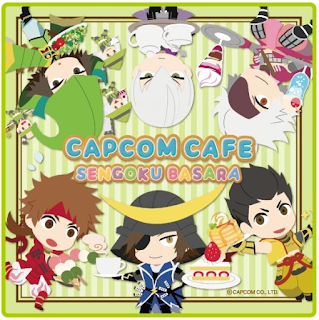 Remember that last Ichiban Kuji event where the 'teams' of characters which sold the most pictures would feature on some merchandise in a future lottery? The details of the followup event Ichiban Kuji MINI Sengoku Basara ~Hisshou Kigan!~ ('Inevitable Victory Prayer!') have now been published. For each ticket you buy you'll win a randomly-drawn prize and a code, which you can enter into a second draw for a chance to win one of twenty sets of 'charamide' pictures of the teams which topped the ranking.

There will be fifteen different omamori mascot charms available as A-rank prizes: 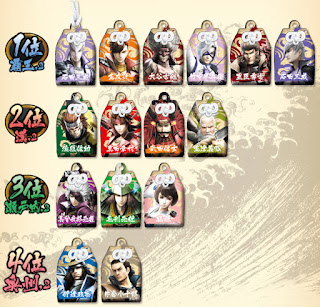 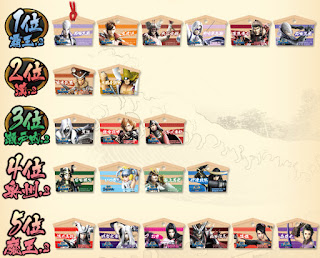 Since the teams which ranked highest included niche characters alongside the popular ones, it's brought about an odd situation where characters like Itsuki, Nouhime, Ranmaru, Kennyo, Musashi and Yoshihiro get to appear on merchandise over some of their substantially more famous counterparts. Cool.

This new lottery will run in hobby stores from 2nd July 2016 and each entry costs ¥500.

Read the new Sengoku Basara manga for free (in Japanese)

If you haven't had a chance to read the new Sengoku Basara: DOKUGAN manga yet and are holding out for a legal way to do so, there's good news since Akita Shoten have published the whole first chapter for free in Japanese on their site. Fans with some basic Japanese reading knowledge can enjoy following the insane story but it's also worth it for the crazy artwork alone (or even if you just really, really like Masamune's thighs).

I'm assuming it's available worldwide, because of all of the countries in the world the UK is probably one of the last that would specifically get access to a random Japanese action manga. Please support it so that they continue to publish the chapters for people who can't afford to import the fortnightly magazine!
at 4:58:00 pm