News roundup: A surprise character reveal for Yukimura-den, and some Japan-only events

Another character is confirmed for Sengoku Basara: Sanada Yukimura-den

Saturday was the date of the two Basara Club Fan Meeting 2016 Spring events in Japan, and according to numerous reports and tweets from various attendees Kuroda Kanbee will be showing up in the new game. He's almost certainly unplayable, but this is still good news!

I think they're still trying to push the three '-bee's by having them appearing in the same game again, which also partially explains Hanbee's presence. There's also the fact that Kanbee himself will still have relatively strong name recognition following the Gunshi Kanbee drama a couple of years ago.

In Japan over the summer and interested in picking up some limited edition Yukimura-den merchandise? The Sengoku Basara: Sanada Yukimura-den x Namco Event Shop 'Chara Pop Store' will be at the Aeon Mall Makuhari Shintoshin Store in Chiba between 9th July and 7th August 2016, before moving on to locations in Osaka and Sendai at a later date. Visitors can expect Sengoku Basara: Sanada Yukimura-den decorations, goodies and prize draws featuring the cute artwork produced especially for this tie-in. Some of the items mentioned include uchiwa fans, pennants and traditional purse-style ticket holders. 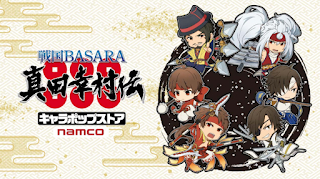 Yukimura-den goodies will appear in Osaka and Nagoya this June

Fans in Osaka have to wait a little longer for the Namco Event Shop to travel west, so in the meantime they can enjoy their own special collaboration. The main branch of the Hankyu Umeda department store will be hosting an exhibition in the Art Stage area on the ninth floor of the building between 8th June and 20th June 2016. The main purpose of the event is to celebrate Sanada Yukimura's world and the latest NHK Taiga Drama, Sanadamaru, but the Sengoku Basara tie-in is part of a Sengoku Goods Shop which will form one of the attractions. Entry is free and attractions include life-sized Sengoku Basara: Sanada Yukimura-den standees, videos and photography spots. In addition, visitors who spend more than ¥1,080 on Sengoku-themed goods will be eligible to receive an exclusive Yukimura-den postcard while stocks last. 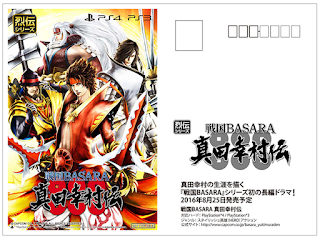 There will also be a pop-up Capcom Shop in the PARCO department store (south building, eighth floor) in Nagoya between 4th June and 26th June 2016, with displays, merchandise and standees featuring famous leading men from popular Capcom titles. There will be free stickers for those who spend more than ¥1,000 during their visit.

Finally, there's going to be some kind of in-store Capcom event at the Shinjuku East Exit branch of BIC Camera (BICQLO) on 5th June 2016. Full details have yet to be revealed but the games to be featured will be Gyakuten Saiban 6 (Ace Attorney 6), Biohazard: Umbrella Corps, Sengoku Basara: Sanada Yukimura-den and Monster Hunter Stories and we are being promised some words from the games' producers alongside gameplay - though there's no firm word on which of the games will be on show.
at 1:06:00 am