There wasn't much to report about Sengoku Basara: Sanada Yukimura-den last week; there were no new magazine articles and the last website update only added sound clips for the playable characters - most significantly meaning we were able to hear Sanada Nobuyuki (Hosoya Yoshimasa) and Sanada Masayuki (Ootsuka Houchuu) speaking for the first time.

Then KobaP dropped a hint that there would be some news at the end of the week, so I deliberately held my news roundup back to see what it was. Rather excitingly, the very first promotions for Sengoku Basara: Sanada Yukimura-den have been unveiled - and today we finally get to see the new character in action.

This trailer gives us a very welcome taste of the new fighting styles used by Sanada Masayuki and Nobuyuki.

A major collaboration has been announced between Capcom and the Nankai Electric Railway, which operates across regions associated with the Sanada family historically. The Sengoku Basara x Nankai Electric Railway: Summer Siege ~ Sanada Yukari No Chi He Iza Shutsujin~ campaign will run from 27th May to 30th August 2016 (the official webpage is scheduled to launch in a couple of weeks).

As part of the celebration, Tenkuu sightseeing trains on the Kouya Flower Railway will be decorated with Sengoku Basara: Sanada Yukimura-den artwork and the Ueda Electric Railway 'Sanada Dream Train' will be given a special Sengoku Basara Head Mark plate. The designs of the train wrappings will change on the 1st July and again on the 29th July, so fans who live nearby are encouraged to keep checking their local stations to see which characters go on display.

(Reading between the lines, perhaps this also means we'll get monthly character reveals since the way it's phrased implies the two future designs will have different characters?)

The Tenkuu trains will also offer commemorative photograph opportunities with pictures (probably standees) of the characters in the reserved seating carriage. 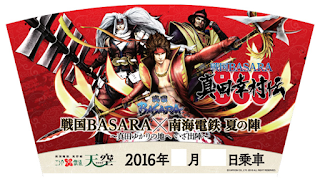 And travellers will be able to enter a mobile stamp rally contest using their Tenkuu tickets and QR codes located large standees in select station. 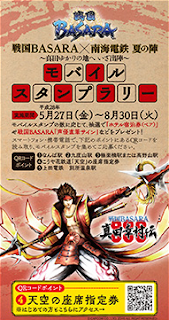 The standees are shown below. They're located in the Namba, Kudoyama, Gokurakubashi/Kouyasan (both stations have the same design) and Ueda Electric Railway Bessho Onsen stations, from left to right. 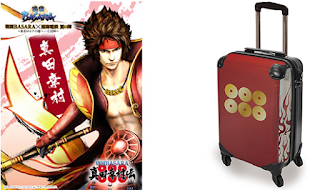 That's not all! The Kudoyama Sanada Museum is handing out exclusive train-themed clear files to the first 10,000 fans who visit and purchase a ticket between 27th May and 30th August 2016. 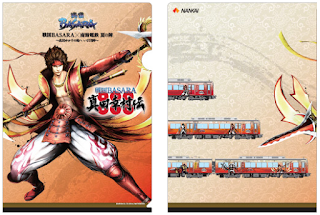 And there will be commemorative tickets available at Nankai Electric Railway stations, with special designs. 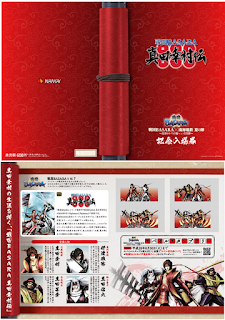 Lastly, seiyuu Hoshi Souichirou (Sanada Yukimura) will accompany series producer KobaP for a talk show as part of a special two-day sightseeing tour on 11th and 12th June 2016. The theme of the tour will naturally be the historical Sanada clan, but I'm sure there's a possibility they'll talk about the new game as well.

An exhibition (and talk show) is announced for Sanada Yukimura-den

The Sanada Juuyuushi Garden Place in Ueda will be hosting a special Sengoku Basara: Sanada Yukimura-den exhibition from 23rd April through to 25th September 2016. Entry is free, and the attractions announced so far include a presentation board explaining the game, Sengoku Basara: Sanada Yukimura-den promotional videos and standees of Masamune, Yukimura, Masayuki and Nobuyuki.

Most importantly, there will be a free talk show to discuss the game which will be headed up by KobaP and Hoshi Souichirou. The talk show will take place on Saturday 30th July 2016; hopefully there will be some interesting gossip shared on Twitter by those lucky enough to attend. 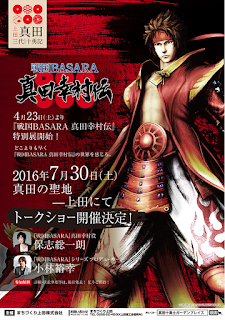 There will also be themed decorations in the restaurant to make the visit more fun, and special merchandise including these ¥500 randomly-packed tin badges:

And these ¥800 acrylic keychains: 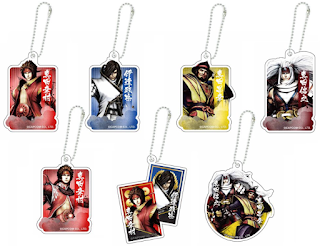 There are eight different badges and keychains (one design is secret). Fans who spend more than ¥1,500 on merchandise will be eligible to win additional Sengoku Basara goodies such as t-shirts. 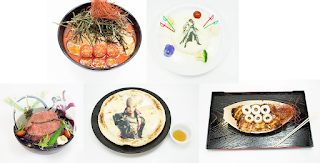 The drink options include mysterious ¥800 beverages named after Masamune, Yukimura, Masayuki and Nobuyuki or a Sengoku Basara bushou caffè latte, which comes decorated with one of nine possible designs.

Discounts are available if you order combinations of menu items (for example, a meal with a drink and dessert only costs ¥2,600). If you follow the official Sengoku Basara account on the LINE messaging service, you can show the staff to receive free Haagen-Dasz ice cream during your visit as well.

Customers who order from the tie-in menu will receive bonus items from a selection of sticker and coaster designs which will change three times over the course of the campaign. There are previews of the first batch of the rewards but the next sets are currently unrevealed. First, the stickers: 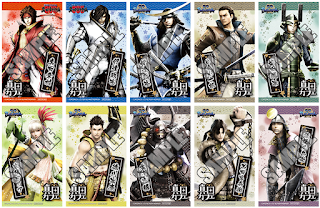 And here are the coasters: 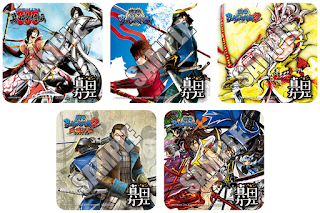 A report from the store can be found here.

(Hey, it's a Yukimura-den themed event so can we leap to conclusions about which characters they picked for the food items and act disappointed if they don't turn up in the actual game?)

Speaking of food, the Capcom Cafe has announced that its third batch of themed dishes and merchandise will be based on Sengoku Basara. 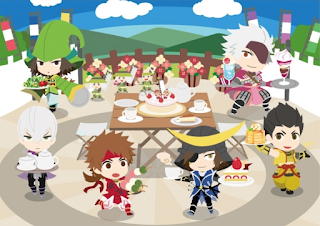 The cafe is located near Koshigaya Lake Town station in Saitama, and more details about the tie-in should be available soon. In the meantime, there will be a special selection of Capcom Cafe merchandise available at Tokushima's annual Machi☆Asobi pop culture event on 3rd and 4th May 2016, including early access to the Capcom Cafe x Sengoku Basara items below.

A clear file for ¥500 (the picture shows that it's printed to hide the background when you place paper inside): 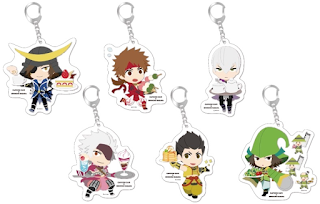 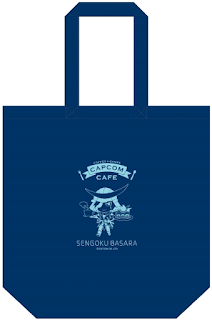 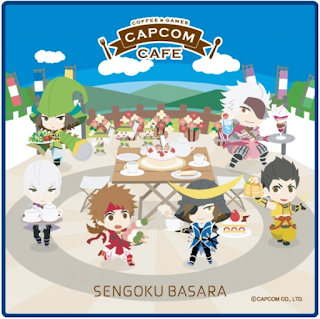 Various tin badges for ¥300 each (they're randomly given out as gacha prizes): 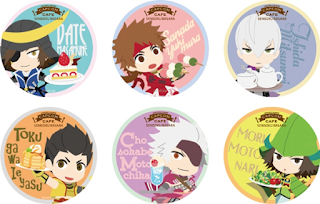 That's not all that Capcom has planned for the series at Machi☆Asobi. There will also be a Sengoku Basara: Sanada Yukimura-den exhibition! They're really promoting the game heavily now the new characters have been revealed at last.

Sengoku Basara teams up with mobile game SENTAMA for a competition

The latest minor gaming crossover event announced for Sengoku Basara is with DeNA's tactical combat smartphone game SENTAMA. Until 9th May 2016, SENTAMA players will be able to encounter six Sengoku Basara characters in the game: Masamune, Yukimura, Mitsunari, Ieyasu, Kojuurou and Sasuke. There will be other bonuses and incentives during the campaign, and you can see the full character artwork on the Dengeki website.

Fans will also be able to celebrate the game's first anniversary with a giveaway of six copies of the PS4 edition of Sengoku Basara 4 Sumeragi. 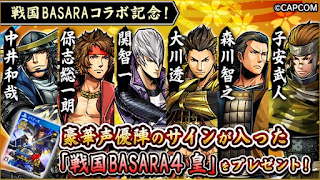 What makes the prizes special is that they have been signed by one of the series' popular voice actors: Nakai Kazuya (Masamune), Hoshi Souichirou (Yukimura), Seki Tomokazu (Mitsunari), Ookawa Tooru (Ieyasu), Morikawa Toshiyuki (Kojuurou) or Koyasu Takehito (Sasuke). 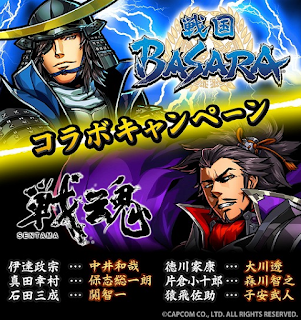 In addition, fans who follow the official SENTAMA Twitter account will be eligible to enter a retweet campaign this week to give away exclusive stickers and in-game gold.

This week marks the release of the first issue of Young Champion magazine to include a chapter of Sengoku Basara: DOKUGAN, which means the manga has officially begun! To celebrate, two new promotional images have been unveiled. 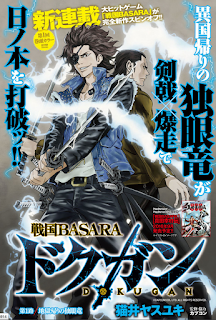 The 41-page first chapter is being given star billing in the magazine with a colour splash page and so far the reception from readers seems positive. 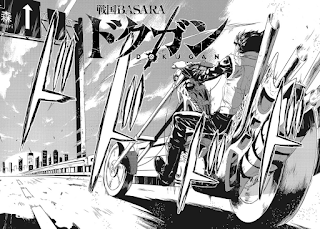 An update for the upcoming stage play's official website

July is gradually getting closer and the first teaser video for the Zangeki Sengoku Basara 4 Sumeragi: Honnouji No Hen play was released last week. The official website was also refreshed; they're using photographs of the actors in costume this time rather than CG artwork from the game series. It's nice. 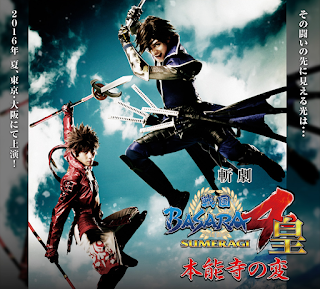 Even though most of these updates happened a while ago they were in the news again on Friday due to another announcement: additional actors and guests!

The stage play's full cast list is now as follows (newcomers are in bold, while newly-announced cast members are in italics):

Saitou Shuusuke is new to the cast and taking over from Katou Keisuke, who played Sakon in his only other appearance in the series. Nakayama Yuuki and Yamaguchi Tomoya are the two performers from boy band SOLIDEMO who appeared in the same roles as members of Aniki's crew in the previous play. It's good to have them back.

In addition, three of the series' most popular voice actors are now scheduled to appear during the brief bonus talk shows at the end of the play. Hayami Shou (Akechi Mitsuhide/Tenkai) is the special guest on 5th July, Morita Masakazu (Maeda Keiji) will appear on 6th July and Hoshi Souichirou (Sanada Yukimura) will take to the stage on 9th July.

Last but not least, the first proper promotional video includes some nice glimpses of the fun and hard work behind the scenes.