We've had a lot of updates about Sengoku Basara: Sanada Yukimura-den over the last few days so I'm posting earlier than usual to quickly round the details up. There'll be more information overnight as well.

Today's episode of Capcom TV has promised to include some Sengoku Basara: Sanada Yukimura-den gameplay with producer Nonaka. The episode broadcasts at 20:00 Japan time (i.e. very soon from the time this post goes online) so please check it out if you happen to be around!

Capcom TV can be watched on YouTube Live, Nico Nico Live and Twitch. Highlights are usually posted at a later date on the main Capcom Channel on YouTube.

Speaking of live footage, the second official Yukimura-den broadcast is next week on 23rd June 2016 at 20:00 Japan time. The stream link is now live at Nico Nico and you can reserve a Timeshift viewing there if you won't be around when the show airs.

Saaya will be presenting again with KobaP and producer Nonaka there to talk about the game. The special guest will be actor Matsumura Ryuunosuke, who plays Sanada Yukimura in the upcoming stage play. As well as the latest news and gameplay demonstrations we can expect a quiz and giveaways for viewers.

Weekly Famitsu will be announcing more gameplay modes this week

The preview for this week's magazine revealed a few tantalising hints about the new game, with more details to follow tomorrow (and in the usual official website update). As BlackKite has already posted about this, I'll just link to his translation and commentary here.

Famitsu will be hosting a special preview event called Famitsu Presents Sengoku Basara: Sanada Yukimura-den Summer Early Access Gathering on 2nd July (Tokyo) and 9th July (Osaka). 120 pairs of fans will be invited to hear a presentation about the game then try it out for themselves in the very first hands-on demonstration session. KobaP will attend the Tokyo event while producer Nonaka will be present in Osaka.

Entry is free and applications must be received by 20th June 2016.

From 23th July 2016, a range of collectible Sengoku Basara prizes from the Kyun Chara Illustrations range will be available in select Japanese amusement arcades. They're oversized decorative 'tags' divided into two sets of twelve designs, representing the Eastern and Western armies, and this time they're fighting over rice balls. Why not? A Twitter campaign will accompany the promotion. 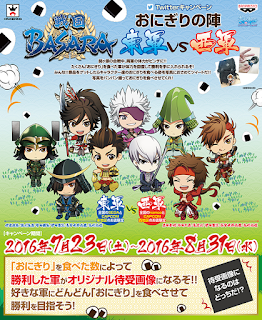 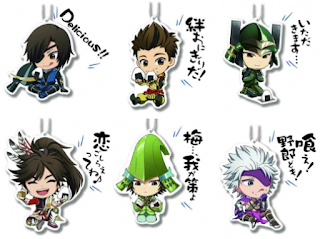 While Namco and Capcom locations have the Western Army: 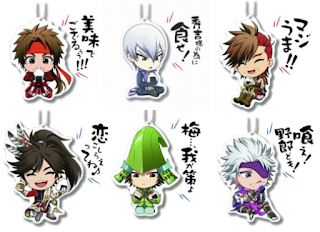 Eagle-eyed fans may notice that Keiji, Motonari and Motochika appear in both armies for the purpose of this promotion. So there are actually fewer than 24 designs in total.

Sengoku Basara costumes will appear in the Ace Attorney series?

Apparently there are signs that there might be some Sengoku Basara DLC in the newest Gyakuten Saiban (Ace Attorney) title! I look forward to future announcements if these plans go ahead.
at 11:26:00 am