Sengoku Basara: No translation for this week's magazine news, sorry

A few words about today's episode of Capcom TV

I managed to watch today's episode of Capcom TV with coverage of the game and there wasn't much to see. The footage was squeezed in after a massive Biohazard special feature to tie in with the recent E3 news, and the gameplay with producer Nonaka took place on the Tenmokuzan stage like before. 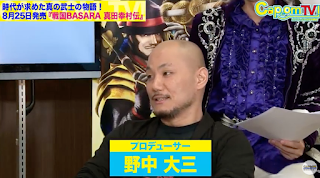 Still, OneSanitarium managed to spot at least one gameplay element which made it across from Sengoku Basara 4 Sumeragi, so it looks as though the additional skill revision moves from that game are long term additions to the characters who received them.

They're releasing an exclusive LINE smartphone wallpaper in each new episode of Capcom TV until the game is released. To grab this week's group shot of the Sanada family, simply send the word カウコンTV to the official Sengoku Basara LINE account. They also showed that you can get a picture of young Ieyasu by sending the word 少年, which isn't new or exciting except that I wasn't sure how to trigger that particular picture.

I can't translate the articles any more because people have been pirating Weekly Famitsu and digital sales are now locked to Japan only.

It was pretty obvious this would happen as long as people outside Japan were buying the digital magazines and sharing the files instantly online instead of everyone buying copies for themselves at the minimal cover price and sharing translations. This is why we can't have nice things. I'm sure other people will provide translations as usual, but the cost and effort involved has made it no longer worth my time; by the time the website updates I'll be asleep due to time zones.