I've just arrived home from my trip to today's Sengoku Basara 4: Basara Matsuri 2014 ~Shinshun No Utage~ event (hereafter 'Basara Matsuri'). I can't remember everything that happened, so a full report will come later once the event recording has been released on DVD; still, I hope that what I can recall now will be interesting to someone out there!

Basara Matsuri was held at the Nippon Seinenkan Great Hall in the heart of Tokyo. It was a small event with around 1,300 attendees at each of the two performances - naturally, obtaining tickets was a dreadful struggle which left many disappointed. To alleviate this, Capcom broadcast the second show of the day across cinemas all over Japan so that people who didn't manage to get tickets could still enjoy the atmosphere of the live event.

As this was technically the pre-release party for Sengoku Basara 4, the guest list was small and entirely made up of seiyuu from the game:

Series producer Kobayashi 'KobaP' Hiroyuki was also in attendance. Nakamura Yuuichi (Shima Sakon) had been scheduled to appear and had to pull out right at the last minute due to sickness. He's an extremely popular voice actor so this caused a lot of disappointment, which people tried to mask by wishing him a swift recovery on Twitter.

I arrived two hours before the doors opened even though it was ridiculously cold and windy in central Tokyo in January. In spite of this, the Mitsunari happi coats sold out while I was still in the queue for merchandise and the Masamune ones followed a few minutes later. There was a report that the Sakon coats sold out too, but the staff had a couple left later on - perhaps a few people decided against their purchases after hearing that Nakamura wouldn't be appearing? 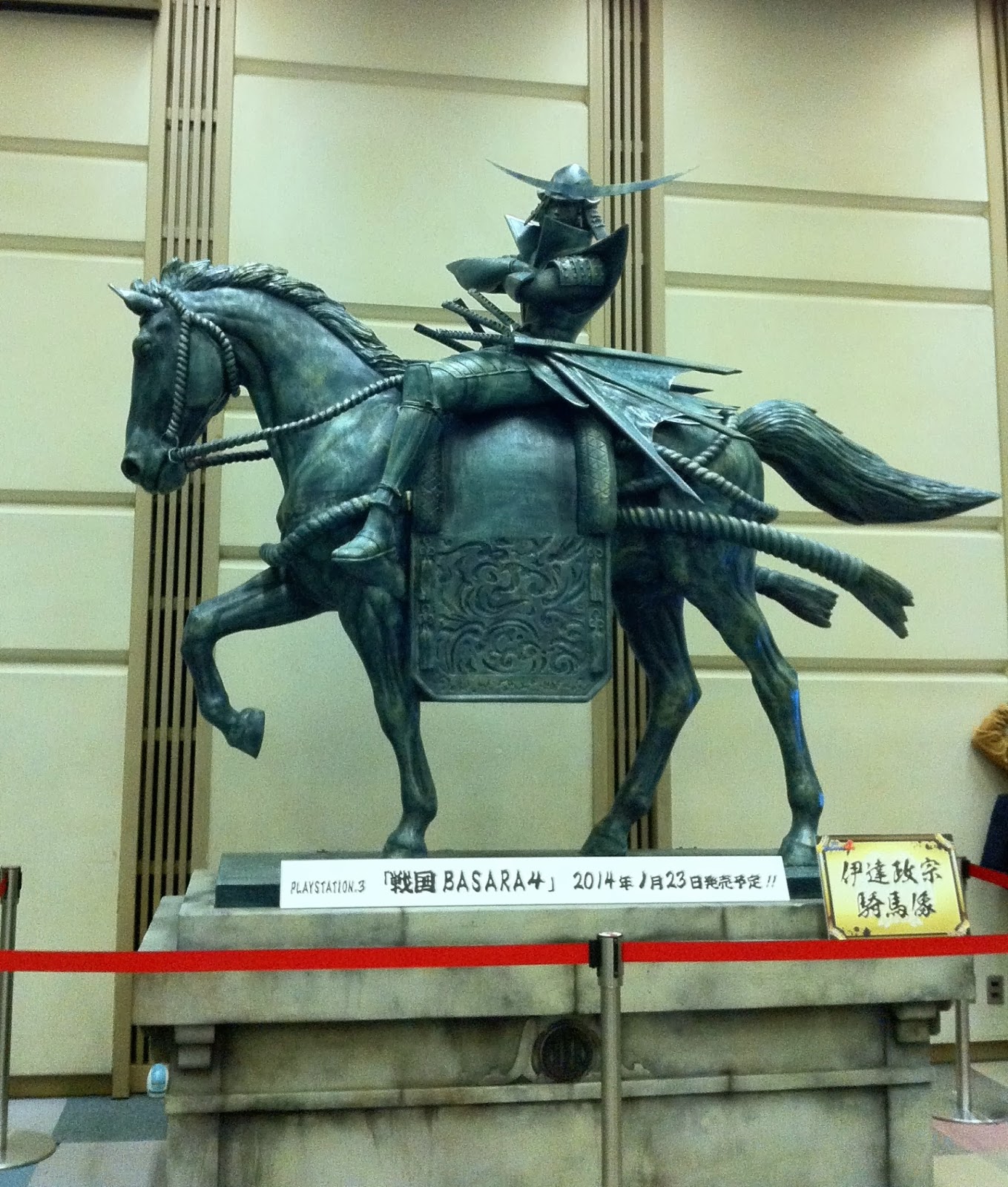 Anyway, I bought most of the merchandise I wanted and got to see the amazing Date Masamune statue they commissioned for TGS 2013 in the flesh. It's huge! The game demos at the venue used the TGS demo build of the game since it was too chaotic to control the crowds properly; I wasn't interested in the old demo build so I didn't bother queueing for a turn.

When the doors opened, I took my weirdly-low-down seat in the theatre hall and watched trailers for the game for close to an hour. If I wasn't already buying the game I'd have been brainwashed into doing so by now quite effectively. When I was queueing, it was hard not to notice that everyone around me was female (I saw perhaps five males in the crowd the entire time I was there). However, right in front of me was a large group of adult men dressed quite smartly. It wasn't until just before the show started that I realised I was right behind the press area and the men lined up in front of me were all representatives from the big gaming magazines. Furthermore, two seats in front of me was director Yamamoto Makoto himself! I could have leaned forward and touched him at any time during the show as he stared down at the actors on stage (if I wanted to terrify him, that is).

The afternoon show began with a laugh-out-loud hilarious skit with Mitsunari and Hideyoshi reading out the rules. This was one of the best ones yet! Hideyoshi demanded to know where Hanbee and Gyoubu were, and Mitsunari's excuses for what they were up to were ridiculous. Then, as they read out the rules about setting your phone to silent mode, Mitsunari's cellphone started to ring. He almost died of shame apologising to Hideyoshi. The crowd was laughing from the start of the skit to the end. 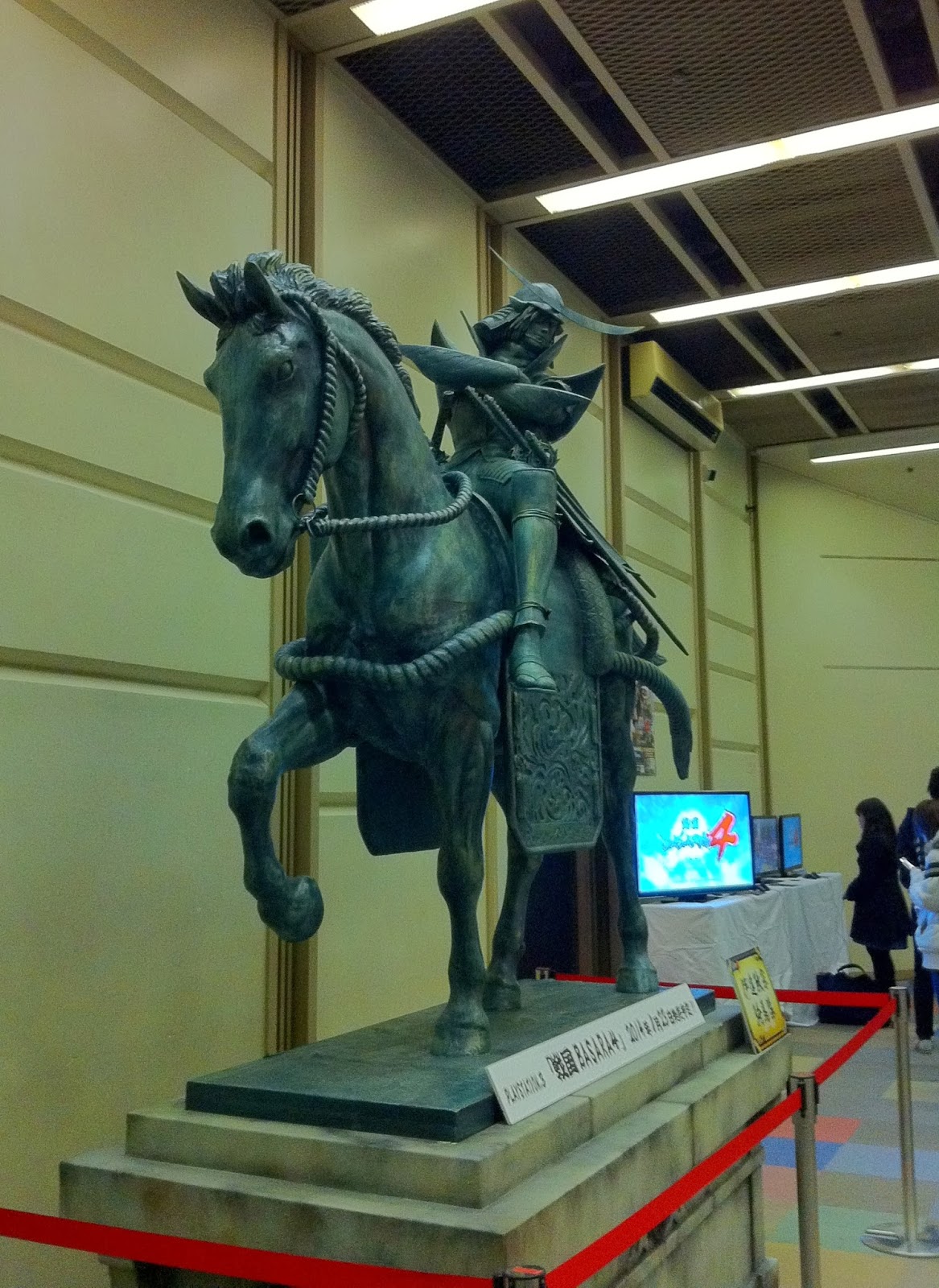 After the rules were explained the show opened with a stirring performance of one of the new BGM tracks from the game performed live on stage with wind instruments. As it played, a reel showing all (?) of the 'Basara-zu' ink painting artwork from the game was shown in the background. There was no text but I spotted a few I hadn't seen before: a ship, black feathers, a nabe pot, three fish, a crane, a spider in its web, a demonic face (it could have been a noh mask?), some kind of furious furry animal and a scary-looking eye. Please understand that they flashed up very quickly and I had to remember them for three hours before I could make any notes, so my memory might not be perfect! It's easy to match most of them to the characters they must belong to, and the rest can be worked out without too much trouble. I'll wait for the two-character Basara-zu titles which accompany them before adding them to my ongoing list.

The opening to the game came next with the music turned up to the highest, most exciting level. I've already seen it quite a few times in game shops and it's still fantastic, especially on a big screen.

Next came a selection of dramatic dialogues from various story encounters in Sengoku Basara 4; if I recall correctly they were Katsuie versus Hideyoshi, Matabee versus Masamune and Kojuurou, then Sakon versus Yukimura and Masamune. The parts performed by seiyuu who weren't at the event were prerecorded. Watching Miki reading out Matabee's quavering lines in person is intensely creepy.

The usual introductions and discussion segment followed. Morita and KobaP were both dressed in gorgeous traditional formal wear and trying to promote the New Year theme of the event. At the end of the chat the cast had to present a kanji character to describe their character: both Hoshi and Okamoto chose 'change' (which made everyone laugh at first since the word on its own can also mean 'weird'). Okamoto explained that Katsuie goes through a lot of changes, while Hoshi gave a rather rambling explanation about how Yukimura doesn't change - yet he changes a little.

Anyway, after Hoshi had confused everyone it was Seki who picked the best kanji: 'hair'. After giving the main reason (he's obsessed with Mitsunari's hairstyle and brings it up whenever he can), he gave a sweet alternate explanation that the kanji character represents Mitsunari's relationship with Gyoubu because it contains the radicals for 'long' and 'friendship'. Aww...

Next came some Sengoku Basara 4 gameplay in the form of a team battle between pairs of seiyuu. They had to play as their own characters on the Battle of Sekigahara: Eastern Sun stage in two pairs. They were trying to get as many kills as possible within 10 minutes, and after 5 minutes had elapsed they had to switch to their tag partner (played by their teammate). 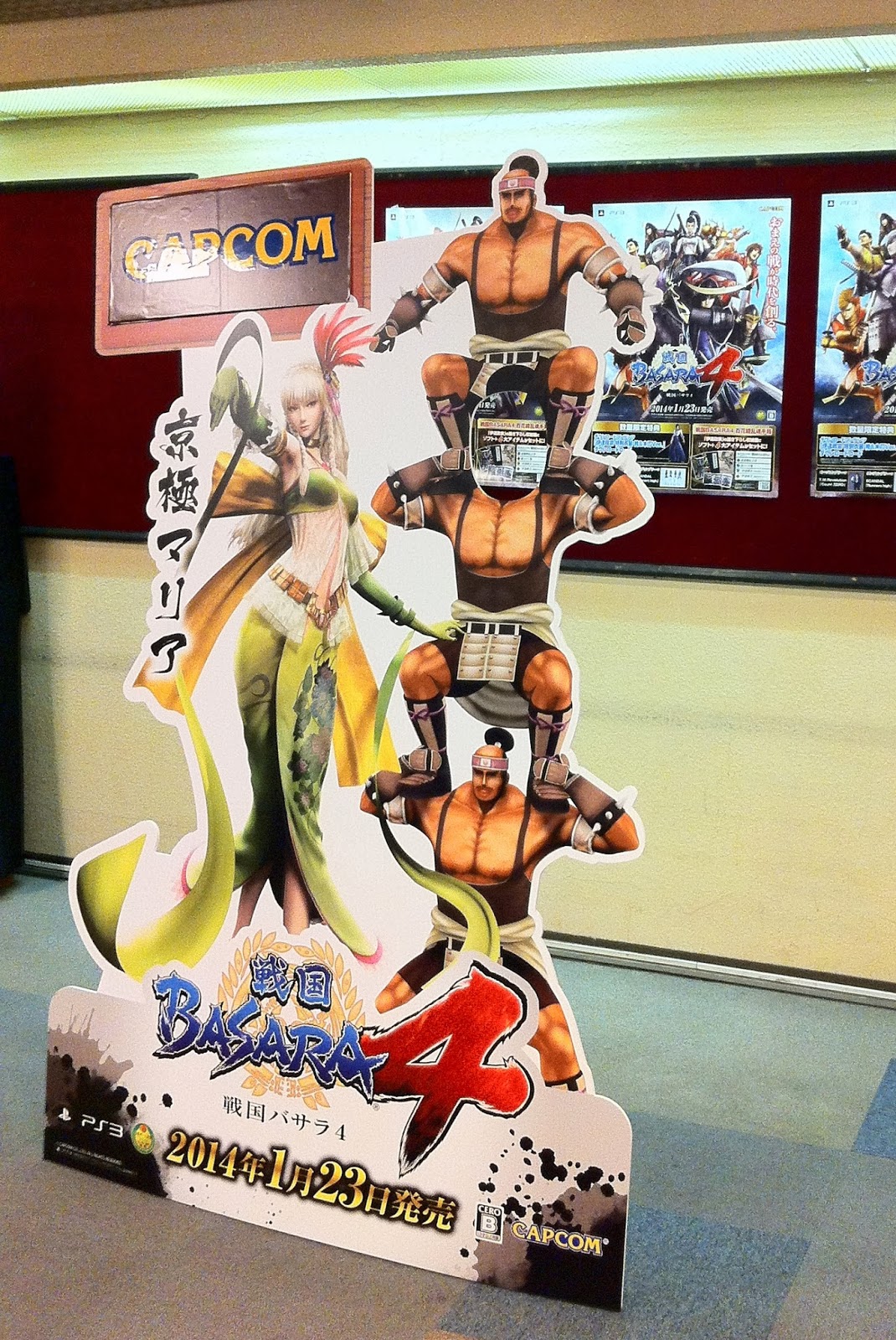 This was very funny as some seiyuu were much better than others - Hoshi didn't really know how to play. He got into a dreadful mess, shouting at Masamune when he kept attacking him and eventually dying to Tadakatsu. As it was tag mode he was able to revive himself and continue, and with the help of a Giga Basara and his teammate (Okamoto) having started them off strongly in the first place, the Yukimura/Katsuie team managed to win. Even though Hoshi's bumbling was adorable, it couldn't compare to the antics of the other team. Okiayu was giving in-character commentary as Hideyoshi while he played, then when Morita tagged in he started to criticise him whenever he screwed up with lines like "Keiji! That's me!"and "Keiji! Kill them more quickly!".

The short television commercials for the game were played while the stage was cleared, then KobaP presented his new batch of announcements. There will be Sengoku Basara 4 cough drops, prize draws, a tie-in with a bunch of Japanese Internet cafes, a huge advertising campaign in the world's biggest train station in Shinjuku, and a series of fan meetings through the official fan club.

There will also be a brand new television anime project. KobaP smiled at all of the inquiring faces and said he couldn't reveal the details just yet - I'm going to guess it will involve Production I.G. in some capacity though, since they've been contributing so much work to Sengoku Basara 4. Of course, it could be a Mame Sengoku Basara series...

Two new videos were presented as well. One was for the 'DMC Dante' version of Date Masamune, a downloadable costume available on 23rd January 2014 for ¥300. The people around me were all screaming in delight when the name appeared on the screen and this continued during the short clip.


The second video was a highlights reel from Sengoku Creation Mode starring Date Masamune, designed to attract people to the way that the stories are presented between (and during) battles. It showed Masamune's introduction then the player picked Shikanosuke's stage, so we had some footage from that. The main attraction of this video was actually the voiceover covering a little of the early part of Masamune's story with Kojuurou. Yet a short clip of Motonari flying through the sky on his airship when one of his stages appeared distracted most people in the audience...

KobaP begged everyone to keep the announcements secret until the evening show had started (the press reporters were doing the same) to avoid spoiling things for all of the fans who were going to watch it broadcast in cinemas. A final round of dialogue performances ended the show: Keiji versus Yoshiteru, Aniki versus Mitsunari and Yukimura and lastly Katsuie versus Sakon.

The second performance was similar to the first except that Nakai replaced Hoshi and a few things were shuffled around. The evening's opening skit was performed by Masamune and Katsuie; Katsuie awkwardly trying to repeat Masamune's English in his dull voice was very cute! At the end, Masamune wanted to call out to the crowd so he and Katsuie had to yell "Are you ready, guys?" together several times to get us to respond. It sounded so peculiar to hear Masamune's shout accompanied by a monotonous, unenthusiastic "Are you ready, guys?" from Katsuie...

In the talk segment, instead of describing their characters with a kanji word everyone had their character's fortune read for 2014. Poor Mitsunari ended up with 'misfortune' while Hideyoshi got 'great luck'.

The last major difference came with the gameplay battle. This time, the teams were Hideyoshi/Mitsunari and Katsuie/Masamune and the stage was Battle of Sekigahara: Western Shadow. Okiayu was struggling until he tagged Mitsunari in and passed control to Seki, at which point Mitsunari's natural skill at hurtling around racking up masses of kills came into play. Okiayu couldn't help gasping (in Hideyoshi's voice) that "Ishida Mitsunari is...great.". They won by a large margin. Like Hoshi, Nakai wasn't actually very good at the game and Okamoto's skill couldn't compensate for the difference in performance. 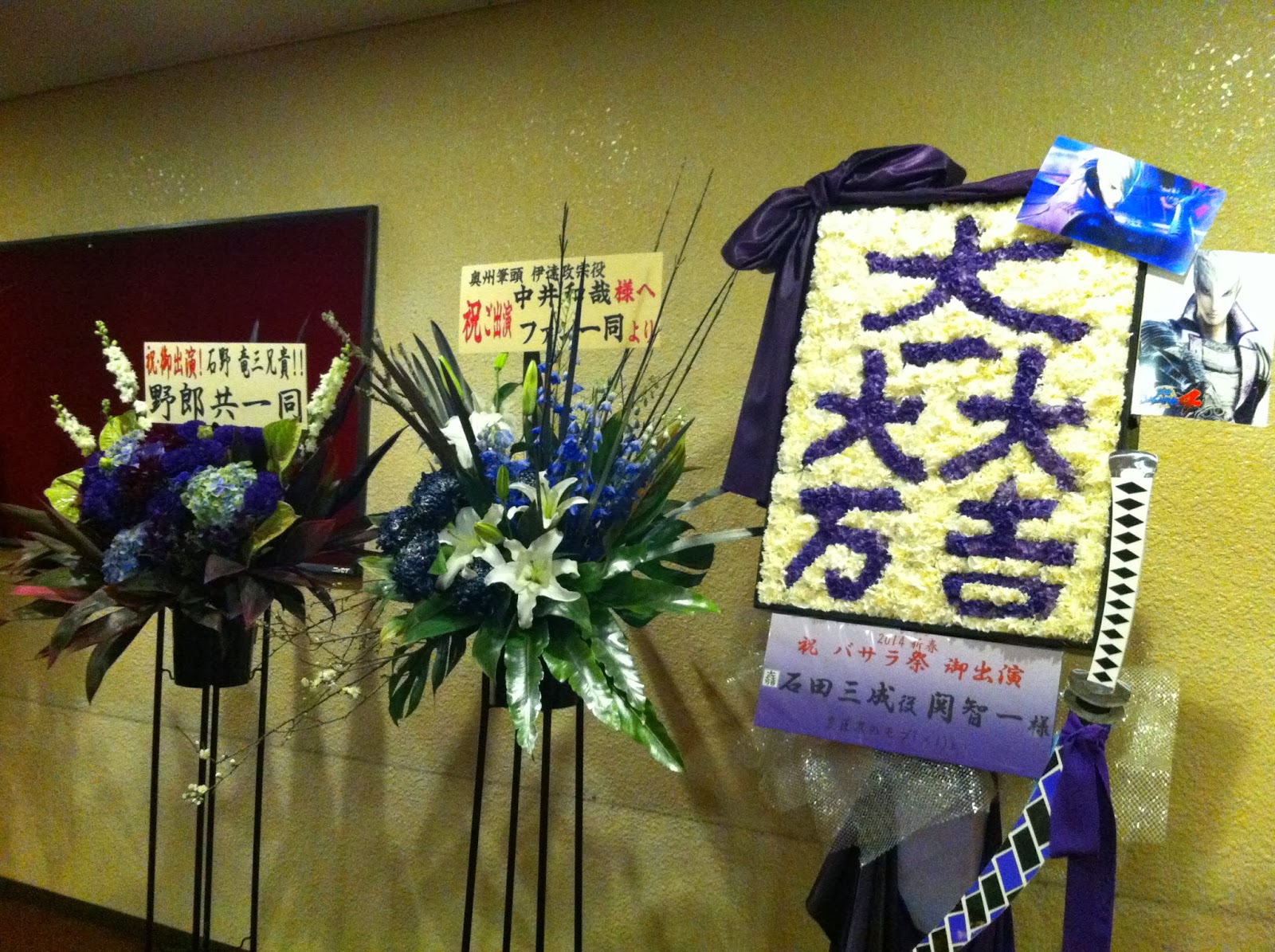 In case it isn't obvious, I had a great deal of fun at the event despite the dreadful stress of obtaining tickets through the annoying lottery system several months ago. It was a privilege to see the seiyuu performing in person once again, and I'm even more hyped for Sengoku Basara 4 (and the new anime project!) than I was before.

You can see some official press reports at the following links: Famitsu, Dengeki (2), Game Watch, 4Gamer
at 2:21:00 pm