Although I'm itching to spend every waking hour playing and compiling translated information for Sengoku Basara 4, I guess it's important that I keep up on my regular news reporting too. Capcom have mercifully avoided overloading fans with too much new information in the week following the game's release - yet somehow there's still a lot to catch up on!

A summary of this week's magazine coverage

Both Weekly Famitsu and Dengeki PlayStation gave Sengoku Basara 4 extensive coverage this week. Oyakata-sama even managed to get Yukimura's name right in Weekly Famitsu this time! Most of the articles were summaries of game tips and unlock information, with additional coverage of the recent Basara Matsuri and collaboration events. There are also descriptions of all of the joke weapons if anyone out there is flummoxed.

Separately, online gaming news site 4Gamer posted an interview of its own with series director Yamamoto Makoto and producer Kadowaki Akihito. YamamotoD described how using a newer version of the MT Framework engine allowed them to improve the graphics and display more enemies on screen (he even quantified it; Sengoku Basara 3 Utage could support around 30 enemies in front of and behind the player; in Sengoku Basara 4 that number can be 80 including enemies farther away). They wanted to create the feeling that you were really in a battlefield, though, so rather than simply increasing the enemies they added in different behaviours and patterns too.

(Note: Personally, and to address some of the criticism the game has received, I find the regular soldiers much more aggressive and worthwhile than in Sengoku Basara 3 Utage where I mostly ran past ignoring them when I wasn't building a combo. Having them clump into formations rather than spilling out everywhere does make it feel less like a swarm, though. I like it.)

The interview also mentions that they originally planned to include 39 characters - but KobaP wanted there to be 40 since it was the fourth main game. They really wanted to include everyone and felt bad when they were making the selection, but the most important factor when picking the roster was the potential for setting a stage spanning the era for the player to use to create their own Sengoku world.

(Note: If only 39 characters were on the original shortlist, poor Ujimasa presumably never had a chance...)

YamamotoD also commented that there was enough dialogue recorded for the characters' conversations on the march screen to fill an average drama CD.

This is by no means a complete picture, but it seems that Sengoku Basara 4 topped the sales charts at both the Tsutaya chain and on the Japanese PlayStation Network in the days following its release and then went on to report 176,313 copies sold via Media Create for the week ending 26th January 2014. The alternative Famitsu ranking gave the total as 157,326 copies (credit for the Famitsu link goes to BlackKite). Given the current state of the games industry I think that's a pretty good debut; hopefully it will continue to sell strongly in the weeks to come.

Unsurprisingly the next art book in the series is going to be the Sengoku Basara 4 Complete Works, which is apparently scheduled for release on 27th March 2014 at a price of ¥2,100. Listings should start to appear in other online shops over the next few weeks. I'm interested to hear how much additional content there will be for fans who have already picked up the special edition of the game and the V Jump guide book - at the very least it's likely to contain some extra interviews and illustrations.

The game's official soundtrack has now been released and the full track list can be viewed here. I'm not going to translate it all since I think there are pre-existing fan names for music from the series and I'll just make things confusing. Last year's Tougun BEST and Seigun BEST CDs have also been added to the iTunes store to help new fans pick up some of the classic Sengoku Basara background music without tracking down all of the old discs.

The future of the Mame Sengoku Basara manga is clarified

Meanwhile, the fifth (and final?) volume of the collected Mame Sengoku Basara manga is scheduled for release on 27th March 2014; perfect timing to draw attention to the new series. Let's all keep supporting Mame Sengoku Basara for as long as it runs!

Merchandise is announced for the Gakuen Basara spin-off manga

That's a lot of Mame Sengoku Basara news! But those who prefer their spin-offs to be parallel world high school comedies won't be left out, as Gakuen Basara fans will soon be able to buy some proper merchandise for the series. CafeReo is listing a few goodies for release in Animate stores from March 2014.

A pass case designed to look like a Gakuen Basara student handbook (¥980):

It includes two double-sided student ID cards, so you either can pretend to be Masamune, Yukimura or Mitsunari - or fill in your own using the blank design!

Both gold and silver versions are available. This should make authentic cosplay a little easier.

In Japan, it's traditional that boys give the second button from their school uniform to the girl that they like. These replicas are intended to be usable if you want to customise your outfits.

With these announcements, it feels as though we should be getting another new volume of Gakuen Basara soon - right?

Limited event merchandise will be made available for purchase

The huge paper fans which were sold at January's Sengoku Basara 4: Basara Matsuri 2014 ~Shinshun No Utage~ event have been made available for general purchase in limited quantities from February 2014. You can pick up the fans for Masamune, Mitsunari, Katsuie and Sakon at Ami Ami. 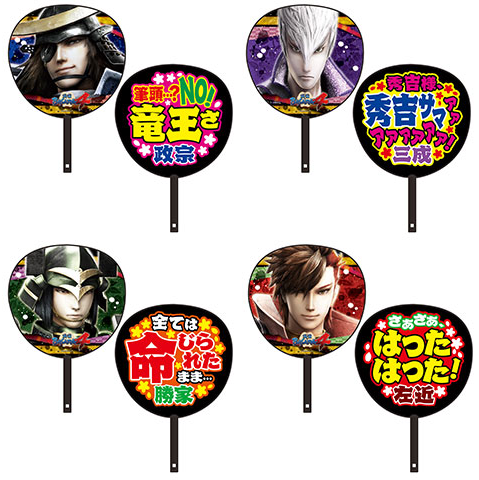 I never posted about it at the time, but there are also some special edition rice gift sets on offer for fans in Japan. They should go well with the packs of Sengoku Basara pickles released last year!

Basara Club members were notified about a new batch of merchandise today too.

There will be four different stickers to decorate your membership card or IC cards (¥500 each): 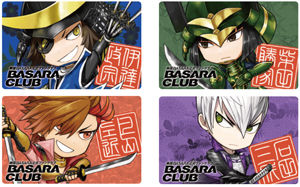 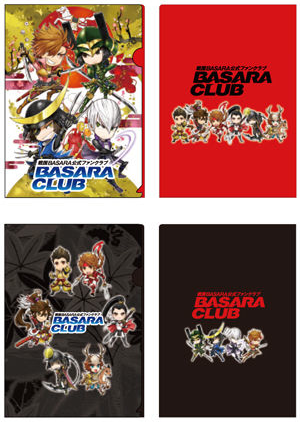 I can't afford to keep up with this series...

Anyway, I've posted what I think may be my last major update to my Sengoku Basara 4 reference guide for the time being - until people report that I've missed something important. It got pretty long. The people over at the Sengoku Basara wiki have been doing some great work using the translated information to produce proper guides (I love this one!) and the fans over at Koei Warriors have been busily writing up story translations to give people who don't speak Japanese some help. Other fans have been making videos, writing reviews, drawing pictures and offering encouragement; it's an amazing community.

The flurry of activity around Sengoku Basara over the past few weeks has been wonderful after the quietness a year ago, and the new anime should give the series another boost too. Hopefully those fans who are still waiting for their copies don't have to be patient too much longer; it's weirdly exciting hearing about other people ordering and receiving the game even when I already have it on my shelf.
at 10:13:00 pm