It's finally time for the release of Sengoku Basara 4!

Quite a few people have already received their copies so live streams and spoilers are appearing all over the Internet. People have posted alternate costumes, unlock details, trophy lists and all kinds of juicy details - which I'm trying to ignore until I have my copy of the game in my hand! One interesting note I have seen confirmed with a screenshot is that gamers who have saves for Sengoku Basara 3, Sengoku Basara 3 Utage and/or Sengoku Basara HD Collection on their PS3 will be eligible to receive some bonus weapon enhancement items and play books in-game instead of having to earn them the usual way.

In the meantime, here are the latest news updates.

Today's issue of Weekly Famitsu (dated 6th February 2014) has dedicated its cover to Sengoku Basara 4 as well as a generous number of pages within the magazine. A gorgeous advertisement spread over two pages helps make the game's release date feel more real, too. 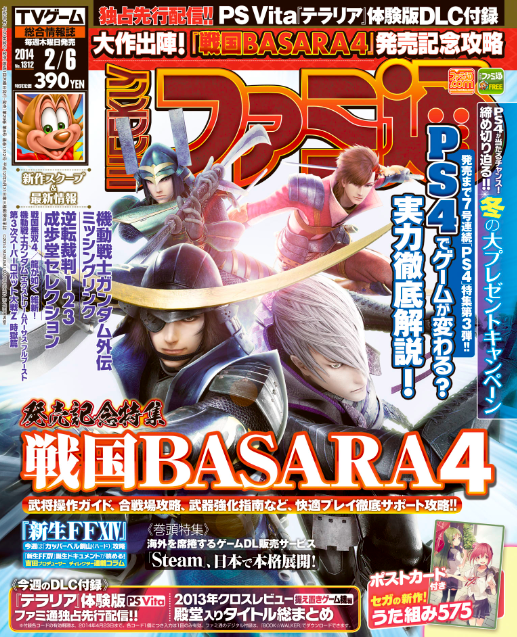 Inside is another introduction to the game and some tips to get players started.

Several people are already posting the unlock requirements for the characters which aren't available at the start on forums. I'll be adding this information to my guide in bulk as soon as it's all confirmed, but until then I'm only going to post the unlock requirements which are confirmed to be correct to avoid confusion. Weekly Famitsu confirmed two of these: to play as Gotou Matabee, the player must clear the game as Shima Sakon. To play as Yamanaka Shikanosuke, it's necessary to clear the game as Maeda Keiji.

There are also a pair of interviews; one with musicians SCANDAL and another with Kobayashi Hiroyuki and Yamamoto Makoto together. Neither says anything much that wasn't already known long ago, though YamamotoD recommends that seasoned players who want something more should make sure they check out Keiji's drama route.

Incidentally, it was poor Yukimura who suffered the indignity of a misspelt name in this issue. Someone at Weekly Famitsu really needs to brush up on their Japanese history!

Lastly, there's a list of items that will be available in the Basara-ya Online Shop (i.e. paid DLC):

Unrelated to Sengoku Basara 4, the magazine included an article about trends in the popularity of various Sengoku-era commanders amongst gamers. I figured that this might interest some people so here's a translation. First is the list of the top twenty from a survey of 2,805 gamers:

They also listed the ranking for non-gamers, though it was extremely similar. The only person who wouldn't have made the list was Matsunaga Hisahide as he ranked 21st for non-gamers (unfortunately, the person who would have replaced him wasn't shown). The gaps between each 'tier' of popularity were much greater for gamers; 24.9% ranked Nobunaga in first place while only 17.6% of the general public chose him, and for Date Masamune it was 20.2% of gamers to 14.2% of non-gamers. Again, the full information is missing but it seems that the general public spread their votes over a large number of warriors who didn't make the top twenty.

Analysis suggested that the Sengoku Basara series might be contributing to Masamune's high ranking especially as he ranks higher with women. Additional statistics showed the top five for male gamers (1,902 votes): 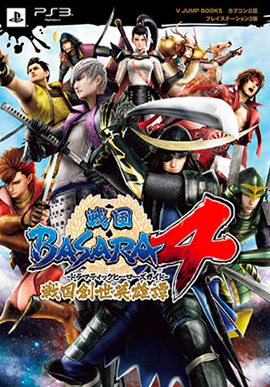 The usual authorised strategy guide for the game will be made available today too for those who want more information about the unlockable content and some nice pictures.

The 248-page V Jump guide is titled Sengoku Basara 4 PS3 Edition: Sengoku Sousei Eiyuutan Dramatic Heroes Guide and costs ¥1,400. It can be purchased from websites such as Amazon Japan, e-Capcom and HMV Japan. You should also be able to order it at any other store with its ISBN number (978-4-08-779680-3).

As well as the usual information, illustrations and tips, the book boasts three additional bonuses for buyers:

1. The one-shot manga which ran in Jump SQ a few weeks ago will be included in the strategy guide. I reviewed Kawahara Kanji's Sengoku Basara 4 ~Shima Sakon Ga Umareta Hi~ ('The Day Shima Sakon Was Born') a few weeks ago and it will be good to have a more durable copy for future reference.

3. The book will also include a code for a unique PS3 custom theme redeemable through PlayStation Network.

Interestingly the official content listing mentions a total of 39 stages, so some secret or alternate stages must be missing from the guide. We already know that there are more than 40 in the game from staff interviews.

This news article contains spoilers for some merchandise, so please skip ahead if you prefer 'secret' characters to remain hidden until after you buy something.

The new set of nine Mame Sengoku Basara trading figures started to appear on store shelves at the beginning of this week and I can now confirm that the secret character is sadly not Keiji as I'd hoped (why am I always chasing after Keiji figures?). It's actually just another Date Masamune except his outfit is white instead of blue, like the special edition Revoltech and one of the secret variants in last year's trading figure set. Oh well!

I can also confirm that the secret metal strap characters are Motonari and Motochika, and that both the collectible stickers and mini clear files have a secret variant with Masamune in the hakama costume from his 'BSR48' video. Meanwhile, the 'last one' variants of Yukimura and Masamune from the Ichiban Kuji lottery are the same as the normal ones except with a 'pearl' finish to the paint on their outfits.

I've been putting my time and energy into useful research during this holiday...

The two commercials (action and drama versions) have been playing on Japanese television and in train stations throughout Tokyo for a while now, and you can barely go anywhere in the heart of the capital without seeing Sengoku Basara 4 somewhere nearby. The marketing push for the game has been truly fantastic.

A short clip with KobaP and Mami from SCANDAL (the performers of the game's ending song) has also been uploaded.

Meanwhile, the hardworking fan team of Nine Demons Yoshitaka and PSandNintendFreak have produced a subtitled version of the third character trailer to help English speakers get a full idea of what's going on.

Tune in tonight for another official Sengoku Basara 4 streaming show

Tonight is the next episode of the official fortnightly Sengoku Basara 4 broadcasts, and the special guest is Okamoto Nobuhiko (Shibata Katsuie). He's really sweet and interested in the game so it should be quite a fun one to watch. The stream will start at 22:00 Japan time as usual.

There will apparently be another Hagi-Toko stream too earlier in the day. The dates posted by the Famitsu website were jumbled when I checked, so I think it begins at 12:00 Japan time. I won't be around to confirm nearer the time, so I hope that fans can find it if it goes ahead.
at 10:29:00 pm