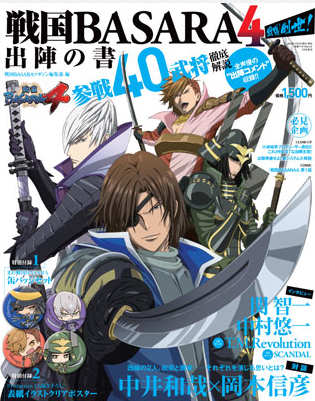 I'm calling it a book, but Sengoku Basara 4: Sengoku Sousei! ~Shutsujin No Sho~ is actually a glossy commemorative magazine rather than a durable guide. The official guide book will be released next week along with the Sengoku Basara 4 game itself.

Shutsujin No Sho, then, is more of a preview of the game to whet fans' appetites ahead of the big day next Thursday. It was released on 17th January 2014 for ¥1,500, and you can purchase it through all good import stores such as Amazon Japan, CD Japan, and Yesasia. This official preview article gives a good idea of what to expect from the contents.

Firstly, there are two sets of physical extras: four unique Mame Sengoku Basara badges for Masamune, Sakon, Katsuie and Mitsunari, and a clear poster which looks identical to the cover artwork without all of the text on top of it. Both are nice bonuses which help justify the price of this magazine.

Most of the magazine's content is made up of old information, unfortunately. There are character profiles for all forty warriors who appear in Sengoku Basara 4, and for some reason the first chapter of the official Sengoku Basara 4 manga adaptation by Yoshihara Motoko is replicated in its entirety - surely anyone who wanted to read it that badly would already have purchased Dengeki Maoh last month?

One thing I did find moderately useful was a chart at the beginning which shows which characters belong to each faction for the new game. Since I've seen a few people are confused, I'll replicate the important parts.

The following characters are all marked as being in the 'Ashikaga faction', even though they are still divided up into their respective forces within that category.

Another interesting snippet came in the form of an ad in the back of the magazine previewing the next issue of Dengeki Maoh. When it came to Mame Sengoku Basara, it had the text "The curtain falls on one turbulent era, and...?" and labelled it the "Final episode!?" (note the punctuation which wasn't there when it was first confirmed that it would be ending). It would seem that we may be getting an announcement on 27th January about the future of the series.

In terms of the seiyuu messages on the character profile pages, Miki Shinichirou mused about whether anyone other than him would find Matabee cute (I do!), Sakamoto Maaya worked so hard with Naotora's intense yelling that she was afraid she would damage her throat, Inada Tetsu joked that he originally thought that they picked him for Muneshige based on their similar looks, all three actors in the Takeda forces mentioned how this game was a big change from the seriousness of Sengoku Basara 3 and Koyama Rikiya gave his entire interview in character as Kanbee. Parts of it were censored out to avoid spoilers for the game, which somehow made Kanbee appear even more amusingly pathetic than usual.

Next came the other main attraction of this magazine: a series of longer interviews with various staff members.

The first was a joint interview with Nakai Kazuya (Masamune) and Okamoto Nobuhiko (Katsuie). They talked about how hard the series is on the voice actors, and Nakai added that even though the shouting is rough on his throat, the English lines are harder for him. They acknowledged that Hoshi and Ishino have it especially hard since they do a lot of yelling.

When Okamoto first performed his lines he was instructed to make his voice sound more hopeless than the capable one he was using. He made his voice very low so he was talking in little more than a whisper, and also remarked on the difficult words (the names of the various mystical creatures Katsuie often refers to in his dialogue). Okamoto struggled to read the kanji for some of the obscure monsters that Katsuie mentions.

Okamoto really hopes people will consider giving Katsuie a try; he's not as easy to warm to as the cheerful Sakon, but perhaps after playing through as Masamune first then Sakon second, people might take a chance on Katsuie the third time they play the game. Nakai was amused by this humble request.

Nakai compared Katsuie meeting Masamune to Masamune's relationship with Kojuurou, saying that he thought there was a link in the way both men were incomplete and struggling before they had their respective encounters. With regards to the scene from Masamune's past where he meets Kojuurou, Nakai joked that he hopes people don't have an image of a beautiful young boy with a pure voice for the young Masamune since he doesn't sound much younger than the usual version - he then reassured the readers that the staff knew how important this scene was to the fans. Of the other new Sengoku Basara 4 characters, Okamoto is interested in Shikanosuke and then Matabee. Nakai is interested in Matabee as well.

The next interview was with Seki Tomokazu (Mitsunari). It was a lot shorter. Seki was very playful with his answers; when the interviewer said that Sakon was completely different to Mitsunari, he replied by saying that it would be terrifying if Mitsunari had a subordinate who acted the same way he did. He also said that he (Seki) would probably get along best with Keiji or Ieyasu (!) if he was transported into the world of the game.

The final seiyuu interview was with newcomer Nakamura Yuuichi (Sakon). When he was recording his lines as Sakon, the staff told him not to let the script hold him back too much and to play around, so he gradually loosened up and became more flippant. To Nakamura, one of the biggest charms of Sakon's story is the way he changes after meeting Mitsunari. He finds it interesting that Sakon is loyal to Mitsunari rather than to the supreme commander of the Toyotomi forces, Hideyoshi. Other than Sakon and Mitsunari, Nakamura is most interested in Yoshiteru and Shikanosuke.

T.M.Revolution's Nishikawa Takanori provided a short, funny interview, in which he mentioned that he was going to keep trying for his goal of appearing in the series himself and said he was interested in Yoshiteru and Naotora. He kept dropping hints about his wish to join the cast and addressing them directly to KobaP. Afterwards, the girls of SCANDAL added a message too. They all mentioned their favourite characters; Haruna liked Keiji, Tomomi said that Tsuruhime's costume was cute, Mami paid respect to the real-life Nobunaga and said she thought he was cool and Rina picked Matabee for the dark impression he gives off.

The last interview of all was with series producer Kobayashi 'KobaP' Hiroyuki. It was mostly repetition of old information but there were some new parts.

All in all, the magazine was well worth the ¥1,500 it cost me. It's not all that rich in new content so anyone thinking about buying a copy might want to consider it carefully - however, it will probably be quite difficult to track down once it sells out since it's not a book that will be kept in stock long term.
at 11:53:00 am