I now have today's Weekly Famitsu magazine (dated 30th January 2014) so here's a quick run-through of the contents which relate to Sengoku Basara 4. I'm still on the road so this is a hasty summary.

Sengoku Basara 4 is now in 6th place (down from 4th) in Weekly Famitsu's chart of most wanted new games. It has received a Platinum score in its formal review this issue with a total of 35 points.

Leona Ebihara: The comedic elements and heated developments as the game progresses are enjoyable, as are the battle comrade system and variations in battle tactics. The branching drama and anime routes expand the scope of play. (9 points)
Jigoro☆Ashida: The way that the stages which appear in Sengoku Creation mode vary is fun. The battle comrades and enemy formations made the action seem broader. The rewarding feeling given by the weapon fusion and upgrade system was also noteworthy. (9 points)
Honma Urara: As you play through stages there are changes in your rival(s) and the scenario, and there's a dramatic sense to the direction. The new battle tactics which come out of the unique stages and enemies make it more fun, along with being able to instruct your ally. (9 points)
Rolling Uchizawa: It's a silly game (in a good way) with a unique way of looking at the world. The comedy and flashy drama ensures that the player won't be bored, and there's a lot of variety in issuing instructions to attack enemy formations. However, the way that things develop are familiar and there's a sense that it's just button-bashing. (8 points)

One feature asks game professionals, stores and users to give comments on a few titles (including Sengoku Basara 4). A few interesting ones...
The main article itself is a recap of all of the game features which have already been highlighted in previous issues of the magazine. The DLC which was touted before turned out to be a 63-page electronic supplement which recaps every single Sengoku Basara 4 article from the pages of the magazine since its announcement. It's not in-game DLC.

The next issue of Weekly Famitsu will continue the Sengoku Basara 4 coverage with an interview and strategy information. 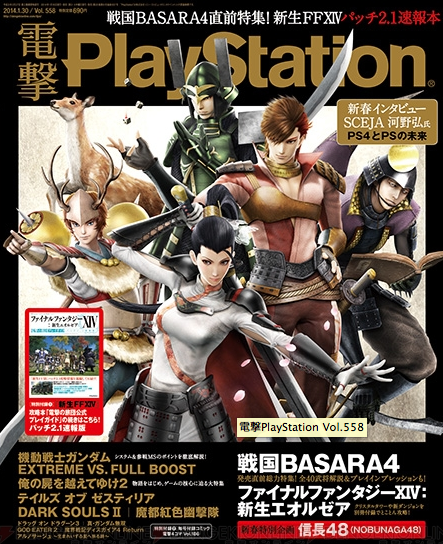 The new issue of Dengeki Playstation (volume 558) out today has a major feature on the new game, too. Sengoku Basara 4 has made the cover of the magazine for the second time.

It's the Dengeki Playstation coverage where the second batch of rumours BlackKite found originated. The game's lead staff members, KobaP and YamamotoD, both gave special comments for publication in the magazine. KobaP's statement ends with this:

As I said before, I think that the guess for _ _ is probably Butai as BlackKite's source surmised, and we're going to get another stage play. It would make sense. The other two are going to be a surprise.

The rest of the Dengeki Playstation coverage is a recap, like the one in Weekly Famitsu. There are a few pictures of stage interface elements which I don't think I've seen before, though they're small and waiting for the website updates later this week will probably be more worthwhile than tracking them down sooner. The game is currently in 3rd place in Dengeki Playstation's chart of upcoming titles and there'll be strategy information for some of the new characters in the next issue.

A photograph is making its way around 2ch and Twitter showing the alternate costumes for Katsuie and Mitsunari (as well as the Sakon and Masamune ones we've already seen). These should be regular alternate costumes rather than DLC. The source is Weekly Famitsu - the pictures appear in the article, so it's definitely legitimate.

Capcom updated their news website yesterday to reveal two launch events which will take place on the day of Sengoku Basara 4's release next week. Fans who purchase the game at one of the two participating shops or their affiliates can turn up at noon on the day of release for a chance to win merchandise, autographs and even meet staff from the game series. In addition, fans who discuss the game on Twitter are eligible for a special mobile wallpaper showing Masamune in his wooden sword costume.

Series producer Kobayashi 'KobaP' Hiroyuki will be present for the Tokyo launch event while director Yamamoto Makoto will be at the Osaka one. The venues are Bic Camera's Shinjuku Nishiguchi store in Tokyo, or Joshin Denki Disc Pier in Nipponbashi, Osaka.

Capcom have been putting a lot of effort into marketing recently (the game featured in a recent Yomiuri newspaper evening edition) so I hope the events are well-attended.

The Capcom Channel is continuing the daily countdown to the game's release with a gameplay video showing Matabee on Kanbee's Hinomoto Tunnels: Josui Line stage. Not sure how I feel about the long minecart section as I'm terrible at shooting...