News roundup: Minor updates just in time for the end of the year

I was hoping for something really interesting to happen to give me a decent leading story for this batch of minor news stories, but it wasn't to be; the combination of Winter Comiket and the impending New Year holiday period have made it unlikely there will be anything new to report for a few days. Here are the latest Sengoku Basara 4 developments and rumours in Japan.

Perhaps more interesting to those who follow the game industry in general than to Sengoku Basara 4 fans, Weekly Famitsu magazine has published details of its next issue (released 9th January 2014) and there will be an interesting special feature. Sengoku Basara 4 producer Kobayashi 'KobaP' Hiroyuki will join Sega's Yokoyama Masayoshi (Ryuu Ga Gotoku: Ishin) in a New Year discussion of some kind. There might be some juicy inside information about both series to be found within the comments from the two producers...

A few people asked about the special Sengoku Basara 4 leather pouches, and now gaming websites such as Famitsu and 4gamer have published their previews. The two 'Giga Set' versions of the game which include these pouches can be preordered at the e-Capcom store for a considerable fee.

Importers can pick up the pouches with the Saikyou-Chouhan (Mitsunari/Sakon) and Ryuuou-Kamewari (Masamune/Katsuie) editions of the game at Play-Asia for a limited time. Please note that these editions don't contain all of the physical extras from the Hyakka Ryouran Tamatebako sets; just the game, DLC codes (outfits for Masamune and Ieyasu) and the pouch.

Thanks to some early listings at bookstores such as Manga Oh, the next issue of the magazine has been confirmed for release on 27th February 2014. Coming after the release of Sengoku Basara 4 they're gearing up to include a lot of information about the game along with all of the other content that was promised. Mitsunari will be the cover star as previously reported.

I anticipate that preorders will begin to appear elsewhere over the next few days.

The magazine's website received a few stealth updates recently too. I can't remember whether the PDF advertisement for the next issue had so much detail before now? There's also a much bigger preview for Yoshihara Motoki's new Sengoku Basara 4 manga series.

One of the new links on the official magazine's website is to a preview of the upcoming Sengoku Basara 4: Sengoku Sousei ~Shutsujin No Sho~ guide book which includes samples of the four pin badges it will include.

Masamune, Mitsunari, Katsuie and Sakon are all included with the guide book. Fans who want to collect Yukimura, Ieyasu, Matabee and Shikanosuke will have to look out for the March issue of Dengeki Maoh magazine (released in late January) instead.

Mame Sengoku Basara artist Sumeragi also posted a picture of the badges on Twitter which gives a better look at the illustrations. The Sengoku Basara 4 characters making their debuts in the cute super-deformed mame style look great!

Speaking of the Mame Sengoku Basara series, more pictures have been posted showing the trading figures being released in January. They're cuter than ever. 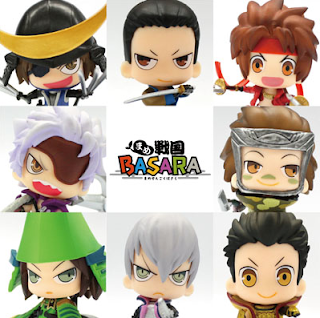 There's also a picture of the individual box each figure comes in. 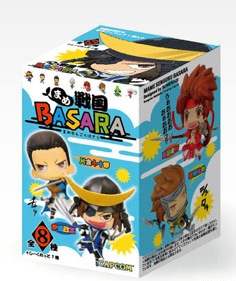 The figures can still be ordered in sets from importer-friendly sites such as Yesasia and Ami Ami. Preorders have closed at some other online stores, so it's advisable to place an order soon!

I'm including this just in case anyone eligible happens to see it! The My Capcom website is running a competition at the moment where thirty lucky fans will be able to win copies of the game as well as the opportunity to provide feedback in the form of special surveys. Please note that you will need a Japanese address to receive the goods, plus enough confidence in Japanese to be able to respond to the questions they will ask later on.

Rerelease due for the Bushou Sticker Collection Box

If anyone missed the Bushou Sticker Collection Box from earlier in the year and has money to burn, it's set to return in February with a restock. As far as I know the specification is exactly the same as before so I'll just post a link to my previous description. The new boxes can be ordered at Ami Ami.

Animate will host a special Sengoku Basara 4 display in January

Major retailer Animate has announced that its Shibuya store will be running a pop-up shop for Sengoku Basara 4 goods between 9th January and 26th January 2014. There will be decorative panels (standees) on display and a screen showing the promotional video(s). Customers who spend more than ¥1,000 on character goods in the store will be eligible to receive an exclusive Sengoku Basara 4 bromide, and later on there will be a special A4 clear file for fans to purchase. 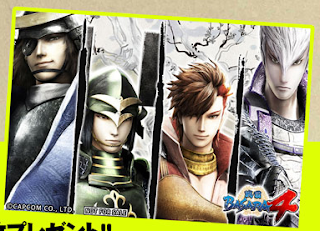 In addition, from 18th January until 9th February 2014 fans in the Kansai region will also get a chance to enjoy the campaign when a pop-up shop will be set up in the Osaka Nipponbashi branch of Animate.

After the weekend I'm going to be slower at keeping up with the news for a while due to being out of town, so I want to take a moment to wish my fellow Sengoku Basara fans a very Happy New Year! It's very exciting to think about how it's only a few weeks now until the new game will come out...

Thank you all for the lovely comments, discussions, ideas and more, and for putting up with my many typos. I look forward to following the continuing conversations on the various fan websites even if I might not be able to participate very often until I get back.
at 8:10:00 am